by Jessica July 18, 2011
I currently have the world’s worst sunburn. Well, that’s probably a lie. I slightly dramatize every single aspect of my life and my red forehead, chest and shoulders are taking the heat today. Literally. But I went walking without any sunscreen on (stupid stupid!) yesterday and let me tell you… not a wise choice for someone who could be passed off as a True Blood extra. That really has nothing to do with these fruit pizzas I want to re-shove in my face, but I needed to get it off my chest. No… really… someone get this sunburn off my chest.  Or else I will complain for the next 96 hours. 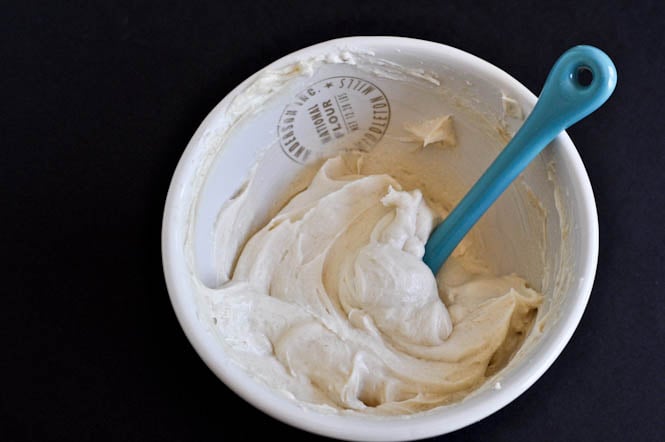 So. I like pizza. I like fruit. You probably like pizza and fruit too. I like eating cute little things. Mainly because you can eat a lot more and it doesn’t count. But you already knew that. Just felt like it was worth repeating after we took down an entire box of Trader Joe’s vanilla bon bons in less than two minutes last night. But I neeeeeed this pizza today. I seriously do. See all the e’s? I’m needy. I need you. In fact, I need you to come make this pizza for me. Maybe we can eat it together… ? I’ll pay you in aloe vera rubs. That sounds nice… for me. I knocked this idea off of my traditional fruit pizza that is a scrumptious sugar bomb.

I love that stuff. But I love these better. They are cuter. Prettier. Tinier. Mini-er. More lovable and slightly better for your waistline. I like.

And you get to eat a giant biscuit-like cookie that is… whole wheat. Win! In a bowl, mix flour, baking powder, 3 tablespoons brown sugar, salt, cinnamon and stir. Make a well in the middle and add olive oil and milk, mixing with a spoon until a ball forms. Using your hands, combine it until it comes together and shape it into a ball. Separate it into 4 equal sections (I actually used a kitchen scale and portioned it into 2.5 ounce balls of dough), then using a rolling pin or even your hands, flatten and shape it into a small circle. Mine were 3 1/2 – 4 inches in diameter. Rub each side with cinnamon sugar and place on a baking sheet. Bake for 10 minutes, remove from oven and let cool completely.

While crusts are cooling, mix cream cheese and brown sugar until combined and creamy. Chop fruit of your choice. Once crusts have cooled completely, spread each with a few tablespoons of cream cheese and top with fruit. I like the idea of having a dessert pizza “bar” and allowing everyone to make their own.

Note: this crust results in a more biscuit-like crust. The pizzas can be made ahead of time, however the crust will soften a lot in the fridge. It still tastes delicious and we ate one the next day.