I woke up four hours later than usual.

Ate three apples between the hours of 11AM and 4PM.

Made this quinoa because I wanted a fourth apple… but not plain.

Literally stayed in my pajamas until 8PM. (Uh, why did I get out of them?)

Drank a bottle of wine while watching the history channel… all by myself.

Spent a good 45 minutes after that searching for another JFK special to air.

Then watched my husband ingest an entire 1/2 gallon of fruit punch that he bought, spiked with rum.

He had to wear two Breathe Right strips to bed that night because have you ever slept next to a chronic snorer after they’ve had a few drinks? I could take my sleeping bag out to the nearest tarmac and receive a better night’s rest. That is no lie. And while I really found the highlight of that day to be my combined wine consumption and TV education (history was my major when I entered college…), lunch/dinner came in at a close second. Maybe it was because I am so obsessed with apples at the moment or maybe it was because I was generally starving or… maaaaaybe because it was the only substantial food that I ingested throughout the day (unless cookies count)… but it was good. During one of our lunches last week in Sonoma, we were served this incredible quinoa salad with some sort of citrus vinaigrette. It was so delicious that I instantly inhaled it and have been craving more ever since. Saturday seemed the perfect day to attempt a throw-together quinoa bowl given that it was only one week prior that I was sitting on top of a terrace looking at thousands of acres of vineyards… which you know, is basically comparable to sitting inside my house while the rain pours down outside, unshowered, undressed, and freezing because I refuse to turn on the heat yet.

At least I got the wine part right.

Couple all of that with the honeycrisp apples I found tumbling down the produce shelves in recent days, and I am in heaven. This time of year, I actually wake up in the morning craving juicy apples. It might just mean I’m dehydrated from all of that wine, but whatever… they are freaking delicious. And so was this. [/donotprint] Cook quinoa according to directions, then toss with tomatoes, red pepper, apple, pear, pom seeds, onion, cilantro, salt and pepper. In a bowl, layer about 1/2 cup of spring greens then top with another 1/2 cup of quinoa. Finish by drizzling vinaigrette over top.

In a bowl, whisk vinegar, lemon juice and zest, mustard, salt and pepper together. Stream in olive oil while constantly mixing until dressing has emulsified and thickened. Drizzle on quinoa. 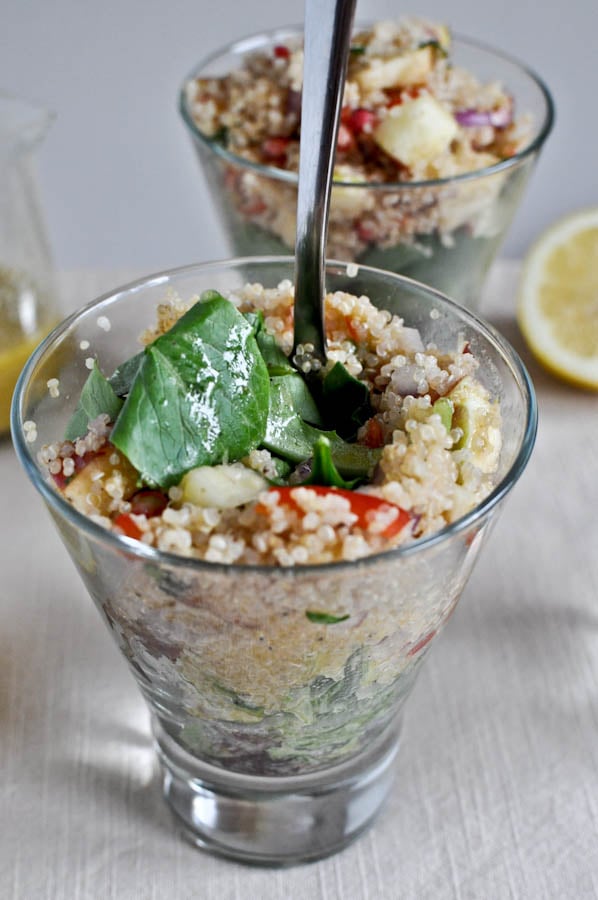