The best thing ever happened on Friday night. Some of you have asked how I dip my truffles since they appear all nice and smooth and stuff. I use forks. No biggie. Pretty sure this happened by accident about 5 years ago when I ran out of spoons. And yes, that would be me – the person who had a dish of brownies shatter in her oven – placing a glass bowl over a pot of boiling water. Sometimes I do stupid + desperate things.

You can see I’m not messy either. AT ALL.

Oh, and seriously? Most of my balls look like this. Not pretty. A nice, little hawt mess. We were at a little holiday gathering. After a few adult beverages we were ready to eat (i.e. like ravenous) and started to load up our plates with breads and cheeses and roasted red peppers and beef and this amazing penne. You may recall that there are really only two foods that my husband seriously dislikes. The first being coconut – he just can’t take the texture. He loves the taste and can slam a handle of Malibu like he’s 22 years old, but refuses to put the actual shreds in his mouth because they make his skin crawl. And the second is ricotta cheese – which I chalk up to him having some really crummy lasagna at some point in his life where the cheese resembled grit. But what do I know? Just a guess.

My cousin Lacy and I sat on the floor with our plates on a mini table and ate like hogs while Mr. How Sweet stood against the wall, attempting to devour his own plate as another party goer commented, “uh, who are you? You have red hair and don’t look like anyone here so I’m trying to figure out why you’re at this party.”

A few minutes later Lacy turns to me and says, “do you think this is ricotta in the penne?” To which I respond, “I’m pretty sure it is, it’s soooo good.” And she goes with a smirk, “well your husband is standing over there scarfing it.”

And scarfing it HE WAS. His second plate of it too. I was dyyyyying inside with giddiness. I love when he thinks he hates something and then eats like five platefuls. I don’t know where I disappeared to but when I returned, Lacy had filled him in on what he just ate and he couldn’t even take it. She was just as excited to break it to him too. Full on tantrum ensued. He refused to believe it. He insisted it was parmesan. Insisted it was feta. As the nice wife I am, I went on a mission to figure out how this penne was made and sure enough… it was penne with garlic and olive oil, topped with GIANT ICE CREAM SCOOPS FULL of ricotta. Yeah. That’s a lot of ricotta my friends. A lot of ricotta that he ate.

Since ricotta and I had easily one-upped him, I was aching to go 2 for 2. I made these truffles while he was at work (they are INSANELY easy, trust me), then strategically placed the pan in the fridge where he simply couldn’t miss them. Sure enough… he ate one.

Now the only problem is that I might be getting a divorce. 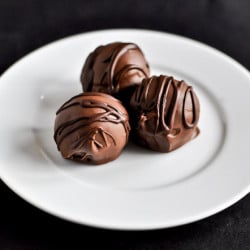 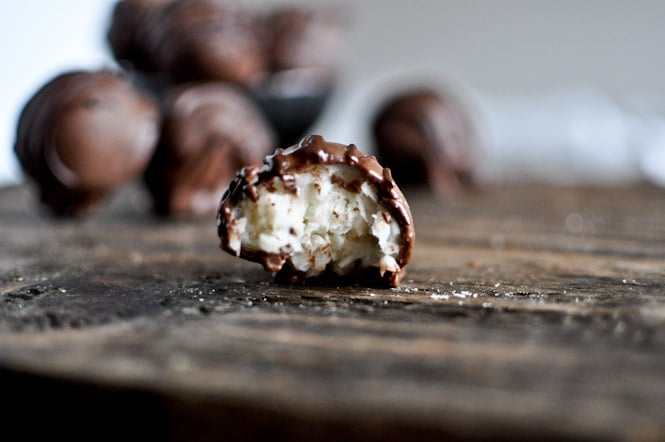 Moral of the store: make these tonight. They are so gooey and chewy I could die!