Ummm… but not really.

As I was testing out multiple crusts for the garlic bread pizza crust, I made like, fifty additional pizza flavors.

I did make this one. It’s like freaking SPINACH ARTICHOKE DIP on fat, fluffy bread.

Am I even serious right now? I almost crushed some pita chips on top just because. AND I thought I could trick my husband, who you know… loathes three foods in this entire world, one of them being ricotta cheese… into eating this pizza, but he walked in on me mid-ricotta tryst and saw two big heaps sitting in a bowl. So I told him it was ice cream.

He didn’t buy it. But he was also dipping a plain chicken breast in ketchup at the time and drinking a peach milkshake from a swirly straw. Whatever that means. Not only can you eat this pizza for, say… dinner or lunch, it makes for an awesome appetizer or pre-dinner snack. On a small roundish or rectangle-like crust, the filling sits almost an inch thick. Cheesy, gooey amazingness filled with – say it with me! – VEGETABLES.

I’m going to eat this forever. Drain artichokes and press with a paper towel to reduce some of the moisture. Roughly chop, pressing with a towel again, then place in a bowl. Add ricotta cheese.

Heat a large skillet over medium low heat and add 1 teaspoon olive oil. Add in shallots with a pinch of salt and cook until soft and translucent, about 5 minutes. Add in garlic and spinach, tossing to coat and cooking until spinach is wilted. Transfer spinach mixture to the bowl with artichokes and ricotta, then add salt, pepper, 1/4 cup parmesan and 1/2 cup mozzarella cheese. Stir to combine.

Drizzle pizza dough with 1 teaspoon olive oil and brush to coat. Sprinkle a bit of mozzarella cheese over top of the dough, then spread spinach ricotta mixture evenly over top. Cover with remaining parmesan and mozzarella cheeses. Bake for 25-30 minutes, or until cheese is golden and bubbly. 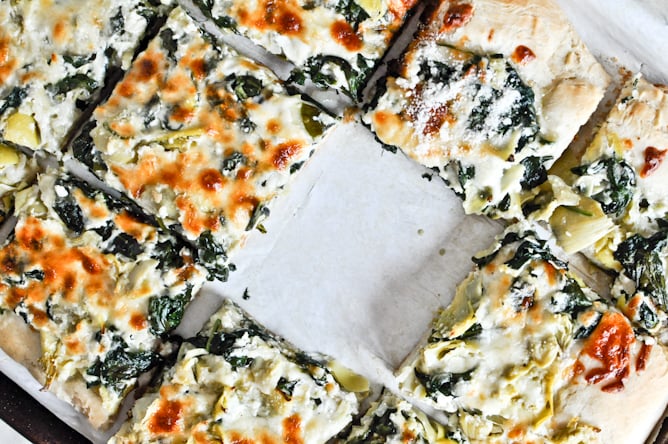 Somebody gimme a chip.