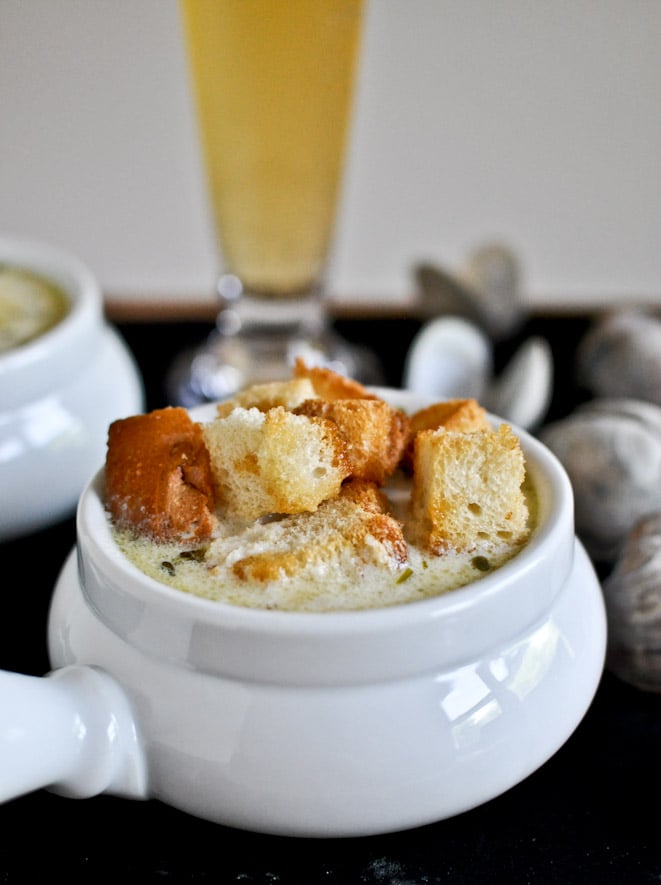 And then I forced my husband to eat it. On the HOTTEST DAY OF THE YEAR. 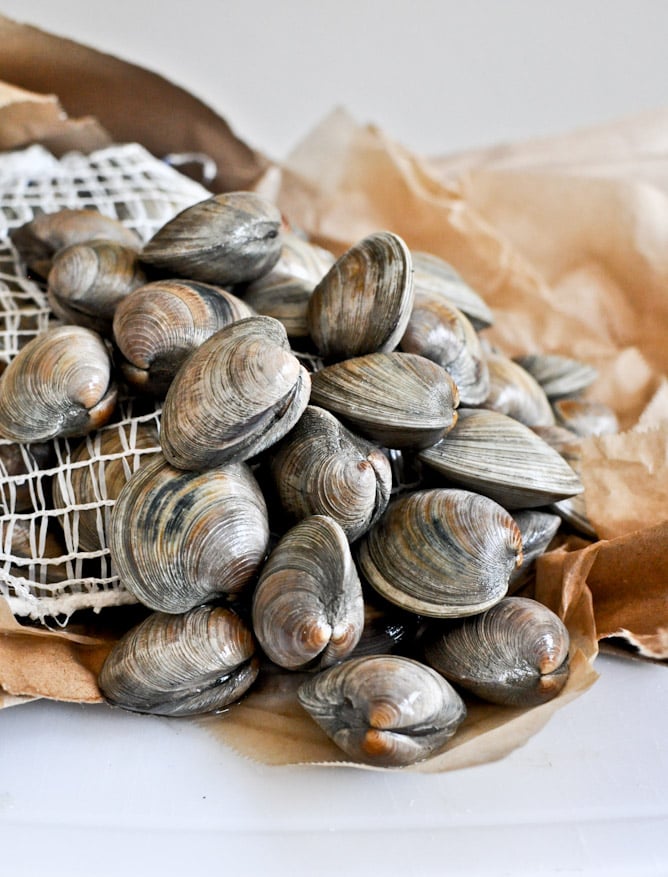 Reaching 100 degrees in the Pittsburgh area is rare, but you can bet that I celebrated by having my gas stovetop on for about four hours last Friday. Would you expect anything less? Probably not.

I gotta give m husband a shout out too though. The soup was THISCLOSE to not happening. I have wanted to make fresh clam chowder for over two years now, and on the day I chose to do so, the day I planned so carefully, just sure that one of the four grocery stores I’d go to would absolutely have fresh clams… none of them did. I.was.heartbroken. 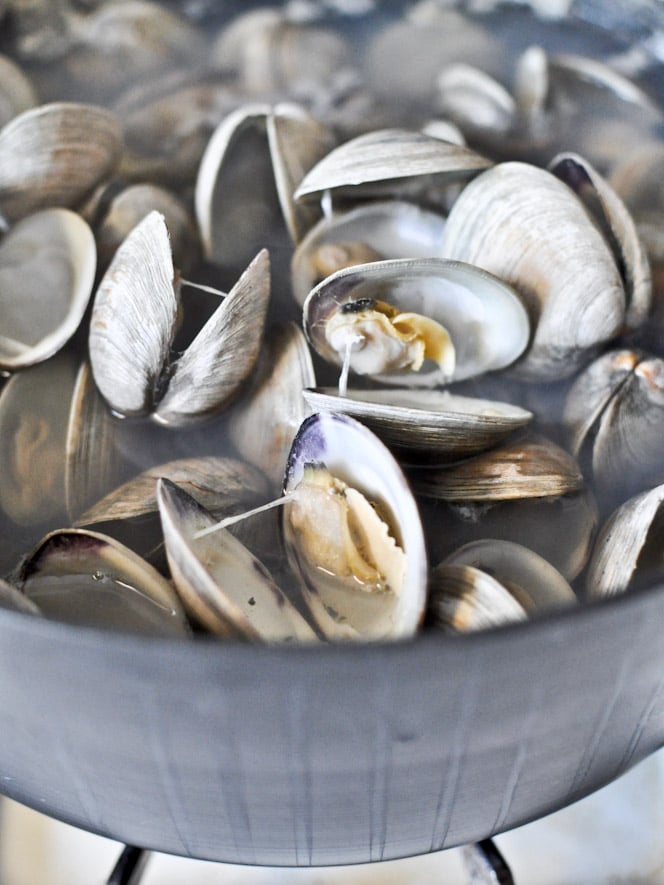 I bought eight cans of clams and six VERY expensive cans of clam stock just in case, then in a panic contacted everyone I knew asking if they’d be in the downtown area and could they pretty please stop and find me some clams and bring them to my doorstep immediately puuhhhhlease?!?! But no dice. Everyone has lives. Who would’ve thought? Luckily clam chowder just happens to be my husband’s favorite soup, and since he was on his was home from the airport after a week away, he quickly spun a u-turn and saved my life with a bulging brown paper bag filled to the brim with little neckclams on ice.

Myocardial infarction was practically my middle name. It was like Christmas!

And here’s the thing.

We’ve basically been ships passing in the night since the beginning of June, with him gone almost each week and myself traveling across the country three times in four weeks… but seriously this situation works rather nicely for us. Not that I’ve kept that a secret at all… hello having a big fluffy bed all to myself. It almost makes me want to be a single old spinster for all of eternity. But yeah. He’s a bachelor for life stuck in a married man’s body and I’m a psychotic nutcase that thrives on being alone so I can get all wacky up inside my head and overanalyze my entire life. Trust me… It works. I like to call myself a tortured artist even then I possess no artistry whatsoever and hope that one day I will have some great works come out of my torturedness. Which basically consists of a heck of a lot of anxiety over three or four any given premium cable fictional relationships. Depends on the season, you know. 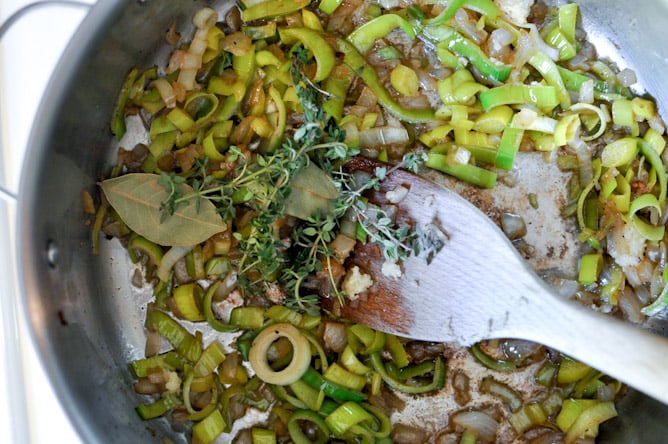 So I thought… what better way to welcome him home on Friday than with clam chowder!? Yeah yeah – don’t answer that.

I wanted to make him something since I was leaving a mere 36 hours later, and because I rarely think before I act (or uh, speak) the plans (minus the clams) were ready to go, nearly all the ingredients were bought and that chowder was happening in my kitchen no.matter.what. And to top the whole thing off? Croutons. Not just any croutons. Golden cubes of toasty bread doused in a brown butter drizzle.

Oh! Speaking of croutons, last night as we were driving home from the airport, I turned to him and asked what he had been eating since I’d been away. His response? SALAD. Salad? For real? What what? I asked what was on his salad and he tells me “lettuce… tomatoes… croutons… hard-boiled eggs…”

Croutons? Did you make your own croutons? I questioned him.

But no. He BOUGHT boxed croutons. And this is the part where I tell you how I am a crouton snob. And how could he possible BUY gross, stale, chemically-laden croutons two days after I made brown butter garlic croutons?! Ugh. The answer still alludes me. 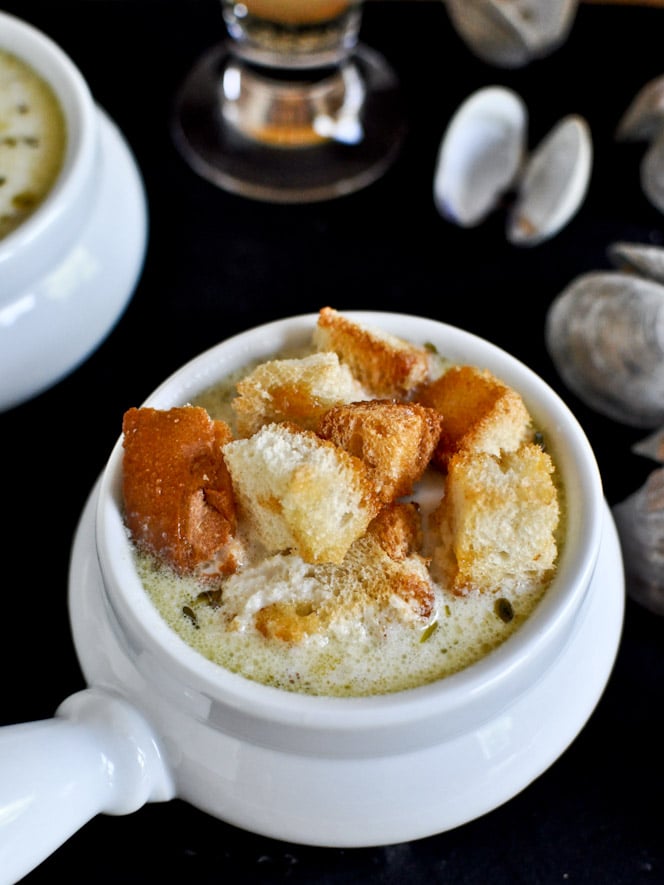 Long story short is that a new summer tradition is going to be fresh clam chowder happening in my kitchen. This version is creamy but light – it doesn’t resemble the thick and heavy chowders that most restaurants serve, but it still melts in your mouth and is satisfying while tasting like sunshine and beaches and ocean waves. Without all the sand in your mouth.

Chopped potatoes plus a bit of crispy bacon and fresh herbs and a heavy-handed glug of cream just may be the answer to all of life’s problems. Add 10 cups of water to a large stock pot and let come to a boil. Once boiling, add clams, cover and let cook for 5 more minutes. Stir, then let cook, covered, for 5-10 minutes more. Remove clams (which should be open) with a slotted spoon and place in a large bowl or colander. Drain water through a very fine strainer a few times (I drained and re-drained 3 times to get rid of the sediment and sand) and reserve 6 cups of broth. Set aside. Takes clams out of shells and discard shell. Coarsely chop clams and set aside.

Heat another (or the same one, cleaned) large pot over medium high heat and add bacon. Cook until crispy and fat is rendered, then remove with a slotted spoon and place bacon on a paper towel to drain. Reduce heat on the pot to low, add butter, then add in onions and leeks with 1/2 teaspoon salt. Stir to coat, then cook for 5 minutes until softened. Add in garlic, thyme and bay leaves, stirring and cooking for another 5 minutes. Increase heat a bit and whisk in flour, stirring for 1-2 minutes to create somewhat of a roux with the vegetables.

Add in potatoes, clams, bacon and reserved clam broth. Bring to a boil, then cover and reduce to a simmer, cooking for 30 minutes. Turn off heat, stir in heavy cream, salt and pepper. Taste and season additionally if desired. Let sit aside while making the croutons, then serve hot with croutons for topping!

Note: you can definitely used canned chopped clams (I’d probably use 4 cans) and water or fish/clam/seafood stock to replace the liquid.

Preheat oven to 375 degrees F. Place bread cubes on a baking sheet. Baking for 10-12 minutes, tossing every 3 minutes until cubes are evenly golden.

While bread is toasting, heat butter in a small saucepan over medium heat. Whisk constantly until small brown bits appear on the bottom, about 5-6 minutes. Remove and whisk for another 15 seconds, then toss in pressed garlic and whisk for 1 minute. Let sit until bread is done.

Once bread is toasted, pouring garlic brown butter over croutons and toss quickly. Serve on top of hot bowls of clam chowder! The croutons are basically a meal too. Or so I say.