by Jessica July 9, 2012
This is the kind of meal that makes me want to straight up faceplant into my dinner. 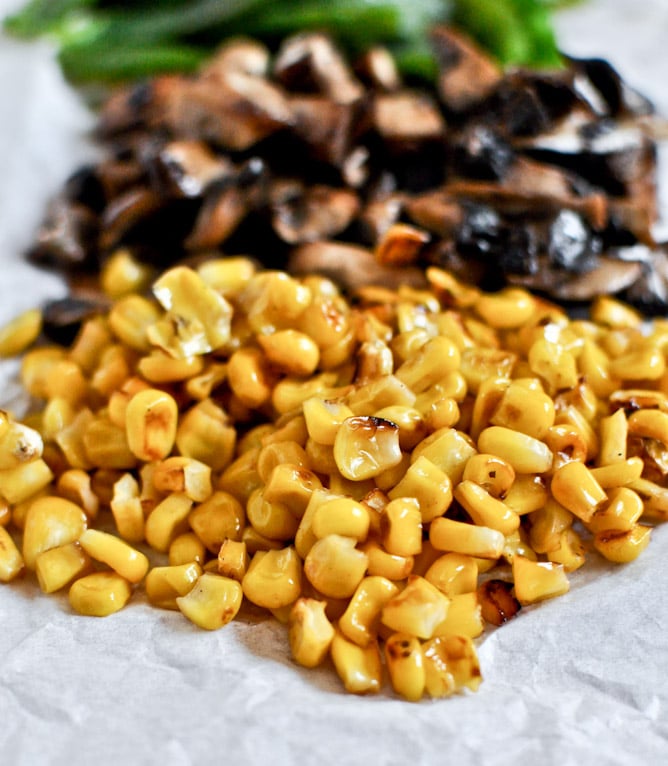 AND! Not only that, but I finally got my husband on the Mexican-food train. I picked him up at the station and banned him from ever stepping off that ride again.

These don’t count, because he won’t eat them for dinner since they don’t have chicken, steak, chicken, fish or chicken, buuuuut he would eat them as a side dish. I’m not even lying. Oh he also tried to tell me about these delicious tacos he had while traveling that were topped with chipotle mayo. Um, mayo? I screamed in his face. No one would put MAYO on a taco!

Clearly you now have an idea about how conversations go in this house. And how… easy… I am to get along with. Cough Cough. 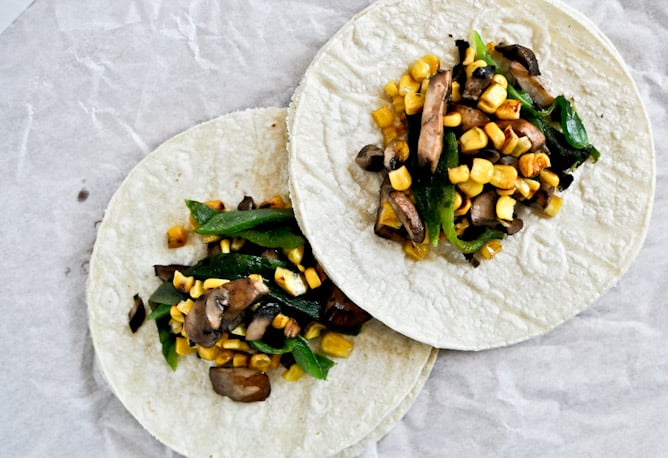 He swore it was mayo though. I swore on my teddy bear that it could seriously NOT have been mayo, and that it had to be sour cream, and hahahaha! – he “hates” sour cream and he ate it anyway! I win! I swore on my freaking teddy bear after all.

But no. He found a link to the place online that clearly said mayo. WHAT. Whomp whomp.

I’m not about to put mayo on my tacos any time soon, but I’m pretty cool with putting just about everything else on there. Like… EVERYTHING ELSE. So this taco was inspired by a recent trip to California with Thermador and my new favorite local taco place here in Pittsburgh. It’s sort of a fusion of both meals I recently ate, and it’s the newest way that I am forcing myself to eat vegetables. Because when vegetables are sauteed in butter, stuffed inside warm corn tortillas (yellow FTW), topped with cold avocado, grated cheese and a crema of choice… it’s like… you’re not even eating vegetables. They don’t even exist. Because it’s just a TACO.  No vegetables allowed. 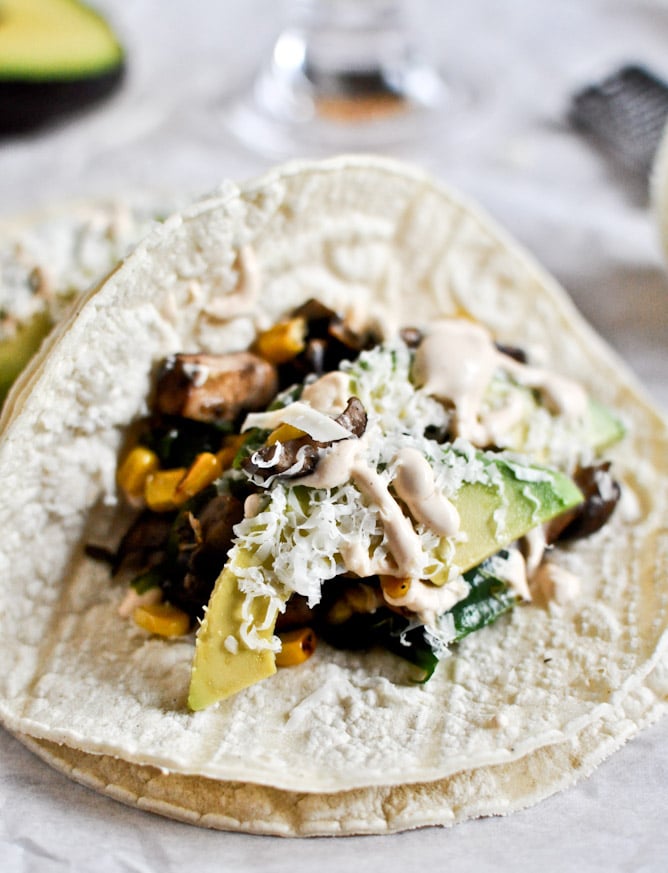 5 large ears of sweet corn, grilled and cut off the cob

To roast peppers: remove core and seeds from peppers and slice into pieces. Lay on a baking sheet and preheat the broiler in your oven. Place under the broiler skin-side up until skins are completely charred and black – this took about 10 minutes for me but will depend on your oven. Just check every 2 minutes or so. Immediately remove peppers from oven and using kitchen tongs, quickly place them in a ziplock bag then seal it. Set aside for 20-30 minutes.

While peppers are “steaming” in the bag, heat a large skillet over medium low heat and add butter and olive oil. Toss in mushrooms, stirring to coat, then cover and let cook for 10-15 minutes, stirring occasionally. Remove from heat, season with salt and pepper and set side.

1 tablespoon adobo sauce (from a can of chipotles in adobo)

juice of half a lime

Combine all ingredients in a blender or food processor and blend until smooth. Emeril recommends letting his sit over night to develop culture but uh… I didn’t do that. It’s delicious this way too! I knew I liked you.