You know that episode of Sex and the City where Berger breaks up with Carrie on a post-it? 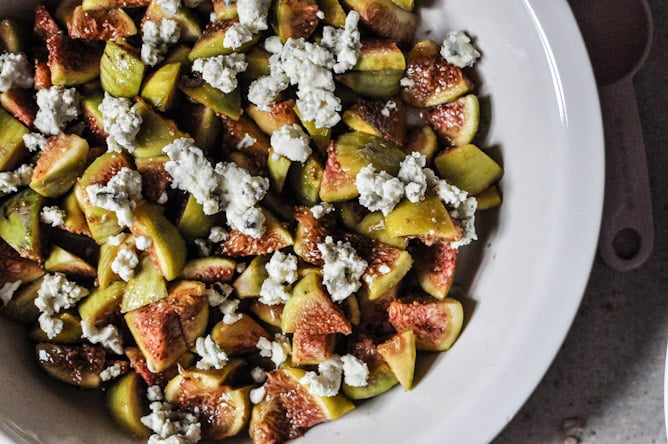 Well, I sorta figure that you’re gonna give me one of those today. Like you want to slap one right on my forehead. Because if you haven’t noticed, I put CHEESE IN YOUR DESSERT. More specifically, blue cheese… which like more than half of the population despises. Or something like that. I have no idea and I just made that number up and I’m terrible at math soooo… if you’re one of them, I think you could add another cheese like goat or feta or something fabulous. Luckily I’m not a part of the blue cheese hating group. And I also lovelovelove figs. Were talking… major love here. But I live in Pittsburgh… and I might get um, five good fresh figs a year? And that’s a stretch. So what am I to do when I get fresh figs? Coat them in sugar and cover them in cheese and crisp and bake until bubbly and warm and delicious. And then just eat spoonful after spoonful after spoonful. How do we feel about this? Can we get behind it? Can we get over you’re concern of me being the girl who constantly references Sex and the City, to which I would say your concern is spot on? I think we can. Post-it and all. If you think this is crazy, yesterday I ate a smoked blue cheese chocolate truffle. Best day of my life.

« Previous PostChocolate Chip Blueberry Breakfast Quinoa.
Next Post » What I Did All Week.