Oh my gosh. I’ve been waiting forever to tell you about this pizza. And by forever, I mean three days. But in Jessica years? That is forever.

The toppings? I’m over the moon. I don’t need to remind you how weird it is that I love brussels sprouts because well, I do that every single time I talk about brussels sprouts and isn’t getting old? Yes and yes. I know. And over half of my recipes with these darn brussels contain bacon, so throwing the whole combo on a pizza was second nature and wow… thank goodness it was. Brussels, bacon and cheese. Just go with it.

Also go with a little balsamic glaze if you want. Trust me. I’m no pizza connoisseur – unless eating obnoxious amounts qualifies one as an expert – but this somewhat resembles a wood fire crust or something. I dunno. I might be making that up but it’s what it reminds me of. I used my go-to dough recipe, which is from our favorite garlic bread pizza crust. Since making that nearly one year ago, I’ve never made another dough recipe. Which is huge, considering I try out doughs like they’re going out of style. Back in December, I had to take a little trip to NYC and conned my friend Bev into coming with me. No really, I pretty much verbally harassed her into coming. It was amazing. As we walked the streets of NYC, she told me about how she had made this incredible pizza in a cast iron skillet and how I had to try it. She also watched me emotionally break down when we didn’t make it to Crumbs before leaving for the airport and she essentially saved my life when I tried to jaywalk a few times, but those are stories for another day.

Oh! And coincidentally we ate slices of pizza around midnight after already eating a full dinner earlier, but we walked about five miles in between so that more than made up for it. Yeah, we should have had two slices. We inhaled negative calories. Oh. Sidebar. You can make “normal” pizza too. I bet you can’t guess who requested normal pizza. I instagrammed this pizza and said something inappropriate. I swore up and down and right and left that I was making the pizza as soon as I got home. Then I came home and promptly forgot about the pizza because, hello, it was the holidays and I decided to start shopping ten days before. But! Last week I remember and… my world was forever changed.

A slight note: um, this method works really well with two people. Additionally, this method pretty much requires a pizza peel. Guess what? I was one person without a pizza peel. In other words, I nearly died while trying to make this pizza. (Note my makeshift “peel” up above, aka a flipped over, floured baking sheet.) I would have been okay with that though because IT’S THAT GOOD. And you know I’ve been trying to reel in the drama recently so if I’m saying it’s that good… it’s that good.

I love it. Big heart. 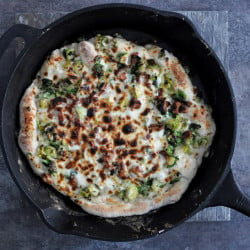 Yield: 1 pizza (dough makes enough for 2 - you can freeze one!)
Print Recipe Pin Recipe
5 from 1 vote
Leave a Review »

pizza. [NOTE: these ingredients are for ONE pizza]

Oh who am I kidding? Drama queen for life.