Can Mondays be decadent? Because I think this one is.

It’s like velveeta shells and cheese on drugs. In a good way. And ten thousand times better.

Speaking of, those darn boxed shells are one of my guilty pleasures. I haven’t had them in years because I constantly feel forced to grab the organic whole wheat version from Trader Joe’s which tastes NOTHING like the old-school ones, but still. I kinda want some 1995 squeezy-cheese pack pasta in my life. Not today though. Not today. We are making something a leeeetle more extravagant. But still easy. With lots of flavor pop.

Last summer I made a stovetop BBQ chicken mac and cheese and went nutso for it. In a sense, this recipe is a giant copout considering it’s not entirely different but it’s just so, so good. I’ve been wanting to create a buffalo version for at least a year and in my current buffalo infatuation, I’ve found my perfect combination of flavors for all things buffalo. So. This buffalo chicken mac isn’t TOO different from the baked version I shared a few years ago, but I personally find it a little simpler and ummm… you don’t have to turn on your oven in the 500 degree heat of summer!

At least I don’t exaggerate things at all. 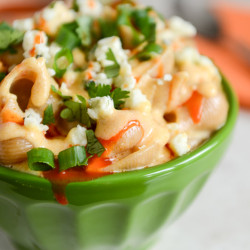