I seriously don’t even know what to say. You know how sometimes I make a dessert and freak the heck out over it and deem it the best thing I’ve ever made?

Yeah. This is one of those.

I don’t think it’s a secret that I’m a spaz over all things s’mores. I have no idea why I love s’mores so obnoxiously much but I just DO. I LOVE THEM. Maybe it’s because they were such a special treat when I was a kid and they invoke all sorts of fun memories including bonfires and lightening bugs.

Oh, and what do you say? Fireflies? Lightening bugs? I’m certain I ask you this question every summer, but you know… I’m clueless. I don’t remember what the majority voted upon. I say lightening bugs. I’ve said lightening bugs my entire life. BUT. I want to say fireflies. Fireflies just sounds so… pretty. And romantic. And summery. And, like, enchanting warm evenings. I want to be cool and say fireflies but if I say fireflies to anyone within about thirty miles of me, they’ll be all WHAT? These are my firefly dessert. 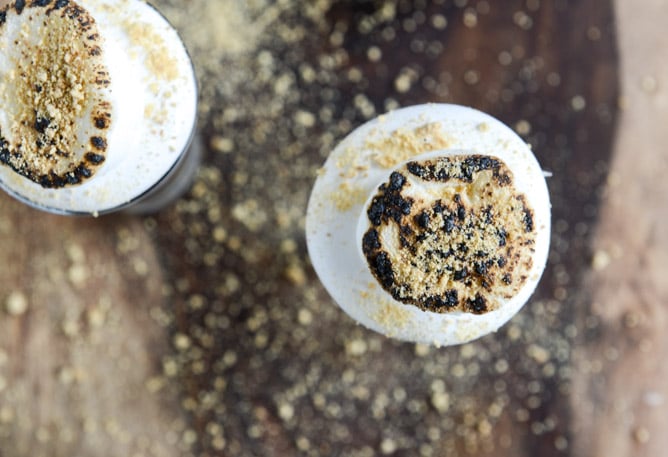 You know I love me some no-bake cheesecake, especially in little cups or jars. Mainly because I’m lazy. Also because it’s so easy. I don’t have to worry about my cheesecake cracking or some garbage like that. Cheesecakes can be so high maintenance, and I can totally say that because they are my all-time favorite dessert. Sure, things have been a little decadent around these parts lately but I’m just like… ah. I finished a book full of 150 pretty healthy recipes and I just neeeeeed to get this delicious stuff out.

So this is what’s going on.

We have a graham cracker crust. Obviously.

This darn marshmallow cheesecake, which makes me want to die. It’s… stupendous.

Fluffy marshmallow cream on top. From a jar. Judge not.

And a toasty little marshmallow on top. Like a freaking cloud. 116 Comments on “No Bake S’mores Cheesecakes.”