Let’s eat some comfort in a bowl! I’ve been overdoing it on the exclamation points lately.

While I’m pretty sure they wore out their welcome in my life around the age of twelve, I found some “stories” that I wore back at that age and oh my gosh – the exclamation marks jump off the page. It sort of went something like “Amanda and Kate walked to the stream behind their house! They found two giant rocks to sit on and Kate started french braiding Amanda’s hair!” Seriously.

I wonder if my fiction characters from twenty years ago would enjoy some chowder. ??? Are we going to have to write pinterest into story lines now? A little over two years ago I made a corn chowder with BBQ shrimp that my mom had found in our local newspaper. The flavors were utterly awesome and while I’ve only recreated that soup twice since, every time I take a bite I’m like whyyyy am I not making this every single week? It’s infused with red peppers and potatoes and is a big old bowl full of zest.

The thing was, I wanted to try a slightly creamier, rich version of corn chowder that really focused on the… corn. Duh. The first version I made allowed the shrimp and sauce to shine, and with my obnoxious and intense dependence on fresh, sweet corn this year, I deemed it appropriate that I finish off the season with a more corn-centric recipe. [In case you’re wondering, I also overdo it on the hyphens.] There isn’t any potato, celery, carrot or anything like that in this soup either.

Plus, the bacon and gorgonzola are simple add ins at the end, so you can swap the blue for goat cheese or forget about the bacon entirely. Which is heartbreaking, but still. I get it. Do you. 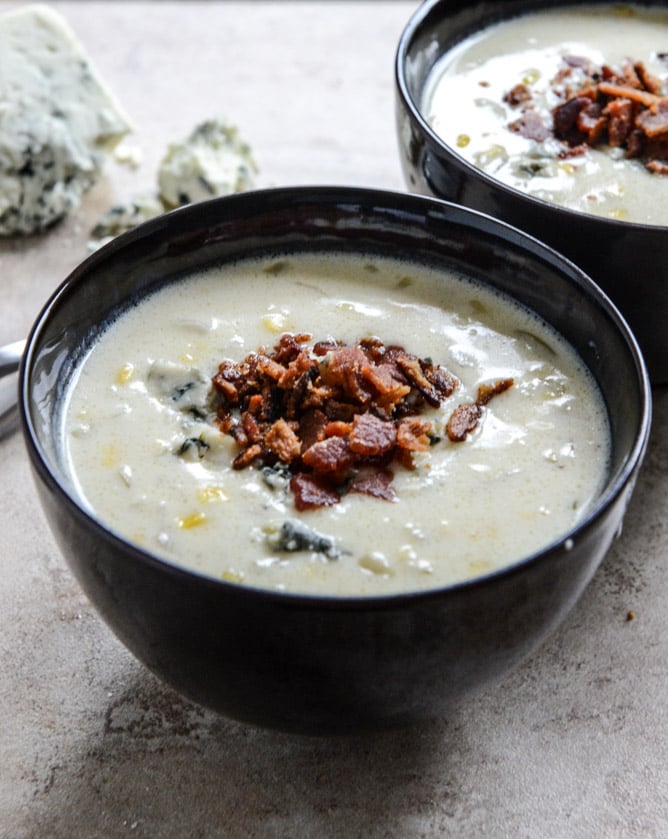 Speaking of bacon, my last two days have been a bit… bacon infused. I got to spend some time at my favorite local marketplace and holy cow – their bacon. I mean, I knew their bacon was delicious because we’ve bought it there for years. But it was actually prepared there for breakfast two days in a row and I was just… gah. Dying. The first day it was served with raspberry mascarpone stuffed french toast. Yeah. Like multiple obsessions in on meal. Yesterday morning when I drove over and was greeted by another giant place of crispy bacon – so freaking crispy that it seriously melts in your mouth with every bite – I actually wondered out loud if I could continue to eat breakfast every morning without a few slices of bacon. I think I could live on a few slices of that bacon alone until lunch. It’s protein.

I could eat vegetables for my next meal. [Wishful thinking.]

This is one of the first years that I can honestly say I enjoyed every last drop of summer. Besides a few pumpkin iced coffees [yeah, I still hate myself], I have survived on the local produce that is on it’s way out and have just been living in this moment. It’s weird, since most of my life is lived on nostalgia and rereading faux novels I attempted to write in 1992. Maybe I’m growing up.