A big birthday day that is. Someone in this house has a birthday today and it’s not me. And it’s a BIG birthday. A really big one.

Two weeks ago I asked him what kind of dessert he wanted for his birthday. Well, scratch that. Two weeks ago I said, if you could have any dessert in the world, what would it be? Like what is your all-time favorite dessert on the planet?

He looked at me like I was nuts. Apparently not everyone loses their mind over food.

So I was like… okay, forget that. I’m just trying to make something for your birthday (well, your FAKE birthday, like your blog birthday, since I have to make the recipe ahead of time to post ON your birthday, such is life) and wanted to know what your favorite dessert in the universe was?

Perhaps I should know this after five years of marriage. And I actually do know it. But I’m such a scatter-brain, lack-of-decision-making-and-constantly-wanting-the-new-favorite-thing woman that I was hoping for a new answer. He replied with, well I like chocolate chip cookies. Duh. That is no secret. Didn’t he want something a little more, say, indulgent on his birthday? His BIG birthday? My prayers were answered. Next came… but I also really like cheesecake. [Which is a new feat in itself, but that’s another story for another day.]

And all I thought of was… chocolate chip cookie cheesecake. YES.

I knew it couldn’t be real cheesecake though, because who has time (I definitely do but like to pretend that I don’t) to do all that water bathing and cheesecake cracking stuff? Plus, I love eating little things out of jars and I knew he’d really want the actual chocolate chip cookies IN his cheesecake. I though they’d taste best if they still had a bit of crunch and were literally just – crushed – into the cheesecake. 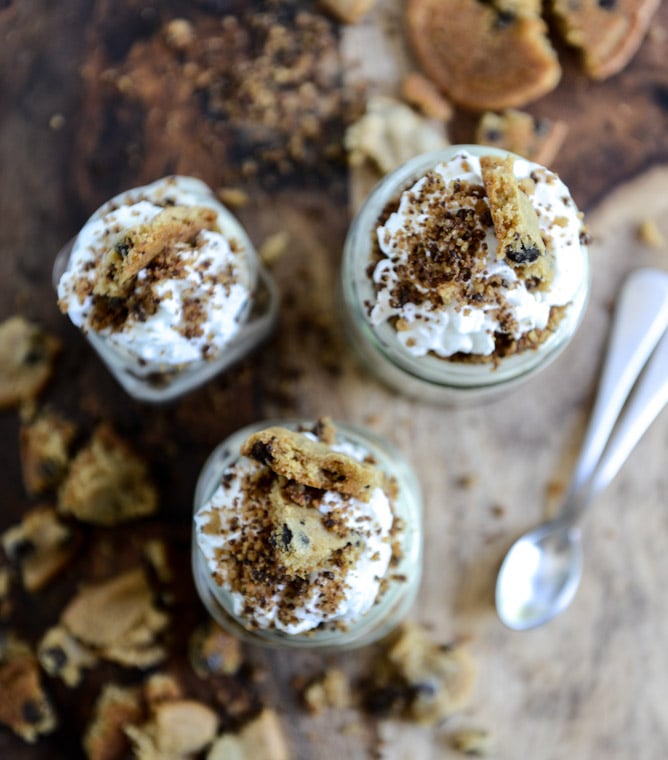 This is a ridiculously easy (and borderline embarrassing) recipe in which you just whip up some no-bake cheesecake and crumble up chocolate chip cookies. It’s up to you if you want to bake your own or buy them or convince somebody to make you a batch. The little cookies are a makeshift graham-like crust, but with bigger pieces, more texture and lots of flavor.

The parfaits are, in a nutshell, super fun to eat.

I asked the birthday boy what he’s learned in forty years and while it took him a while to think about it, one of his responses was, I don’t need to have meat with every meal when that meal includes brown butter.

I think that sounds about right. HAPPY BDAY EDDIE! 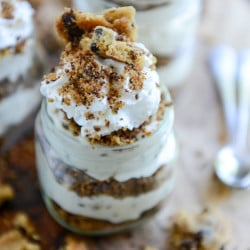 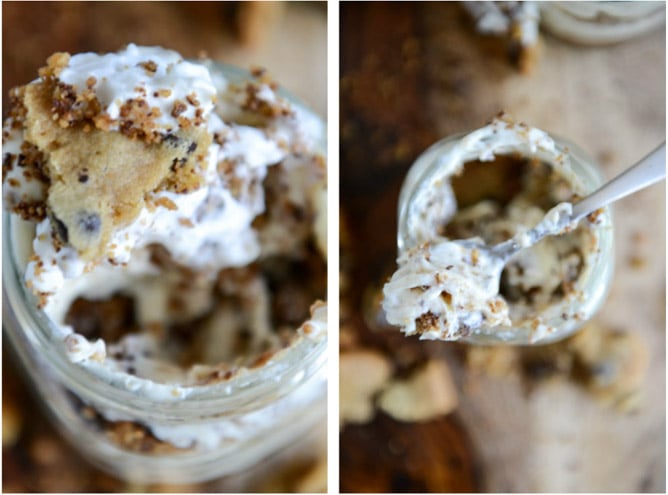 Oh and P.S. last night we sat on the couch wearing face masks… to prepare for birthday festivities I guess? Yes, I said we. What is this life?