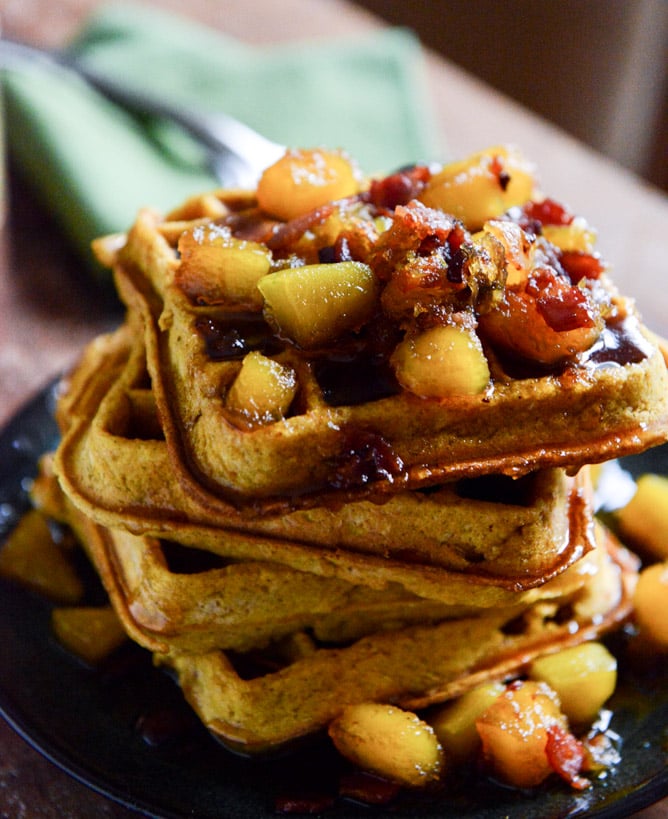 I am dying to tell you about these waffles. They are pure insanity, in the best way ever. This is an autumn recipe if I’ve ever seen one and it just screams chilly weather and sweaters and cuddles by the fire. It’s all-encompassing for fall. Yeah. It’s fall. I just said autumn up there to try and be fancy.

So. I totally found this recipe at my mom’s house. She is the type of mom who still cuts out recipe newspaper clippings and hoards the entire food section of every piece of news that she reads. She still calls me and asks “did you see this in the paper today?” to which I have to remind her that no, I’m way too much of a millennial and don’t even get a newspaper. Which I hate. I want to get a newspaper but I’m afraid it will just got to waste and we will continue to read everything online. Anyhoo, this recipe was not in a newspaper, but was in the most recent version of the American Spoon catalog. If you’ve been here awhile you’ve heard me wax (un)poetic about how much we loooooove their products and how we’ve been buying them for years when we go to northern Michigan. My grandpa even sends me orders as gifts for Christmas and what not which is the best thing ever.

So this was one of those recipes that I saw and immediately needed to make. I mean, seriously – immediately. However, I couldn’t. I was leaving on a jet plane in less than twelve hours and unless I felt like gorging myself with a second dinner, it wasn’t happening. I was truly afraid I may forget about them. I didn’t. Actually, I couldn’t wait to get home and make a batch. I thought about them alllll weekend. And they were the first thing I made come Monday morning. The first pumpkin recipe that’s graced my kitchen (aside from another boozy shake which you’ll hear about later) this season… and definitely not the last.

What. How does this happen. On second thought, I decided that I’d keep the pumpkin spice waffles. The photo just looked so dang good and the flavor combination sounded pretty fab. I didn’t want to screw it up, even though I did end up leaving off the pepitas because I simply didn’t have any in my pantry.

Which is insane. I have EVERYTHING in my pantry. It’s like hoarders for food bloggers. It’s embarrassing and disgusting and wonderful and awful all at the same time. Yet, no pepitas. Shocking. (You can imagine what’s first on my grocery list.)

The waffles? GAH. So good. I adapted this waffle recipe from my friend Kristen – you whip the egg whites first and fold them into the waffle batter. They are super fluffy and just fantastic. Let me tell you something else about these waffles too. I ate them this past weekend while I was in Utah and on top, had a big dollop of a whipped yogurt topping and lots of berries. The whipped yogurt topping seriously blew my mind. It was greek yogurt folded into freshly whipped cream with a tiny bit of sugar. I’m thinking about adding bourbon to it.

But this isn’t about that, so I’ll stop. These waffles are so darn good, even if I did completely overfill my waffle maker and create a gigantic disaster the first go round. They are fluffy but a bit crisp on the outside and full of autumn flavor. The whole syrup idea still completely throws me for a loop because the flavor combination is explosive. I am the weird person that doesn’t really care for maple syrup on my pancakes and waffles but this is one big fat exception. Dude, this is like a real meal.

This is ten times better than breakfast. It’s definitely more like breakfast for dinner, or brunch with cocktails, or an eat-your-emotions marathon. The best part is that the waffle recipe is pretty healthy and your (pure) syrup has flipping vegetables in it. 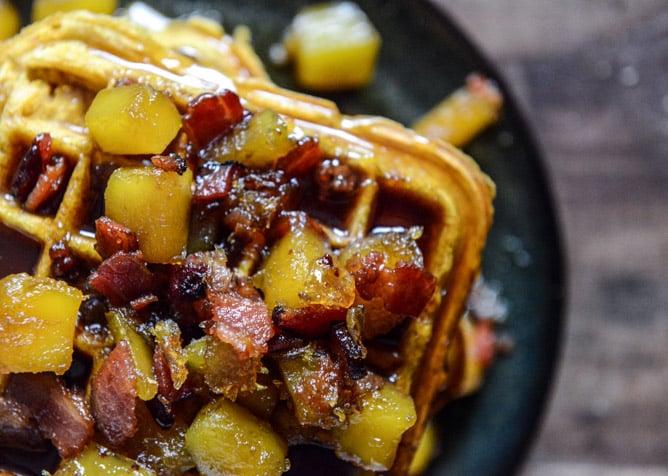