Exactly How My Mom Makes Her Awesome Gravy.

I’m trying to be timely! 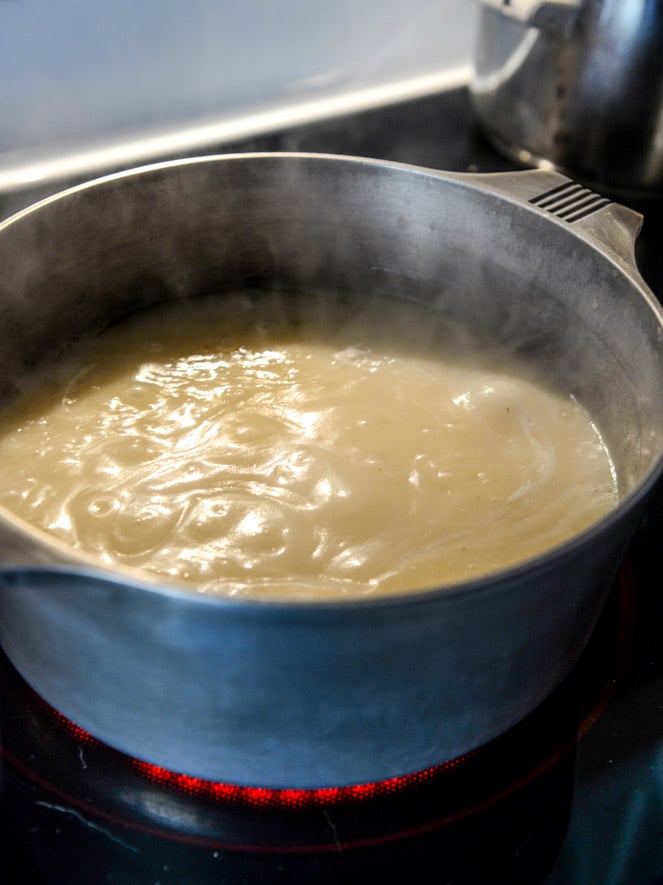 I’ve got to tell you that my mom is the gravy queen. She makes some of the best, non-lumpy gravy I’ve ever had in my life. And not only that, but she has made strong points about gravy since I was a kid, most notably sharing her favorite college snack of french fries and gravy. I think that is the first time I ever heard of food described as “sinful.”

One of her specialties is an old-school turkey or pot roast sandwich on white bread, literally SMOTHERED in gravy. Now that is some real comfort food.

This is exactly how she does it! This is a simple, basic method that is a little boring to see in photos but seriously WORKS. Here, she simply roasted a smaller turkey breast. But this is the exact same way she makes gravy for a whole turkey (the gravy usually ends up darker), chicken (the gravy looks similar to this), pot roast (the gravy is much dark, obviously since it’s beef) and so on. Her method is super simple and just requires a lot of stirring, some seasoning at the end and patience patience patience. This gravy also reheats very well – and she will make HUGE batches at a time for tons of leftovers. Depending on how many people she is feeding and how much gravy she wants, she often adds a bit of stock to the bottom of her roasting pan before cooking. This way she ends up with more gravy than what the drippings would provide, and the stock is flavored with the drippings during roast time. She says she adds about 1/4 inch of stock. It’s an eyeball thing! 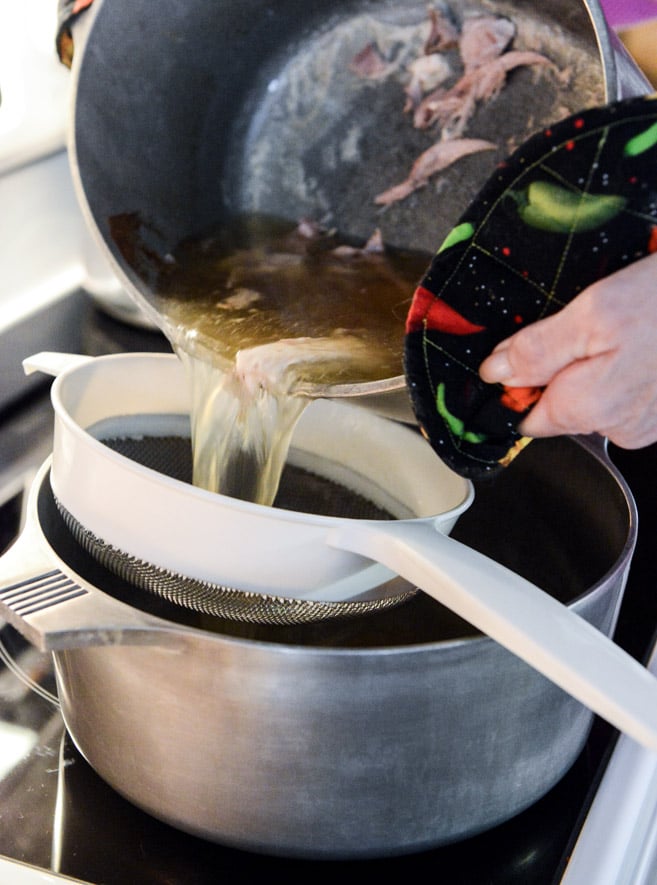 After removing the bird, she strains out any loose pieces of meat, pouring the drippings into a saucepan or pot. If she is roasting a large turkey on a roasting pan, she just might pick out any loose pieces with kitchen tongs. She likes to use the same pot or pan that she roasted the meat in, that way you get all the goodness of the brown bits on the bottom. It’s up to you whether you want to use a new pan or the original one.

After that, she begins to heat it over medium heat. After adding the flour to the water, she shakes the HECK out of it in that shaker bottle. We are talking for at least 30 seconds, but probably closer to a full minute. I have found that this is the best way to make a slurry and used this method a lot while developing some healthy yet creamy crockpot soups for my cookbook. Next up, she pours the slurry into the drippings that are in the pot over the heat. Then she begins to stir. And basically, NEVER STOPS. No really. My life has been threatened if I stop stirring.

I’m not sure if I can fully explain the extent to which my mom stirs and whisks her gravy. It takes a long time. There have been Thanksgivings when I feel like my arm is going to fall off. Someone is always stirring, so if you need your hands for something else, find other hands and make them stir. For real. 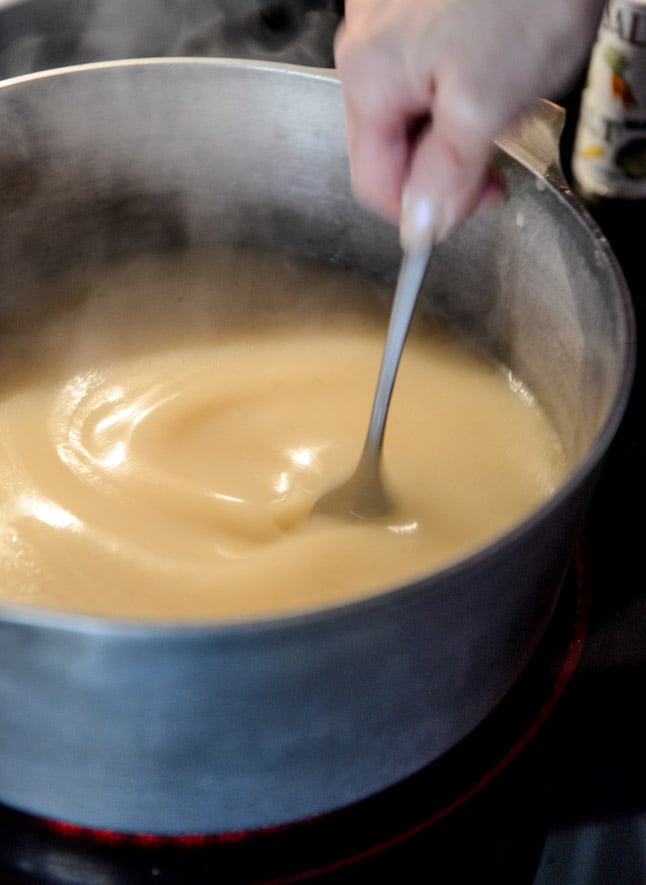 The gravy will begin to thicken and become, well… gravy. You will know when it’s at gravy status. You know?

It’s still over medium heat, but it’s boiling and bubbling away. After her 15 to 20 minutes of stirring, she sets it to low and that’s where it stays until it’s served.

Before serving, she tastes it and seasons the heck out of it. Don’t be afraid to season it – it will need a good bit of salt and pepper to taste like GRAVY. Just continue to taste and add. We do not measure, considering she likes a lot more salt than I do. Just taste and season. It will also depend on if you use stock, how much sodium that stock has, and so on. Lots of factors, but not difficult ones.

Oh and P.S. -> are you a gravy drizzler or a gravy smotherer? Like does your entire plate swim in gravy? Or just a few spoonfuls here and there? I’m a spoonful/drizzle girl. Shocking, I know. 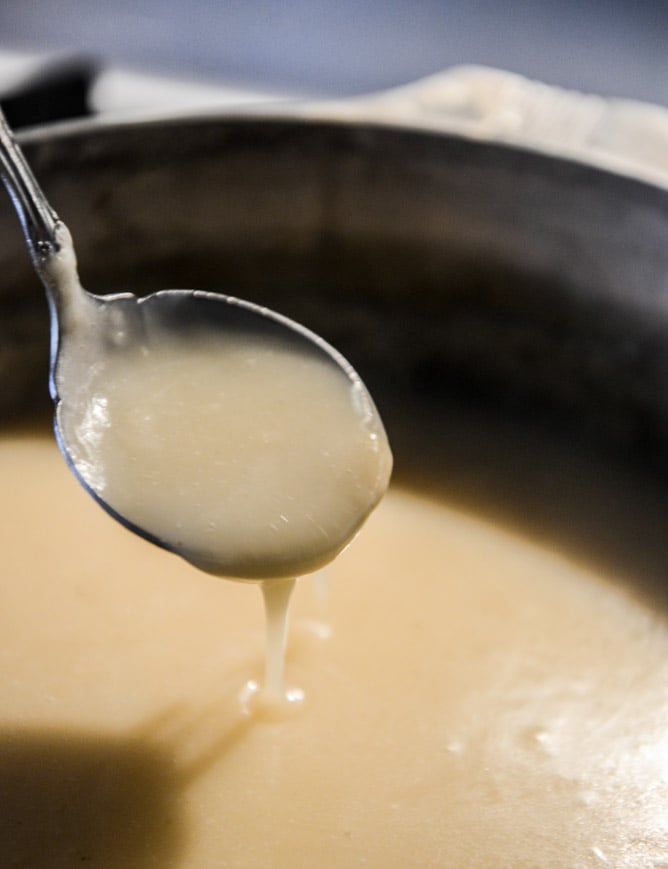 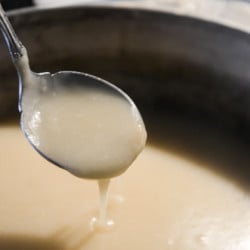 How To Make Gravy 115 Comments on “Exactly How My Mom Makes Her Awesome Gravy.”