For the last four years, my first post-Thanksgiving recipe has been an eggnog related breakfast dish. At first it was accidental but then I decided that I liked it. And it was tradition. And that I was doing it.

Until I can no longer think of things in which I can shove eggnog inside.

I’ve already made an eggnog breakfast crumble crunch cake and this eggnog chocolate chip bread. Which is totally a snack, because it’s bread. Definitely not a dessert. Just a snack. 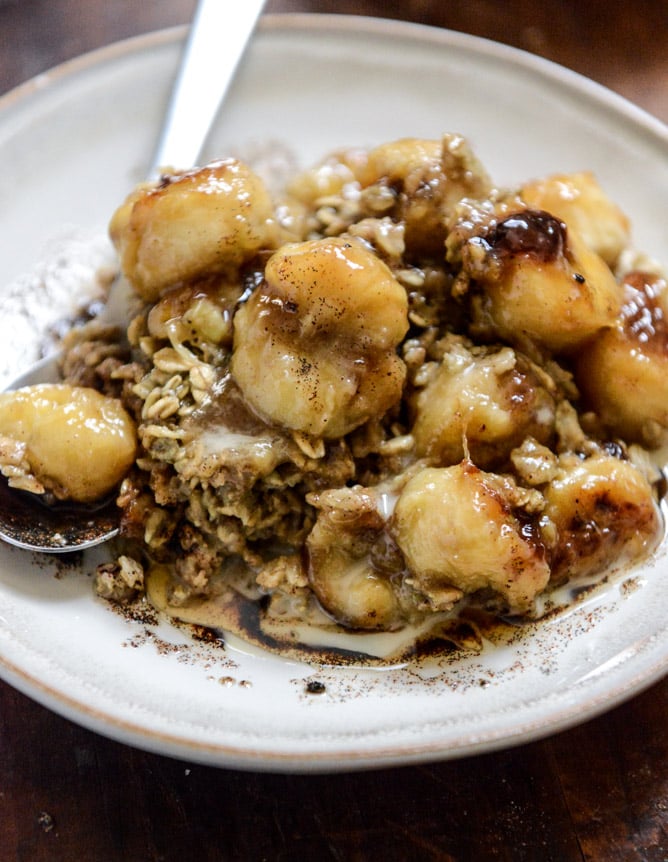 And now, oatmeal. In baked form because other than cookies, it’s really the only way I like to eat oatmeal. And it’s perfect, because this is one of the only ways I like to consume eggnog.

We talk about it every year, but I’m one of those few-sips-and-I’m-done eggnog people. It’s not deliberate it’s just… enough. BUT. I haven’t had spiked eggnog before. That might be a game changer. Also: how? Who am I? I should probably make spiked eggnog now. Is it too late? We shall see.

Since I can’t leave well enough alone, this baked oatmeal is topped with caramelized bananas and a fat drizzle of brown butter. Not just any brown butter, of course. Vanilla brown butter. I accidentally on purpose ordered about ten thousand vanilla beans off of amazon and am seeking as many uses as possible. I’ve already made vanilla sugar, a vanilla body scrub and have even put vanilla beans in some of my boring daily smoothies. Makes me feel fancy!

And this pile of stuff on top of the oats isn’t too unusual- I rarely can eat baked oatmeal plain. Always need to trash it up with SOMETHING on top. Anything. ANYTHING!

I’d also like to participate in a swim meet in that brown butter. Except I’d probably lose. Because I’d drown in my own brown butter consumption.

This stuff is insane. This is what we’re eating today.

We’re T-day detoxing with caramel fruit and butter for breakfast. That seems appropriate it, right? Would you expect anything less? It’s the holidays!

I’m in a holidaze. Maybe we should just spike breakfast?

« Previous PostWhat Are You Baking For The Holiday Season?
Next Post » November Favorites: Food + Fun.