Real Life Wednesday: On What’s In My Purse.

Let’s look at the junk in my purse! In prep for traveling today I desperately needed a purse cleanout and figured I’m nosy… maybe you’re nosy… this is what I’m hoarding around with me. I’m going to show you. 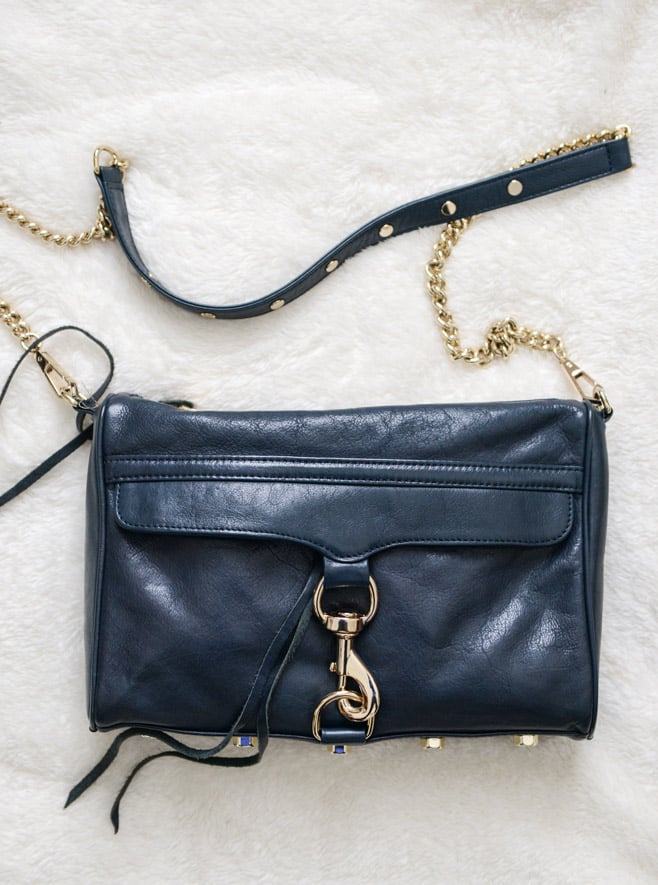 First things first: this is the bag (mine has gold hardware) I’ve been using since September. It should come as no surprise considering I’ve talked about the Rebecca Minkoff Mac bags constantly in my favorites posts nonstop. Last year I had a periwinkle one which I completely love, but it got dirty so quickly (I’m assuming from some of my denim/black jeans) and I really wanted a darker color that would hold up better.

I’ve bought another purse or two in the time that I’ve had this one, but I seriously cannot stop using this. It is the PERFECT size for me. It’s cross body but not huge; it’s small enough so my shoulder isn’t breaking but large enough that I can stuff a lot of crap into it. I prefer this size over the mini mac for that reason. I’m dying to get another one, but seriously… do I really need THREE of the same bags in different colors? No. I’m not going to be a brat. Two is bad enough.

AND NO OF COURSE MY STUFF WASN’T IN THE BAG THAT NEATLY. Real life purse dump: That’s all the junk that was stuffed in there. Probably been about a month. I don’t think I’ve touched it since I went to NYC in early December… or maybe even before that. Sheesh.

Anyhoo, here are some things. Let’s see what makes the cut. I stuffed it in my purse after lunch with Michelle last Friday. I got hungry, so I ate it while photographing and cleaning things up. That’s my fortune. Whatever. Do we think I have a lip color dependency? Probably.

I love all of these lip things above, with the exception of two products. I’ve never liked the maybelline baby lips products (I feel like they are more drying than anything) but I was tempted by the medicated version in the checkout line. Bought it, still don’t really like it. The other thing I don’t care for happens to be the maybelline color whisper balm. I mentioned this last year but I hate these things. Well, okay, I’ve only tried the one above. I actually have no idea why it’s even in my purse? I think it was in my car and I threw it in my purse as a means to get upstairs to the trash. But since my bag is where lip gloss goes to die, it didn’t make it’s way out until now. I don’t think these are moisturizing, I find that they apply unevenly and even if my lips aren’t dry, they make them LOOK dry. Not a fan. Bye bye.

I’m also not loving that Santa’s lip scrub by Lush. I love their other ones but this one is weird. It has actual chunks of confetti-like glitter inside. (which yeah, normally I would love since I’m like eternally 16 years old but no.) This is a Michael Kors pencil case that my brother and his girlfriend got me for Christmas a few years ago. I adore it and store most of my lip stuff inside. Except for when, well… I have as many products as I do above. 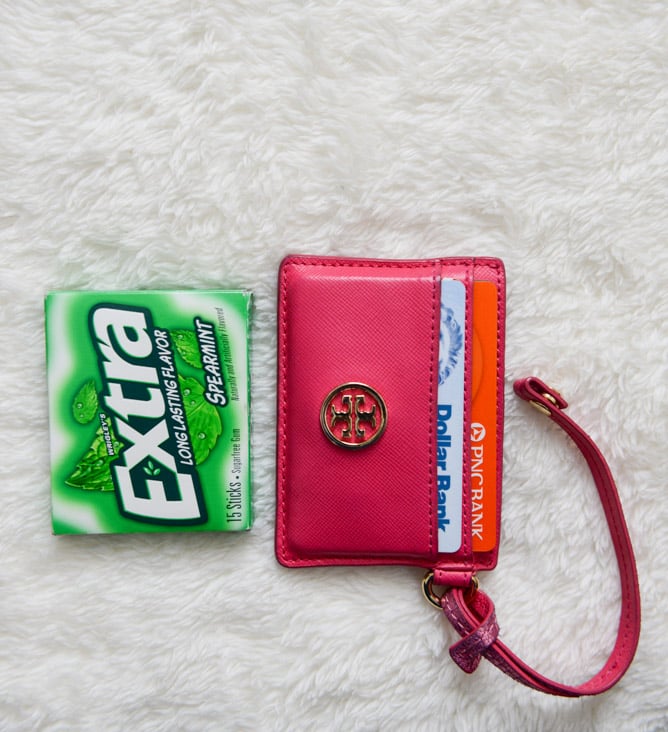 Gum, which speaking of, I’m not a huge gum chewer (it kinda hurts my jaw) but in case of emergencies… you know. Also, I’ve had this little Tory Burch wallet thing for over a year now and it saves me. It can hold my most important cards and a bit of cash and it’s what I’ll grab to take into the grocery store since I’m there fifteen times a week. It’s awesome! Except for when I leave it in my pocket of my coat which is upstairs in a closet and don’t realize it until I’m checking out at another store. #fail Random but necessary things: bobby pins (which go where all the missing socks go), a pair of kate spade studs (you know I’m obsessed), contact stuff (probably collecting bacteria so yes, I will throw it away, don’t harass me) and this bag that comes with tieks. It’s awesome because it folds into a little egg shape (see the first photo) but opens up as a tote in case you want to take off your heels/boots/uncomfortable shoes/etc. Or you can just use it as a… bag. I obviously did away with all the loose receipts and what not, but added a few things in. Some pens (loving the sharpie liquid pencils!), a portable iphone/ipad charger (the orange square in the first photo), a little hand cream and most importantly, some chocolate covered almonds for snack purpose. THEE most important part of a purse, in my opinion.

What bag are you currently loving right now? I’m completely coveting this one (LOOK AT THE STUD COLOR!) but within a week I could already see how dirty it would be. Oh yeah, and I can probably do many other important things with that amount of money, like EAT.

67 Comments on “Real Life Wednesday: On What’s In My Purse.”