Let’s make breakfast and eat it and talk about things. 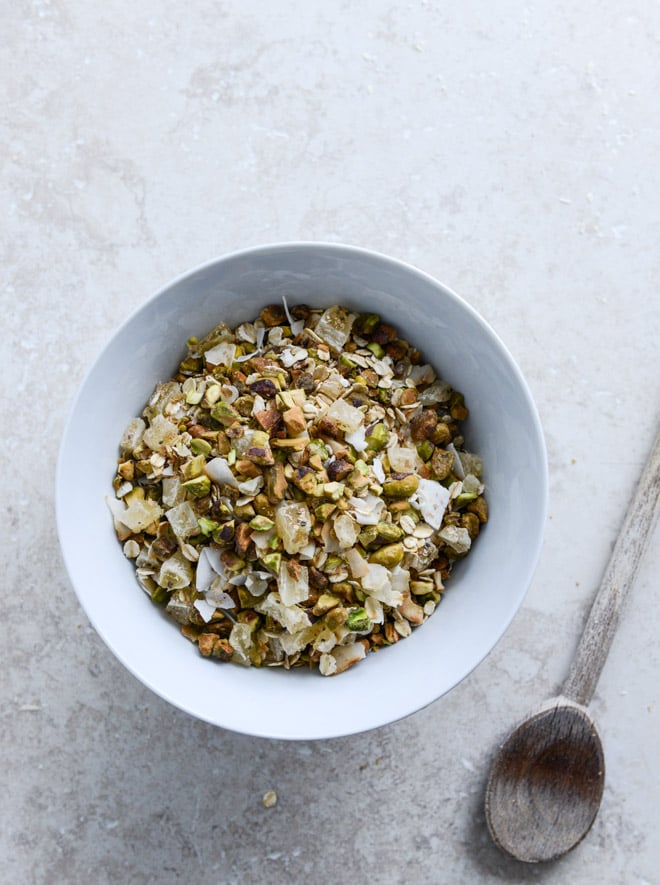 We’re kinda doing homemade cereal today, sort of, but if I’m being real? I rarely eat cereal for breakfast. It’s always for a snack. Or lunch. Or dessert. Or second breakfast!

The best kind of breakfast.

I’m pretty sure that at some point back in the 90s, there was a cereal named muesli or was it mueslix or something? Is that still around? Because I think I was obsessed. We had one heck of a cereal stash when I was a kid – it obviously involved some cinnamon toast crunch but the majority of it wasn’t overly sugary.  I loved anything that had major crunch to it, with my usual favorite going to Ohs! No, I’m not shouting at you with an exclamation point (though I certainly use more than enough so you probably didn’t blink an eye) but they really have an exclamation point in the title. Like Ohs! Oh yes yes.

Please tell me you’ve had them before. I could eat bowls for daysssss.

I was also a giant fan of the cereal oatmeal crisp and I actually looked for it the other day… to my disappointment, no oatmeal crisp. Why can’t the universe indulge in my 90s nostalgia? So here’s my thing about muesli. And yes, if you’re wondering, it is sort of like granola and usually contains oats and dried fruit and what not. I think. But it’s not all clumped together with butter and sugar, it’s more of a “loose” granola type cereal that is mixed with milk or yogurt. I believe it’s meant to be soaked in a yogurt or milk for a few hours or even overnight. It gets chewy and wonderful. Filling with lots of texture.

I could be making this up. But I’m pretty sure that’s what it is. Almost sure.

And the common dried fruit probably includes raisins. But ummm.

We know how I feel about that. Raisins are just grapes that lie about being delicious. I can’t get behind them. They ruin all the things. 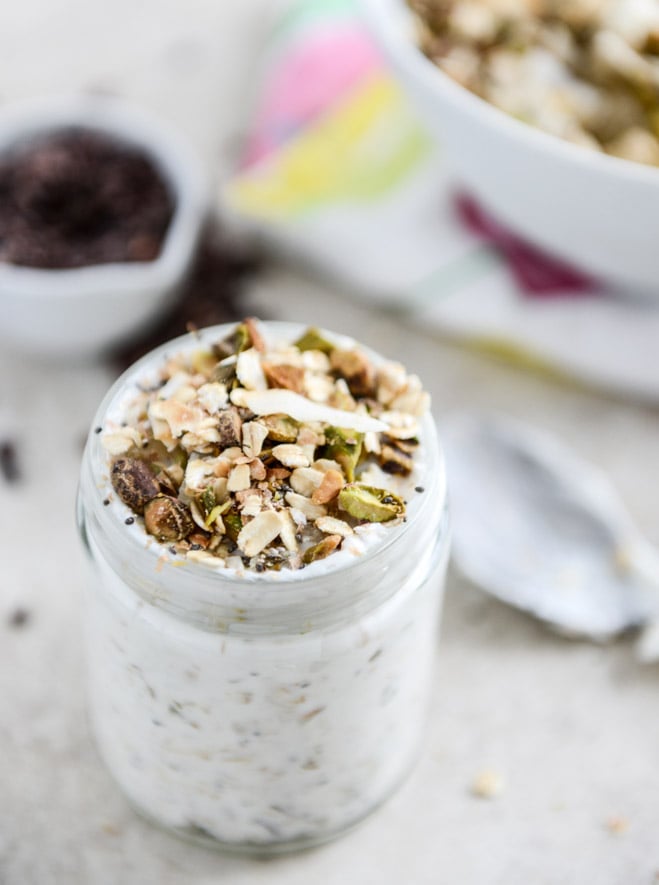 So! A few months ago I discover dried pineapple rings at Whole Foods – their 365 brand. My husband has been a dried fruit fanatic lately and I grabbed them for him as a snack.

And then I proceeded to eat them all. Love love love.

When it came time to make muesli, I considered dried cherries. I do like those. But I spied the pineapple and the cherries went out the window and here we are. All nuts and oats and pineapple in a bowl.

Oh and I don’t think I need to describe my pistachio obsession. Do I? (P.S. there is a pistachio cake recipe in my cookbook I love so much that I can hardly stand it.) 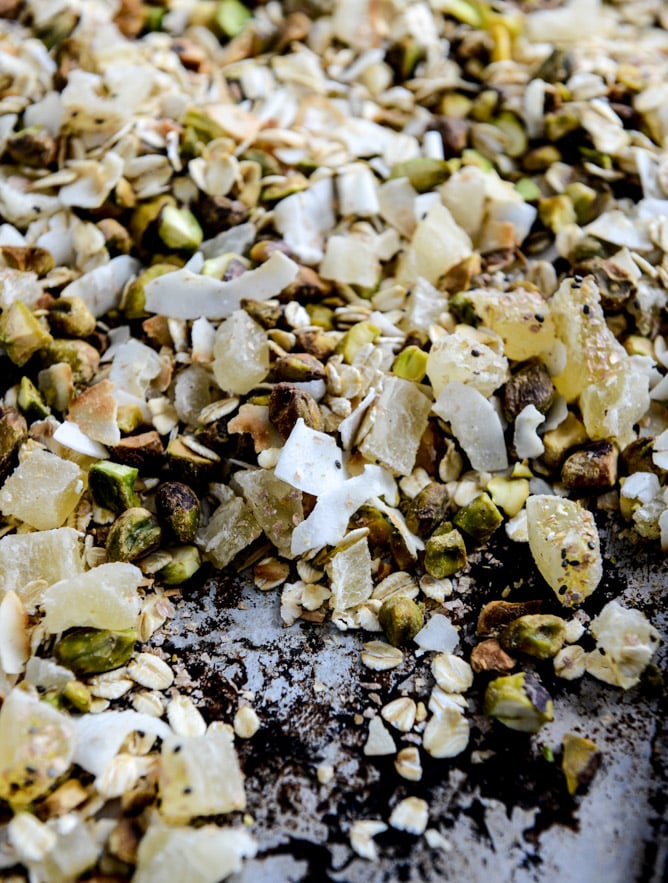 I also added some cacao nibs at the end and let’s talk about them for a second. They sort of kinda maybe… taste like death. At times. But! Only when they are alone. When combined with other foods, they provide the chocolate hint of flavor. Alone? You gotta be brave and strong. It’ll grow on you. Promise.

Anyhoo, this whole shebang can be mixed up on Sunday, tossed in a resealable bag and boom: you have breakfast or lunch or a snack or even dinner. It’s your own little cereal and you can add whatever you want. !!!! 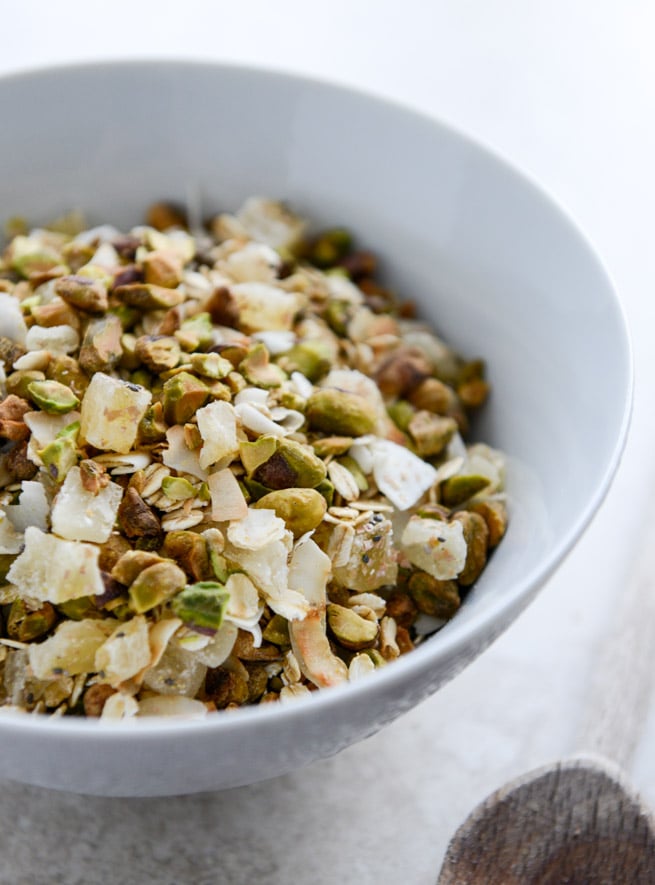 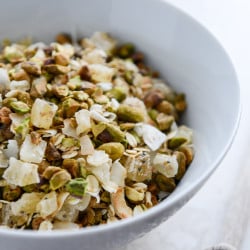 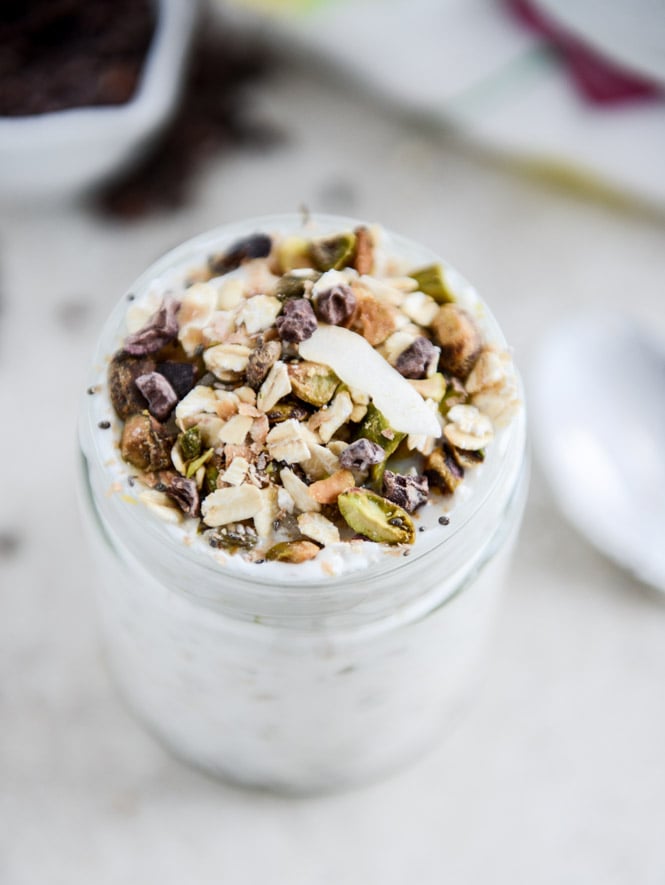 Fun colors too! All is right.