This cake is pure insanity. Which probably sounds ludicrous and like a load of bull because it looks… so… simple. But I swear! It’s special.

It’s like cornbread in cake form but with the thickest crumb topping that takes it over the top. This means I totally convinced Eddie to eat it by telling him it was “cornbread with a crumb topping” even though it was really cake because he quite possibly wouldn’t have eaten it if it was cake. Turns out he ate the ENTIRE THING. He ate half of it the first night. He had a plate of stuffed peppers but was all “I only want to eat this for dinner.” The next night I was out and when I got home, there was the tiniest little sliver of cake left. Itty bitty.

P.S. he is going to be seriously annoyed right now when he learns this is cake and not “bread.”

But wait. Don’t let the tomatoes freak you out. They legit taste like CANDY. With just the teeniest hint of sweet tomato. But mostly… candy. You don’t NEED the tomatoes, but if you’re feeling adventurous they are super good. They work perfectly with the cornbread disguised as cake (I mean, I told you it would be all corn and tomatoes up in here) and even taste delicious with the whipped cream. If you want to do something crazy you can even add some flavor to your whipped cream (booze?) but I just added heavy cream to this homemade whipped cream dispenser thing that my brother bought me for Christmas a few years ago. It makes me feel like I’m working magic even though I’m doing absolutely nothing. Except eating. I think the cherries would be perfect with regular cornbread too or even on top of chicken or steak, if you like the sweet and savory thing. I just adore these little guys and could not stop popping them. You could even candy them and shove them INSIDE the cake. Or bread. I realize they look a little funky but just try ‘em. So good.

If you want to forgo the tomatoes entirely and truly believe that I’ve lost every marble, this cake is like a yellow cake mashed with the fluffiest cornbread you can think of and some vanilla beans. Plus the crumble, which if we’re being honest, is the most important part of a cake like this. I’ll eat it all and won’t even feel bad about leaving you none. The thing is, I have no idea if this is dessert… or breakfast… or brunch? Let’s say all three.

And lunch, because well I definitely did that accidentally on purpose. 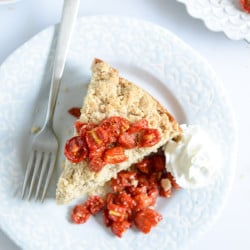