I’m halfway through this pregnancy (omg)… and here’s the stuff I’ve been loving. 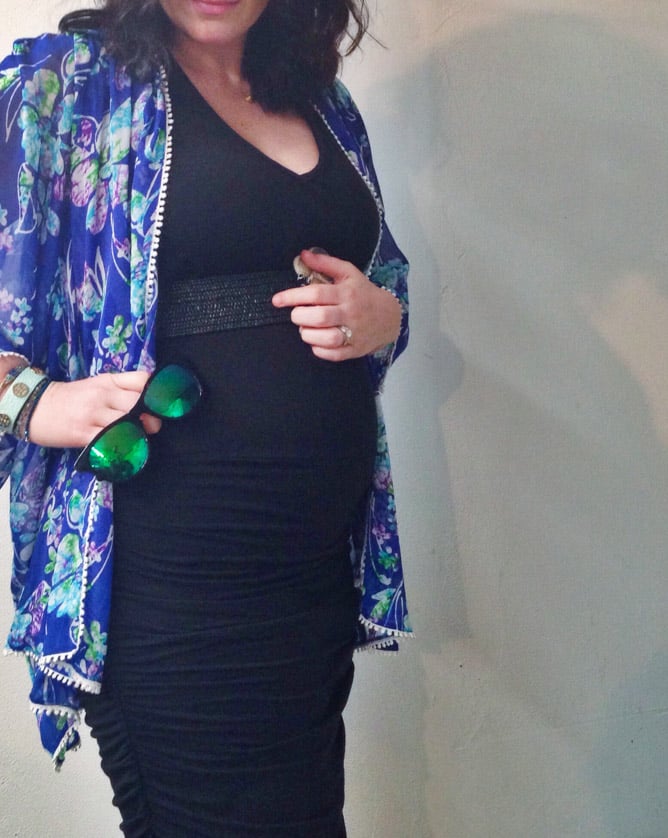 I seriously can’t believe that I’m a little over halfway in this whole pregnancy thing…  Not really sure if I can describe how I feel physically – I don’t feel like myself but I totally feel like myself. I don’t feel amazing and wonderful but I don’t feel terrible or bad by any means. I feel normal and good and like me but not like me? It is so odd. I cannot explain it!

I can thankfully still move around easily and exercise and stuff. But I totally notice some out-of-breath feelings when I walk up the steps or go for a walk with someone other than just myself. We had our anatomy ultrasound and didn’t even peek when it was possible to determine it’s boy or girlness. It’s still going to be a complete surprise.

These are the things that I’ve been L.O.V.I.N.G. the past twenty plus weeks. Twenty weeks sounds like for-ev-ER.

This big pillow has somewhat saved my sleep… when I do sleep. Almost immediately sleeping on my stomach became incredibly uncomfortable and kinda hurt. And I tend to go back and forth between being a stomach and back sleeper. I’ve NEVER been a side sleeper. I got this pillow around seven weeks and haven’t had a night without it yet. I prop another regular pillow up against the back of it to try and keep myself on my side and it works for the most part. The only love/hate thing about the makeshift pillow fort is that is puts a barrier between Eddie and I – but that’s also kind of amazing given how he sleeps. If you’ve read my blog for five years, you get this. The whole not-being-tired thing still blows my mind because it’s all I’ve heard people talk about for years.

For a few years I’ve been taking gummy prenatal vitamins… you know me and my gummies. But once I actually got pregnant I figured maybe I should step it up a little and not be a child. The vitamins were tough at the beginning because of the nausea, so I’ve always made sure to take them at night. I’ve been taking these garden of life vitamin code raw prenatals. I love them. BUT. I have had a massive phobia of swallowing pills since I was a kid, so every day I get a little anxiety over having to take three of them. I’ve embarrassingly choked multiple times but can get them down. I can find them at whole foods but usually can get them on amazon or vitacost for much cheaper.

If you know how much of a book freak I am it may come as a surprise to know that I really haven’t wanted to read… anything… when it comes to pregnancy. I am finally feeling more comfortable reading a few things, but since I was so scared in the beginning, I couldn’t even bring myself to read. I thought I’d jinx it. I stayed away from all forums. I didn’t even get what to expect when you’re expecting because of the reviews I read and how much it freaked some people out – and I’m a lunatic so I figured it would freak me out too. The only book I read was the panic free pregnancy. I loved it. It calmed some fears and kept the details matter of fact so I tried not to be so worried.  I do have a few other books like ina may’s guide to childbirth and what not. I’ll keep you posted on those!

Later this week when I talk about my monthly beauty favorites I’ll go into more detail about some of the things I’ve been using. But on that same topic, one of the first things I purchased when I found out was this l’occitane almond supple skin body oil. To be real, I’m not that concerned about stretch marks. I mean, if it happens, it happens. I don’t even know if my mom has them – I’ve never asked or paid attention! But I figured I’d jump on the bandwagon of buying one of these creams or oils that moms-to-be usually use, and I absolutely love this one. I wasn’t using it every single night – especially at the beginning. And I’m well aware that I could just use coconut oil too, which I always have a ton of. I was drawn to this after reading some reviews because it’s a spray (oh so convenient) and I’m nutty about almond-like scents. (embarrassing bad pun.) I haven’t had any itching yet or anything on my stomach, but now that I’m getting bigger I have been using this daily. I also have the pure shea buter from l’occitane and like that too.

The other somewhat beauty related thing I’ve been a psycho over is SPF. We haven’t had too much of a crazy heat wave yet so I haven’t desperately wanted to be in a pool, but I’ve managed to somewhat keep my face shielded from the sun and am whacked out about applying sunscreen before I go anywhere. All the time, all over. So far – no sunspots or darkening of my skin anywhere… yet. I’m so fair that it’s probably coming.

Ummm. Can we talk about hot dogs? This may sound ridiculous but we need to. I love me a good hot dog in the summer. My doctor says they are fine as long as they are cooked, obviously. I was a little iffy though – and a few weeks after I found out I was pregnant I learned about fork in the road hot dogs from Maggy. I rarely ever accept any products but I had no way of purchasing these dogs (they aren’t in my area) and when they offered to send me some, I jumped on it. THEY ARE SO GOOD! Ugh. Can’t even take it. I believe they are only on the west coast right now, so if you’re near there… get ‘em. For the other food taboos – I’ve found pasteurized goat cheese and feta. Deli meat hasn’t been a concern because I’ve never liked it, but if I did I’d just heat it up. Bacon and prosciutto and pancetta – I’ve bought nitrate free versions and crisped the heck out of them. For a moment, the scent of bacon made me sick though so there is that… eeek. I haven’t really done any caffeine (unless we count chocolate) because I haven’t needed it and don’t want to need it/want it everyday (I do miss the buzz though). Last night we ate sushi and I went prepared to eat a few raw pieces but only ended up wanting cooked things. So it’s all working out.  I do MISS EGGS! Ugh. I ate them a few days per week before. Like good old runny yolks. My Tieks! I know I’ve been raving about Tieks since last year (and yes, I purchase every pair myself, aside from a red pair they sent me in February for heart health – I don’t accept their products for review/promotion) but they have SAVED me the last few months. I didn’t think they could get any more comfortable but as I continue to wear them – they do! I’ve been wearing them a ton, probably more than any other sandals or wedges. I am still wearing heels and wedges and feel totally fine wearing them out. They don’t bother my feet yet. But for everyday activities or errands or working or whatever – I’ve lived in Tieks. There may be more comfortable flats out there but these are the first pair of flats I ever bought. I did buy a similar pair from Target a few months ago and they.were.terrible.

I still haven’t bought many maternity pieces. I’m kind of waiting for the fall when I have to do things with the book and need some legit clothes other than workout stuff or maxi dresses. Things I have found so far: some tanks and a pair of leggings in the Ingrid and Isabel line at Target. I’m fairly unimpressed with the Liz Lange line there… everything just seems kind of… huge. Nothing fits properly. At least not yet. So I love the few tanks I’ve found and otherwise have lived in regular dresses and skirts. Jeans and pants still fit with a belly band. I wear mostly sports bras or um… the genie bra that Bev told me about that is pretty amazing. Everything else still fits… for now.

The other tanks I’ve been loving for workouts or just running around have been from athleta. That’s the tank I had on in this post. They are not maternity by any means but they stretch and are so comfortable. I also have (versions of) this dress and this one too – lived in them! Super stretchy and work perfectly. Besides those, I’ve been wearing a lot of lululemon tanks I’ve had for years.

Remember how I said water had been tasting so incredibly weird? Tt might be getting a leeeeettle better, but the water issue makes me crazy because I can’t ever seem to drink enough. It’s like… it almost doesn’t… fit in my body? If that makes sense? I’m used to drinking close to a gallon a day and I can totally TELL if I haven’t drank enough. But in addition to water, I’ve been chugging down my favorite coconut water. Yes, it’s raw. I’ve also continued to drink kombucha – just this version in the gingerade flavor – maybe about a cup per day, but not every day. Smoothies were staples in the beginning but pretty soon I couldn’t handle them anymore – they saved me at first though. I make them with coconut water and frozen berries and bananas and am now getting back on the smoothie train. Love. (Other than those drinks, I’ve still had an occasional boylan soda and some of the iced passion tea from starbucks. It is SO weird to finally want flavored drinks!)

Trader Joe’s ginger chews have been a staple around here. I have a bag in the car and one in the kitchen. I don’t need them quite as often now but I ALWAYS have them around. Always.

It’s no secret that I’ve been quite the fruit fanatic, so that has mostly been my go-to snack. Even though I still rarely feel hunger (this is awful and I hate it and I pray it goes away), I’m afraid to leave the house without a snack. Since April I’ve had stashes of granola bars in my purse and car just in case, along with some almonds. I’ve been loving these cascadian farms chocolate peanut butter ones as well as these nature’s path chocolate coconut chewy bars. I don’t always want them but if I’m feeling hunger they taste good in the moment and WORK. So that’s that! Leave me some tips below or tell me about things that absolutely saved you during pregnancy. !!!!! I feel like I’m just living normal life as for now and not much is that different. It’s pretty cool.

We move this week and because of that – we haven’t bought one baby related thing – except for when Eddie bought this teddy bear. (spoiler alert: I almost died.) I already have nursery ideas in my head and am so excited about them… mostly because they revolve around books and something that played a big part in my childhood. The moment I decided what I wanted the nursery to be, I became an emo wreck and lost it and cried. I will tell you all about it SOON. And… perhaps once we move we can finally get a full length mirror and I can do some pics because… we’ve been living in a house for five+ years without one. But I guess maybe that explains my horrific neon fashion sense…