It’s September! Am I still allowed to talk about peaches? I mean, if I can find good ones here, you can probably find them almost… anywhere?

Well, if anything, you still have a couple days or so to live up the rest of the peaches before they go into hiding. LIVE IT UP. You need to start saving up for winter anyway. Something I’ve become over the last few months is a total breakfast carb freak. I mean, yeah, I’ve always liked pancakes and stuff but I usually prefer to have some eggs or something like that – especially so I don’t fall face first into the hardest food coma ever. Or even eggs with a pancake or two. BUT! Ever since popping this little bun in the oven I’ve wanted all the pancakes and waffles to exist ever in the universe.

Give me all of the pancakes and nobody will get hurt. A few weeks ago I had these perfect pancakes at Marty’s Market and they came complete with a HUGE hunk of cinnamon butter on top. And the pancakes were all hot and steamy and this pile of butter was melting all over the sides and it was just… just…heavenly. So I’ve wanted the cinnamon butter ever since, it was basically all I could think about. Eddie makes pancakes every Sunday and I’ve thought about whipping it up for that, but I’m usually stuck in the corner of the couch refusing to move like a lump because it’s the one time of the week that I don’t cook a darn thing. So anyhoo, that’s where the butter came from. The peaches came from my still out of control fruit obsession – it HAS to be because it’s just so hydrating and juicy – and all I could think of was fluffy waffles with these caramly roasted peaches in syrup and tons of cinnamon. Plus, I’m still seeing an overabundance of peaches at the farmers market and I secretly wish it would last forever. The good news is that your peaches don’t have to be *perfect* (which is impossible to find anyway, right?) because you’re going to roast the heck out of them.

I’m not sure if I can eat any other waffles now. I want yeasted waffles all the time – they are absurdly fluffy and like a big fat cloud that I want to take a nap on but also that I want to cover in sugar and butter and cut into itty bitty pieces and savor. They have the slightest yeasted flavor, but in a totally good way if you know what I mean. In a sense they remind me of the Belgian waffles we could make in college, where you’d have to stand for like eight minutes waiting to cook your waffle in the single iron during breakfast or brunch, and quite possibly while you’re atrociously hungover which made it taste like the best waffle in all the land. 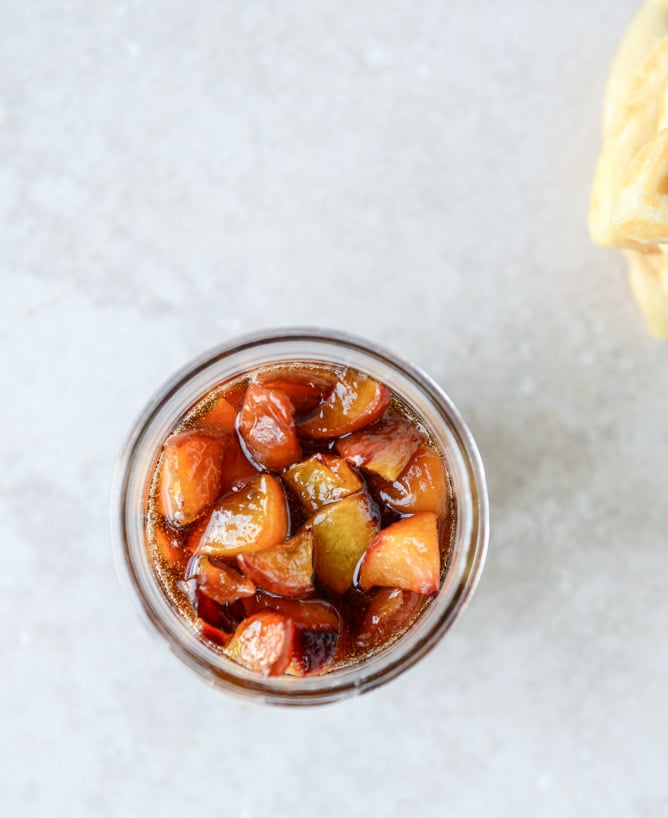 This is kind of like my final summer hurrah because even though it will stay warm and lovely for another few weeks, the peaches will be gone and I’ll be left with the produce rejects. But it’s okay because it means make way for BUTTERNUT SQUASH! Some people lose their mind over pumpkin, I lose mine over butternut squash. You don’t even want to know. (but you do so.)