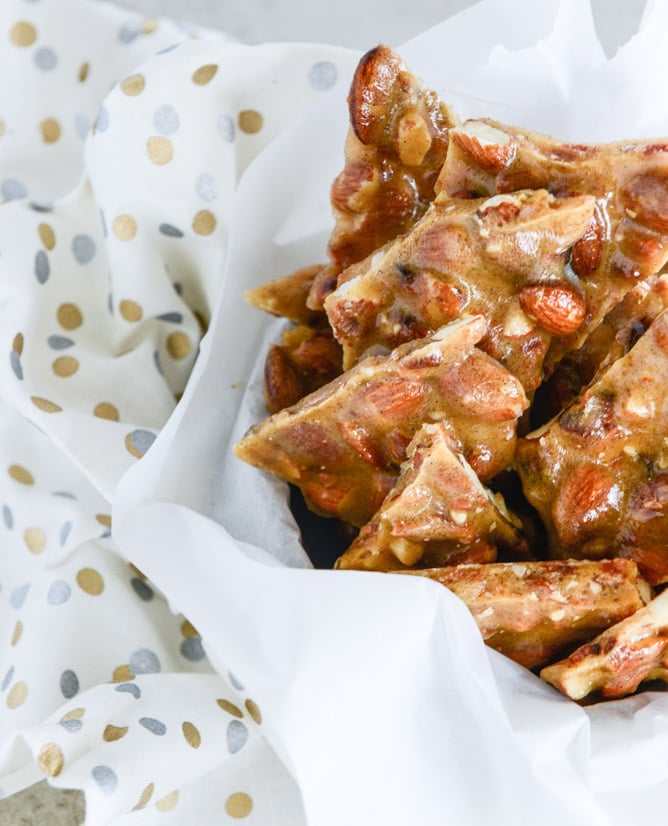 I made brittle and feel like this thrusts me into grandma territory. Like I moved straight on from being a mom into grandma mode.

It’s probably because while neither of my grandmas ever MADE any sort of brittle, the only type of brittle I ever stumbled upon was in Mother Lovett’s cabinet under her bar where she hid things like gum drops, peanut butter cups and two-year-old snickers bars along with a whole hoard of salt water taffy that we couldn’t touch. Salt water taffy with an approximate age of four to six years.

Oh and this wasn’t the same cabinet that hid the fritos, pretzels and bags of “party mix” – which they still totally sell by the way and which I sometimes pick up in the store for nostalgia purposes. It’s full of pretzels, dorito-like chips, some sort of cheeto hybrid thing and something else horrific (maybe bagel chips) that I always picked over and left for everyone else. Even the bag was the epitome of delicious tackiness with it’s balloons and streamers and bright colors adorning the package.

FYI: just take a guess at what I’m going to need to “run to the store” for at around 3:37PM today. So while brittle wasn’t something we made during our marathon holiday baking sessions – those were reserved for fudge, chocolate chip cookies, thumbprints and peanut butter blossoms – I definitely remember the occasional package that I saw sitting in the cabinet.

And I was TOTALLY grossed out by it. Like, really. It never had any appeal. Probably due to the lack of chocolate or gummy bears or both. Let me TELL you about this recipe inspiration. Back when I was doing the book tour, I was in New York City in September and somebody handed me this bacon and bourbon cookbook. Yes. A cookbook all about bacon and bourbon. First thought: why the HECK did I not think about this or write this. Second thought: why did I not even KNOW about it until now? I sat there and was just dying over it for at least a half an hour, which was mid-interview so that was professional and all. I wanted to make EVERYTHING inside the book and it was complete torture considering I still had a little over three months to go before I could down the cocktails.

Then I got home and made about fourteen recipes inspired by recipes from the book. My cookbooks are still packed away from the moving this past fall, but this book is propped up right in my kitchen. Like just to be my daily inspiration. The original recipe was for bacon peanut brittle, but I was all over these smoked almonds from Trader Joes and determined that I HAD to use them. You can use smoked almonds (keep in mind that the bacon is already smoky) or regular raw or roasted almonds – it’s all up to you. So yes, it took bacon – shocking – to get me to make, and heck, eat, BRITTLE.

But now. I’m in love with it. I think this might be one of my favorite new holiday gifts and will make a killer addition to our cookie trays. I have to make more since I clearly consumed every last bit (wouldn’t you?) from this recipe a few weeks ago. But it’s pretty darn simple and I am not complaining. I’m accepting my new granny role with open arms. I mean… the crunch.