life with max: two weeks in.

I am slooooowly coming out of the two week newborn haze!

That’s a lie. I am still in the newborn haze. 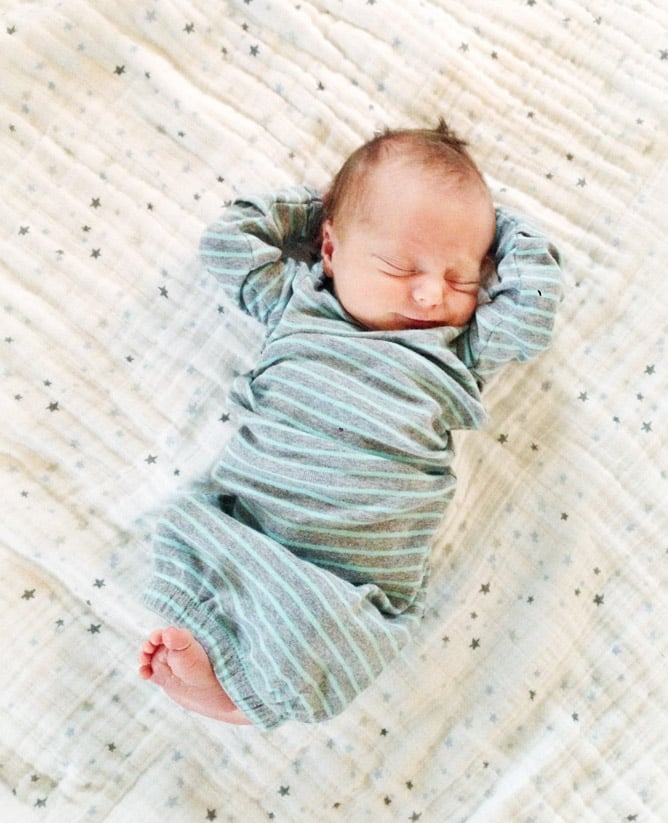 {this is probably my favorite picture of him ever}

Last night I said to Eddie that we should order pizza. Then I said… oh but wait, we just had it three days ago. He’s like… Jess… no, we had it TEN days ago. Oh how my days are running together.

Honestly I have no idea what day it is. Ever.

Right now, at this exact moment, I feel like this: I know this stage won’t last forever. I know it will fly by as it is already and that I will miss it and crave it for the rest of my life. At the same time, I feel like I will never be able to leave the house alone again or live my life again. I told this to my mom who laughed hysterically and was all OMG I SO REMEMBER THAT. These last two weeks have been a wonderful whirlwind. God do I love this little nugget so much. Eddie and I keep saying to each other “how can we love him so much?!” We said it moments after he was born and just again this morning.

I swear everywhere we go (like, um, the doctor’s office?) it’s so obvious that we are first time parents because we just stare at him in awe. While he does amazing things like SLEEP. It’s like, look at him sleeping! He is perfection!

And I’m totally the person who gave PICTURES OF MY KID in frames to people for Christmas. Ugh. I’m that person!! I don’t even know me.

The incredible love for him does not surprise me, but let me tell you something. I never really bonded with my “bump” or the baby in my belly, and it killed me the ENTIRE pregnancy. It didn’t even happen much once he started to kick. I didn’t talk about this in my pregnancy updates because 1. I’m sure I was afraid of being judged in my massively hormonal state and 2. I didn’t even want to put it in writing because it broke my heart so much. Even right before he came out, I was scared of how I would feel. I’ve read that this is common but no one that I know – not in real life or fake online life – has experienced this. I was super scared, but the moment he came out I just about died with overwhelming love.

I have never seen Eddie in this state before… EVER. You know, he is a super rational person. Really thinks with his head about 99% of the time. Where I, on the other hand, barely EVER think with my head (yeah, it’s true) and ONLY think with my heart. This baby has melted him into a puddle and I have never seen anything like it. It’s the most wonderful thing. Also, I’m totally now that girl that understands the whole “wait until you see your husband with your newborn…”

He’d be walking around the hospital room and I’d be like YOU HAVE NEVER LOOKED SO HOT IN YOUR LIFE.

And it’s not like there is any denying: he is Eddie’s clone. Sometimes I look down at him and I’m like… dude, I’m holding your dad. I keep asking Eddie if it’s incredible to have a son and one that looks just like you!? He tears up. Constantly. 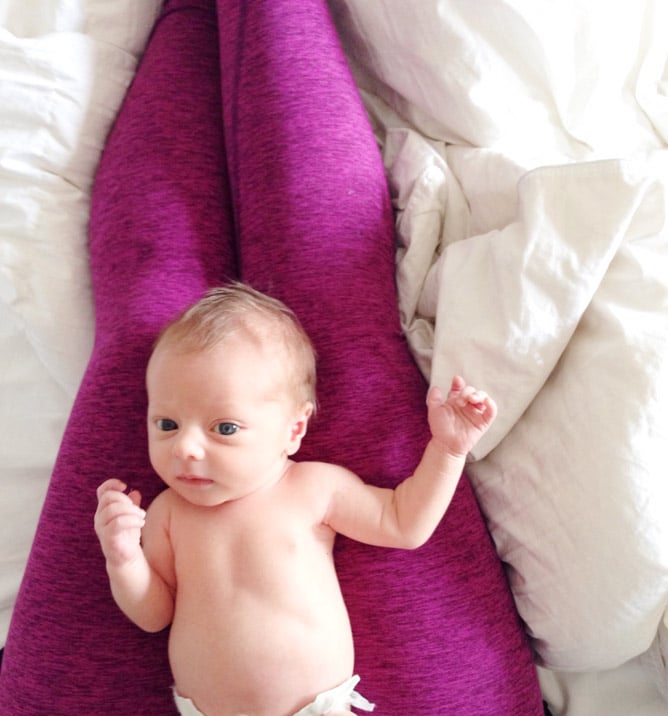 So real life over the last two weeks? It’s looked like this.

I went five whole days without one wink of sleep. I was awake the entire night I was in labor (when I didn’t know it) with him. The night he was born, I refused to sleep because I couldn’t stop staring at him. Not because I was scared, but because I couldn’t believe that he was mine, that he was ours. I looked at him the entire night. Picked him up just to stare. The next night, he cluster fed for HOURS and I didn’t sleep again. The first two nights home, we were trying to learn what was going on and he was awake to eat so much and I was afraid to sleep (still sort of am) and no.sleep.happened.

It wasn’t until we’d been home for two days that I finally got a few hours, broken apart.

Is it crazy to say that I don’t mind? I must have been so high on adrenaline, but I also knew it wouldn’t be forever. And the only time I started to really lose it was when I was hungry. As long as I was fed, I could deal.

Right now, I’m getting about two to three hours a night, not consecutively. Who knew one could survive on this? Speaking on food, I AM STARVING. I am so thirsty and am eating everything in sight and drinking more water than ever. I’m pounding coconut water like it’s going out of style. For the first few days, Eddie would literally feed me while I fed Max and tried to get my bearings. I am talking like – hold my water bottle to my mouth and spoon feed me snacks – type of thing. It was insanely vulnerable and perfect.

And speaking of feeding… I had no idea how much I’d love feeding Max. Oh my god. I love feeding him so much. It’s the reason I don’t mind being awake all night and day. For the last two weeks we have lived on the couch or in bed. We’ve watched countless Christmas movies and more trash on E! than I ever thought possible. The first few days we were home, I was cleaning out paperwork and came across the little paper booklet they gave me at the hospital with newborn tips. It said something along the lines of “breastfeeding is the first way a baby learns to love its mother and it’s also the baby’s first experience in pleasure and happiness.” For some reason this made me MELT and I cried like a child and it meant so much to me. Maybe because I love food and am food obsessed – but seeing the “bonding moment” written out in words, the moment that I already was feeling, was just too much for me.

I am so thankful that this kid is eating like a CHAMP. He latched within minutes and basically has never stopped. I am so grateful because it was a huge fear of mine – many friends have struggled with feeding and in my usual “worst case scenario” brain, I was convinced I would too. I am so, so thankful this is not the case. I have had no issues yet, but I know that they could still arise in the next few weeks or even months. I still have no idea what I’m doing, but I do feel like there have been a few things that have helped me: we feed skin-on-skin almost every single time and have since he was born, I drink more coconut water than I ever thought possible on top of regular water, so I’m super hydrated, and I’m eating a ton – mostly balanced and some junk too, give it’s the holidays. But – I really don’t know anything and could just be making assumptions. 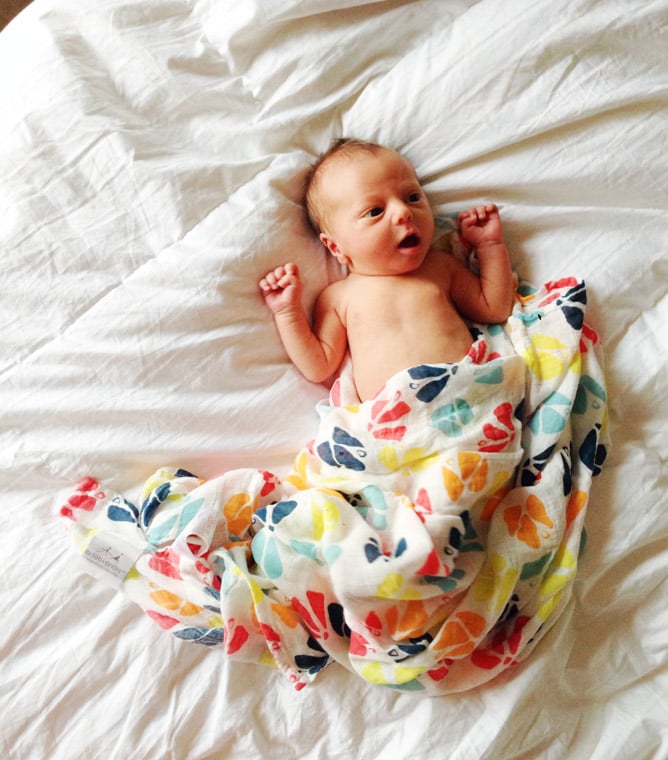 Eddie had to go back to work right when we got home, so we were immediately thrown into life together… ALONE. That morning was so hard because Eddie was so devastated to leave and I was semi-nervous, but the truth is… I had nothing to do except care for this little bundle of joy. All recipes for the blog are done for months. I wasn’t even thinking about cleaning up the clutter all over the house. It really was all about survival, just like many of you have told me.

The first day, it took me two hours to make breakfast. And when I say breakfast, I mean like almond butter on toast. I couldn’t really shower for about two days. And when I did, I wanted to scream VICTORY! So yeah, moms, I GET IT NOW! All we do is cuddle all day long. And eat. SO MUCH.

And I’m not kidding: I can’t put him down. I just freaking love him so much that I can’t put him down and I can’t stop staring at him. In fact, as I type this, he is sleeping on my chest. I realize that someday this may be a huge issue if he expects to be held constantly but man… I can’t put him down at two weeks old. Truthfully, I’ve been slightly better at it these last few days – I’ve done things like clean the kitchen and put away Christmas gifts and stuff like that. But really… I want to hold him 24/7. And at night when Eddie gets home, I love seeing his eyes light up because he can’t wait to hold him and snuggle him. UGH. It’s just so good. 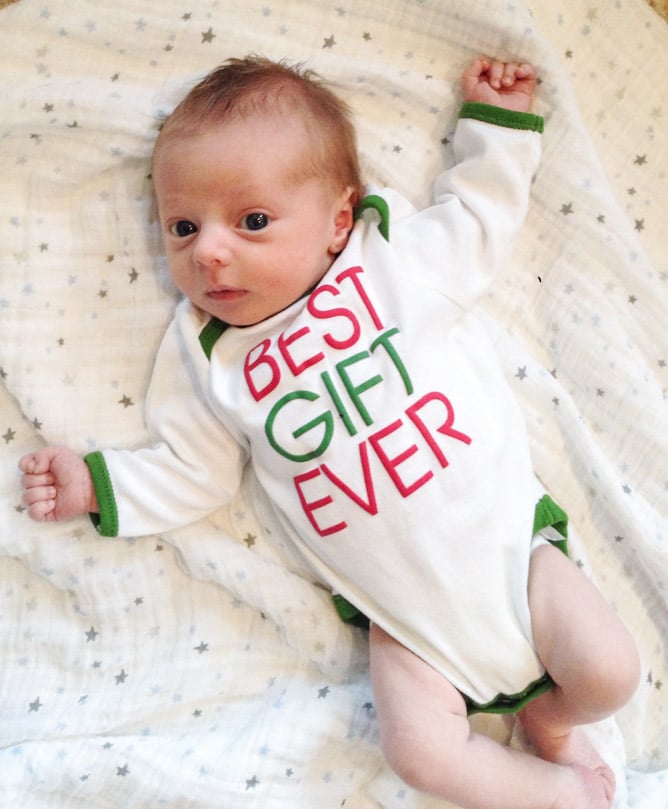 I feel fairly normal and pretty good – the only issue I had was from the stupid epidural I ended up getting. My back has hurt so badly that I can’t imagine EVER getting one again. Like, hurt to the point where I couldn’t get out of bed, walk properly or bend over. It’s like the deepest bruise ever. I’ve been super annoyed with it. What really helped me in regards to that though – I had bought a belly bandit to wear after giving birth and it’s been a lifesaver because of the support it’s given my back. So that’s a total win.

I can’t believe how much Max has grown already – it’s killing me. He looks different everyday and his belly is fatter and he has more chins. I DIE. I want to stop time! And with the holidays being so crazy, it still feels like we haven’t even got to spend time as a family of three, just us. Unless you want to count the middle of the night while Eddie sleeps next to us and we eat and watch The Girls Next Door and Fresh Prince of Bel Air reruns. I mean, that’s pretty fun. I never ever ever want the holidays to end, but for the first time in my life I’m kind of looking forward to getting back to “real life” or should I say “new life” – and enjoying regular days without tons of visitors and parties and whatnot. So unlike me.

I’m hoping to do an update every one or two weeks – so I don’t forget all these magic moments. Oh and I’m TOTALLY going to do baby favorites each month on this page – starting in January. In the meantime, he is just my favorite everything. Cue the MUSHY FACE.