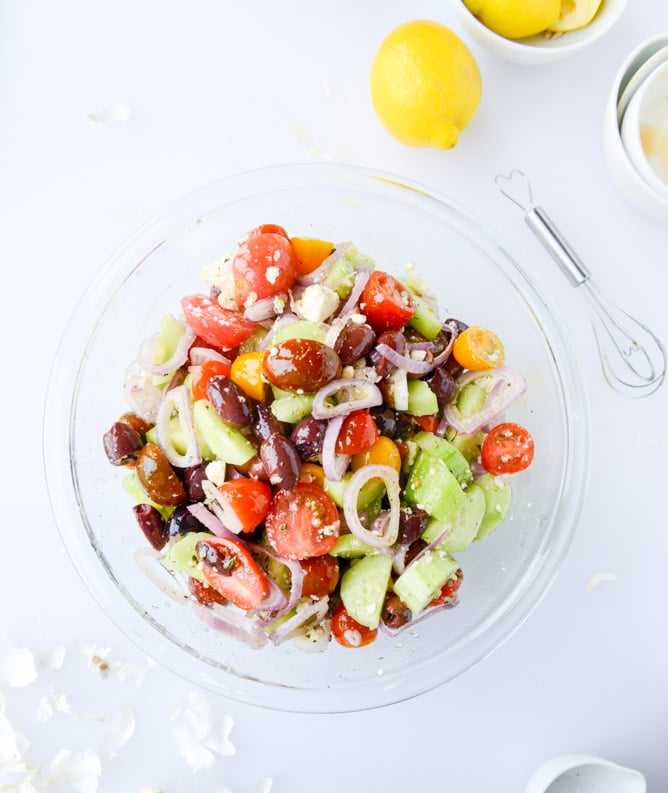 Like super cheating. I’m only telling you about FIVE ingredients today – five ingredients in my favorite salad. A salad that can be lettuceless too, which is even better. Okay, maybe a few extra ingredients. There is a dressing. My crazy favorite salad dressing, slightly adapted from one in my cookbook and while it pairs fantastically with this greek salad, it works on all salads. All salads! Make a big batch and keep it in your fridge.

And then, pita. Whole wheat pita to be exact. We will chat about it soon. In just a few scrolls.

Just a few scrolls? Oh 2015. Get with it. I desperately need to, considering the song that has been playing in my head over and over is “pretty fly for a white guy.” What. This dressing is my dream. I usually go for a simple olive oil and vinegar on my salad with lots of salt and pepper. If I have time, some sort of homemade vinaigrette. So this is me having time, and it’s awesome because you can make it ahead of time. It has extra virgin olive oil and red wine vinegar, but it also has honey, lemon juice, crushed garlic, dried oregano and dried dill weed. The oregano and the dill MAKE this. It sounds easy and it is. And these flavors mesh and create wonders.

I swear. I swear on my teddy bear. Once I whip up the dressing, I pour it over my oh-so important five ingredients.

A leeeettle bit of feta. This is why I do what I do:

Tomatoes? Go for the rich little cherry or grape ones. Halve or quarter them. Cucumbers? Buy a big seedless one, peel it even if you don’t mind the peel. Cut it into cubes. Toss in your olives. My most important rule? The SHALLOTS. I prefer thinly sliced shallots over traditional red onion in slices or chunks. Shallots are slightly sweeter and don’t accost your tastebuds in the same way. The flavor is somewhat milder and since the onion portion will be raw, I say shallots win.

And the biggest player… the cheese. No kidding. I like to take half of the feta that I’m planning on using for the salad when serving and crumble it in. Let it marinate. Have you ever had marinated feta? Tastes like unicorn tears. When you want to eat your salad, go for it in it’s pure marinated form or toss it with some butter lettuce. If you really want to get freaky, add in a few marinated artichoke hearts. The beauty of this is that you can use the ingredients that YOU like. For instance, I tend to go a bit lighter on the cucumber because Eddie isn’t a fan. I go heavier on the olives because I could survive on tart and briney things for the rest of my life.

I go doubly heavy on the feta, because… If you let your salad marinate, you should definitely try making your own pita in the downtime.

Why haven’t I been making my own pita forever? I’m annoyed. I’m annoyed that I haven’t and that I’ve wasted good money that could be spent on shoes on grocery store bagged pita instead. 2015 is all about life lessons. I made a whole wheat version based on this recipe from the kitchn and OH MY GOSH was it ever soft and fluffy. In addition to this salad I would like to suggest 13 pounds of hummus for pita dipping purposes.

These are easy. Yes, you make a yeasted dough. My go-to doughs are almost always foolproof as long as I use lukewarm water and honey, and add the salt with the flour. TRY IT! Once this rises, you cut it into equal pieces (again, do your thang. do you want mini pitas? a pita the size of your face?) and roll it out until it’s super duper thin. Like REALLY thin. Throw it on a hot cast iron skillet for three-ish minutes, flipping once, and you’re done. You have pita in your kitchen!

It’s fabulous for soaking up the extra dressing. Trust me.

It’s fabulous for sandwiches and peanut butter and bananas and even a bacon horseradish dip in your mom’s fridge. It’s all that and a bag of chips. Except it’s pita. You can do it!

Let’s salad up this Monday. This is totally a salad that deserves a face dive.