When vegetables have never been your thing, you’re allowed to have new favorite salads all the time. It’s totally acceptable and not basic in the least. I’m not digging the fact that I just said “digging” whatsoever. I’m actually quite mortified. Which would be the fourth time in two days that I’ve said I’m mortified by something, and Eddie shot me down the first two times, saying that it was QUITE dramatic of me. As if.

Dramatic or not, I am loving these juicy little fruits. Mine were perfectly ripe. Oh man. They were fabulous. So, so good. My mouth is watering just thinking about them and that is no exaggeration. Surprisingly.

And! I don’t love dried apricots, but the fresh ones? Give me a case. I challenge you to an apricot duel. Pretty sure we both win.

A honey lime vinaigrette to cover the entire thing in more flavor. Does it get any better? 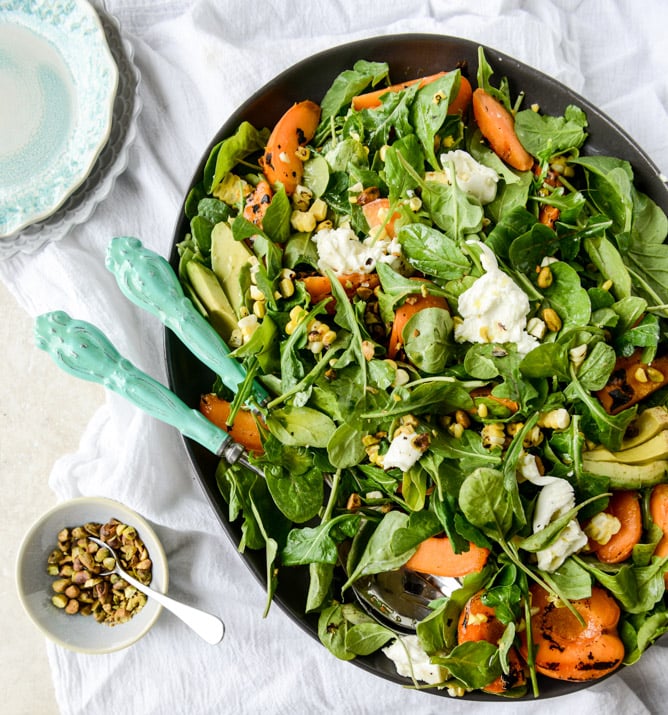 Well, yes, it does, considering that we have doughnuts and pizza and tacos and sangria in this world but as far as salads go… I don’t think so. At least not today. On a Monday after copious amounts of almond torte and pulled pork (not necessarily in that order, though now I desperately want another piece of torte) and maybe bourbon cherries. Sometimes I like to live in a stereotypical, predictable world. You know?

Here’s one thing that I love about this salad. It can be a starter salad for party or scaled down to be a first course for your dinner tomorrow night. BUT. It can also totally be a lunch salad, maybe even a dinner salad – like one of the ones that seems super simple but totally fills you up without being piled high with chicken or fries? (Yeah I know.)

We actually can’t stop eating this. It’s been our patio meal for the last few weeks (finally replacing some constant fajitas) and while it has changed slightly each night (so what, one night I DID add chicken and BBQ sauce…), it’s super similar. It’s easy and delicious but most of all, it’s refreshing. But now I really need that piece of cake.