Hugs in a bowl! Hugs in a short little bowl. 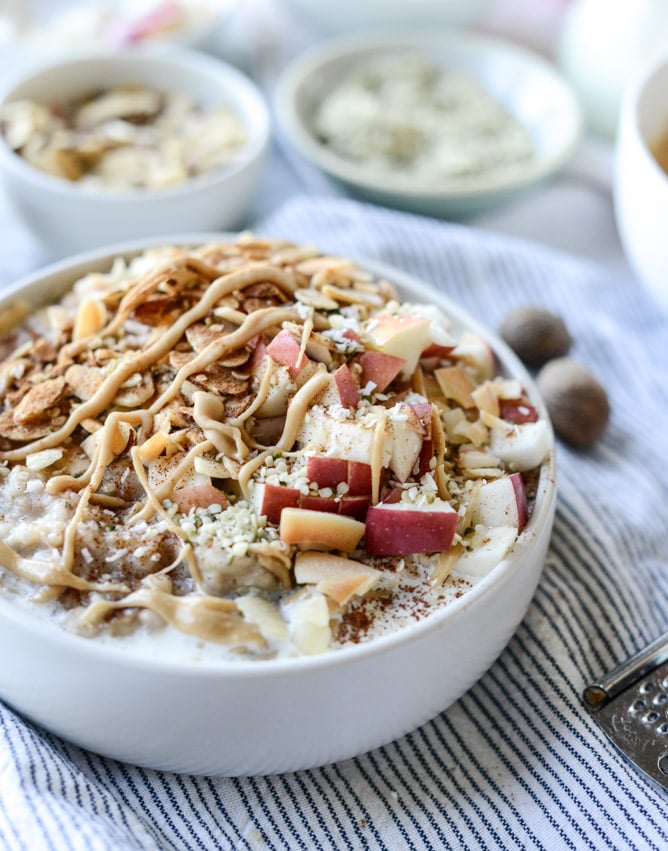 That’s what’s on the menu today. A cinnamon apple-y hug in a bowl. I don’t hate it!

It’s also kind of like dessert in a bowl, depending on how you look at it. This is one of the most comforting breakfasts I’ve made in a long time (that doesn’t include bacon, of course) and we can’t.stop.eating.it.

But wait! How was your weekend? What kind of horsing around did you do? What did you get in to? And most importantly, did you consume apple cider, pumpkin beer or cheese soup because OCTOBER.

It’s just like the best month ever. I can’t help it. So. I have rambled on here approximately 874 times about my love for the quaker instant oatmeal packets when I was a kid. Yeah yeah, I know. Broken record. Seriously, I probably ate them for ten plus years straight, often enjoying them for an after school snack or dinner. And, biggest secret that isn’t even a secret? After I had a Max, I had a few weeks of loving on them because 1. I was hungrier than I’d ever been in my life and 2. I was craving all sorts of nostalgic flavors from my youth.

I know I know, I just told you this.

And that’s kind of why I made these. And Max is more of the reason too! I usually save this sort of thing for the baby page, but all of a sudden Max has become SO insanely excited about all food. He’s been eating finger foods since he was six months old, but in the last few weeks he has started getting ridiculously excited about any and all foods – to the point where if you’re eating something and you don’t give him a bite, he gets MAD. 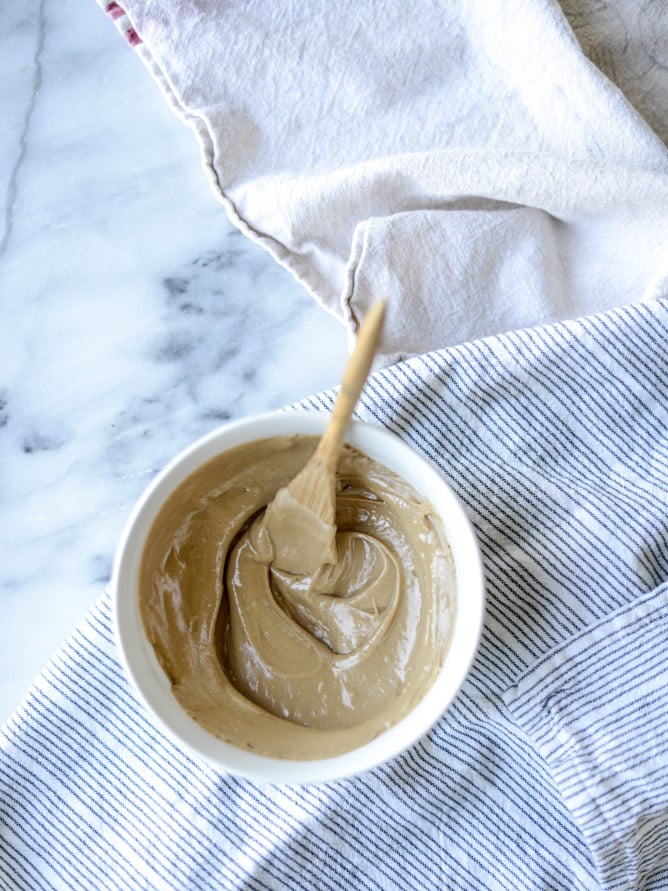 We find it hilarious, as most obnoxious first time parents would. But all gushing about our first born aside, I made these oats because breakfast is my favorite meal to share with Max. We usually have scrambled eggs and toast and blueberries or something.

But with the chillier weather (um, hello, we saw SNOW FLAKES yesterday!!), I’ve been craving something warm. And since I don’t have the unlimited amount of time to make a wild and crazy breakfast (oh trust me, I still THINK I have the unlimited time until I get in the moment), something overnight sounded incredibly appealing. And also like it would free up my hands for a few minutes in the morn.

Plus, I adore steel cut oats in all of their chewy glory. So much texture!! If you’re a texture freak like me, I know they’ve gotta be your thing too. Right?! They are kind of maybe definitely the only oats worth eating that aren’t in cookie form. But no fear, if you don’t have all those ingredients, you can totally use regular milk, regular butter, all the things that might be hanging out in your fridge. It’s cool. Do your thang. I allowed my oats to sit in the slow cooker on low for exactly eight hours. I stirred only once, because the reality is that if you are making these overnight, are you really going to wake up and stir once or twice to prevent some crispy edges? I doubt it. If you decide to make these during the day and then reheat in batches (completely doable and still delish), stir a handful of times if you’re around.

If you aren’t around or want to let them cook overnight, you might end up with some oats sticking to the sides. I did, but I don’t mind a little texture. This also heavily depends on the intensity of your slow cooker and if it acts like a bad ass and it’s low setting gets super hot, I’d recommend cooking during the day. Some cookers are wacky and have minds of their own. Oh oh oh and we NEED to talk about what is drizzle on top here. It’s maple syrup, boiled until bubbly and then WHIPPED. Homemade maple cream, if you will. We love the maple cream from american spoon so so so much and buy a jar every summer. It gets drizzled on pancakes and waffles and in general, most breakfast foods. Obviously, I had to try making my own annnnd… basically now my life is over.

If you find me head-first in a jar of maple cream, you know what happened.

Since we always talk about toppings for life, I doused my bowl in toasted almonds, hemp seeds, more apples, crunchy shredded coconut AND coconut chips and that whipped maple situation.

It is certainly a situation I can’t get enough of.

Oh and P.S. these do NOT taste like coconut (even with the milk, butter and oil), they are just wonderfully creamy and smooth and your ideal October breakfast. Don’t stop, get it get it. 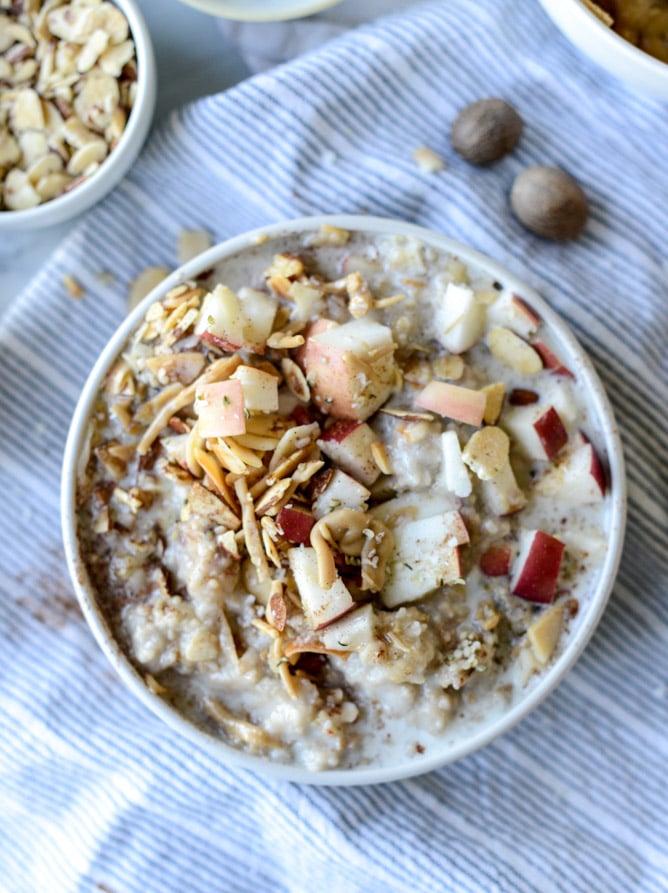 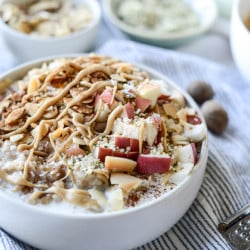 [i used this tutorial for the maple cream]
Course: Breakfast
Cuisine: American