life with max: one year in. I’m not as totally flipped out about the actual ONE YEAR as I was about the two or three months leading up to the one year. Crazy, right?

Maybe it’s the hustle and bustle of the holidays or the fact that I’ve been so sentimental about it for a few months, but I’m shockingly okay!

MY BABE IS ONE. 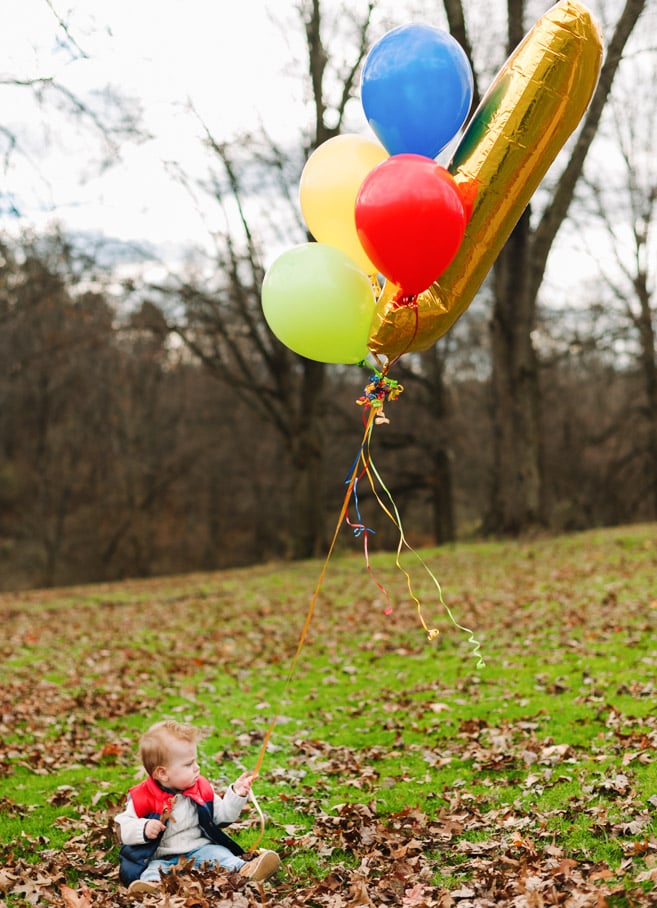 And that’s all I’m going to say about that.

(Except that I do tell Eddie that every single time I walk into our master bathroom (which is, uh, all the time), I have flashbacks to the moments before we left for the hospital when I was in labor and I’m like whaaaaaaat. This was NOT 365+ days ago. No no no no.)

I planned on having a HUGE recap post of Max’s first birthday, but I kind of got lost in the moment of his birthday party and barely snapped any pics. Um, can I just have a personal photographer on hand for every second of my life?

We went back and forth on a theme for a few months but nothing quite felt right, so we just did a bunch of bright colors. Red, blue, orange, yellow, green, purple, pink. Like a birthday colored by sprinkles. 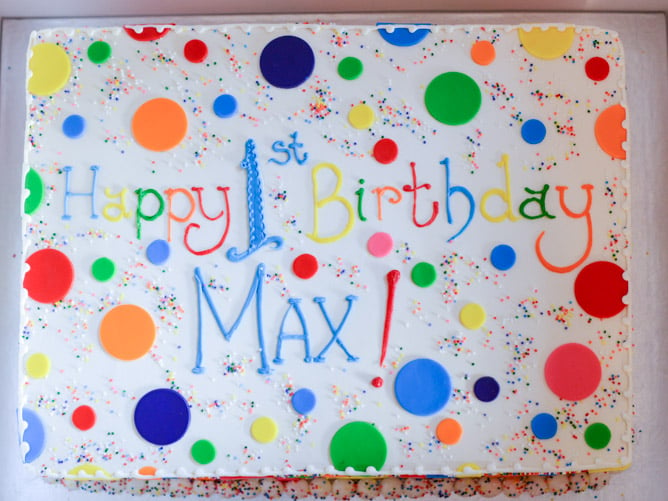 The cake was PERFECT. (and from bellachristie if you’re local!)

I bought a few bright and fun decorations from Party City and we hung them up all over the house. If I was crafty, I probably could have made the décor, but I didn’t want to find myself in a puddle of tears multiple nights in a row before the big bday. You know?

The sugar was a hit! Max was hesitant at first, but then he dug right in. {I think he ate a streamer first.} Um, also, can we talk about how he randomly does this in his stroller?! He kills me. I LOVE HIS FEET. And I hate feet.

I don’t have have a massive update this month, there aren’t many big changes, but more so a bunch of little things.

Just this week, Max started randomly saying “OH YEAAAAH” and it’s pretty much the funniest thing I’ve ever heard in my life. I’m desperately trying to catch it on video. And we can’t figure out where he learned it because none of us say it often? 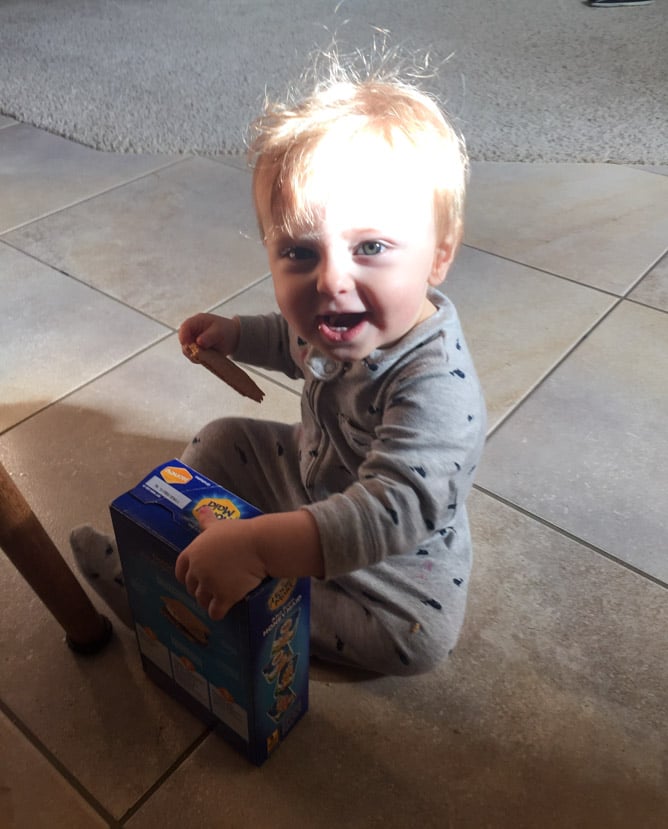 One morning two weeks ago, I peeked around the island in the kitchen to a verrrrry quiet Max. He had found a box of graham crackers in the pantry and was just chomping away.

Oh oh. Which brings me to.

Many of you have asked that I do a post solely on Baby Led Weaning. I still really don’t feel like I can dedicate an entire post to it, but here are some of my thoughts:

-Read this book first (or this one), before doing or trying anything.

-The first foods I gave Max were steamed sweet potato and broccoli, making it so soft that it could squish between my fingers easily. You want to cut the foods fairly large – not huge, but big enough so that they can hold the food and kind of gnaw on it.

-Most books on Baby Led Weaning address the fear of choking issue, but YES I was scared of this. But I’m scared of everything with Max. The only thing that got me over the fear was knowing what to do if the time came, and being consistent with the BLW. And not taking my eyes off of him. He has never choked once. This doesn’t mean I don’t still watch him life a hawk.

-Just in case, I prep a few staple foods every Sunday. I steam veggies (sweet potato, squash, broccoli, green beans) and sometimes apples with cinnamon, and cook some kind of pasta. This gives me easy options if Eddie and I decide we want to order something that won’t work for Max or if I need something in a pinch. I also mix them together and into dinners or random recipes.

-I have a handful of purees on hands, mostly veg and fruit (along with yogurt, which Max LOVES), in case he doesn’t get enough of those food groups that day. By this, I just mean that if he throws broccoli off his high chair and doesn’t want it, I will give him a few spoonfuls of fruit or veggies. He still REALLY loathes puree. I do this maybe once every two weeks or so. He prefers to feed himself and I always start every meal off with him feeding himself.

-I wasn’t rigid about it. It’s been my plan to try for years, way before I ever had kids, but I was pretty chill in that if it wasn’t working out, I wasn’t going to stress us both over it. However, it worked out well since Max didn’t want any puree.

-It does take some patience. It’s true that for a few weeks they may just throw food off of their highchair. But one day, it clicks! 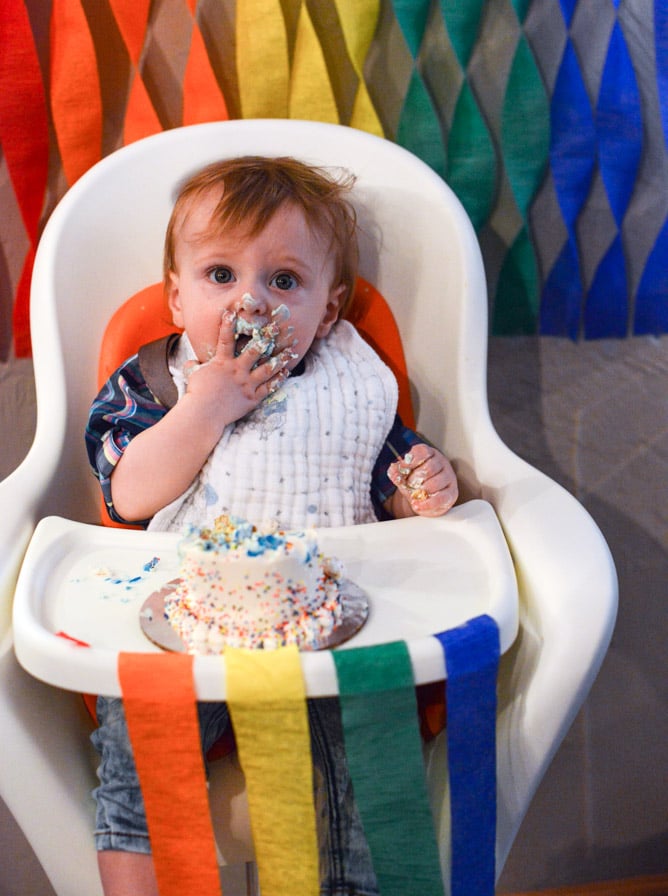 Max does the goofiest face right now, scrunching his nose up and smiling this big toothy grin. It just kills me. I’m also trying hard to get a photo of that, but he’s so quick these days that everything turns out blurry.

Perhaps my favorite thing is that he is just.so.cuddly. He is the biggest cuddlebug ever. He doesn’t seem to be losing his cuddle any time soon. I could just eat him UP.

I won’t be doing these exact monthly updates anymore, but I’m hoping to do something different, even more frequent. Selfishly, I want to keep capturing these moments and may try to do a weekly or biweekly post in the new year. Even if it’s just a photo dump. I am desperately trying to get better with my camera, without feeling like I’m stuck behind it and missing out on things. You know?! HOLD ME TO IT!

And I’ll obviously still be sharing our favorites and stuff – one year baby favorites are going up later this week. I know you guys have also been asking about gift guides for kids, and this might sound ridiculous but I still don’t feel like I have a handle on what kids love yet! I suggest checking out our previous favorites at:

Thank you so much for loving on my little bug this entire YEAR. I adore sharing him with you.