This is a huge day! Because I successfully made macarons without

1. having a myocardial infarction

3. throwing my <insert kitchen appliance here> out the window

and, better yet, they are fantastic. Okay, so the reason I had to go with peppermint bark is because I am downright obsessed with these peppermint bark covered cookies. I have tried the cheaper dupes and NOTHING is as good as these ones. And I desperately want to make them, but I’m afraid they still won’t be as good.

Also, I should add, that this is all Max’s fault. My little snuggabubs the the BEST SHOPPER. Seriously. My mom and I can have marathon shopping days (think six or eight hours) and Max has been coming along since he was born. These days, he is so much more active that he just wants to get out of the stroller and run, and even though we take a bunch of play breaks, by the seventh hour a few weeks ago he wanted to be a wild man. We were in Williams Sonoma and he grabbed a tube of these cookies from in the stroller and proceeded to chew on the can.

I couldn’t NOT buy the cookies after my one year old chewed the can for twenty minutes.

So I coughed up the $25 (eeeeek) and opened them on the spot because we were starving. Serious love at first bite. I like mint with my chocolate, but it wasn’t until this bite that I become obsessed with all things pepperminy barky. It wasn’t that moment that made me try out these macs. I had been planning a peppermint brownie macaron of some sort for the season and started… let’s call it “practicing”… in OCTOBER. That’s one heck of a recipe.

I’ve never made macarons before. It only took me about 436 tries to get a recipe to work too. Stay tuned for 2015 recipe disasters, the macaron version.

Fortunately, I’ve eaten TONS of macarons. I don’t care how trendy they may be. Not only do they taste wonderful, but if you’re a texture freak like me then you straight up lose it over the soft yet slightly crunchy outside and fluffy filling inside. Sidenote: Eddie didn’t think he liked macarons. Who knows why? Probably because he confused them with macarOOns, and since he can’t take the texture of coconut, figured I was trying to trick him.

Um, whyyyyyy would I ever do that.

Anyhoo, when we were in NYC a few months ago he went to Bouchon and said “just give me two of every flavor of macaron that you have.”

Is this man serious?

He had no choice but to get hooked (or waste all the macarons). It would be fitting though that the first macarons I successfully made were ones he wouldn’t touch, since he swears that eating minty chocolate is like having toothpaste for dessert.

Oh well! More for us. 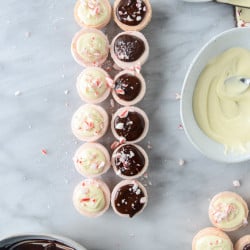 Oh oh! And pink. Because why not?