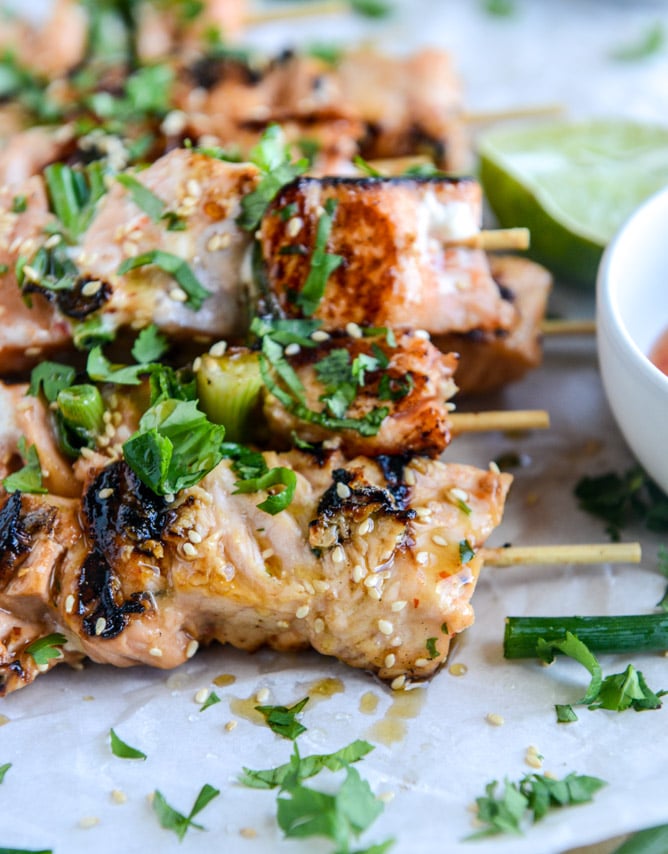 It has been a MINUTE since I’ve shared a salmon recipe here on the site. More like 15ish months, if we’re being all nitty and gritty. August of 2014 was the last time I shared a fresh and delicious salmon recipe – however, last February I did share a crispy crunchy tortilla crusted salmon slider. Which is fabulous and totally counts but I’m not counting it since it wasn’t necessarily classic, oh-hey-I-want-to-eat-a-plate-of-health salmon.

The first week of the new year calls for a plate-of-health salmon, if only to relish in the cliche universe we live in.

When I was busy baking a baby, I had an aversion to pretty much all food – barely had an appetite. Yes it was a travesty. Salmon was one of the last things I wanted to touch, even though everything I saw/read/watched/was told by super helpful, yes-please-give-me-all-your-advice ladies in the grocery store was that I needed to be eating salmon because it was the healthiest thing on earth for the babe. !!!!

Wasn’t feelin’ it though. 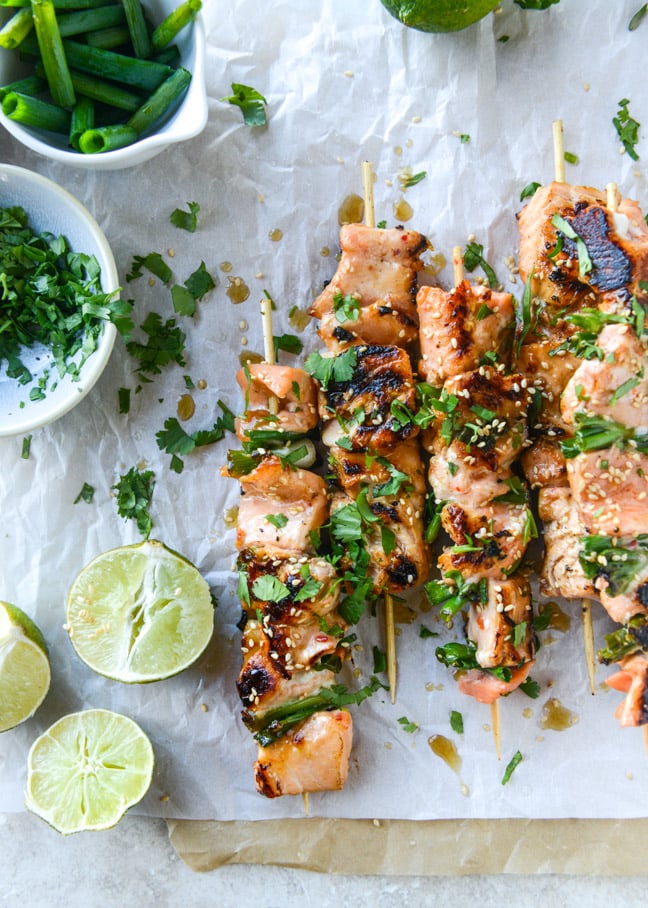 So here’s my thing. I like to buy fresh, wild caught salmon. The wild caught part comes from the internet telling me that’s what I need to do to reap all the health benefits and what not. I get it. I do it.

The fresh part comes from mother lovett convincing me that horrible, terrible, no-good, very bad things grow on meat, fish and vegetables that sit in cases. She used to ask for chipped ham that “wasn’t sitting under that light!” when we went to the grocery store. Aka, slice it, or in this case chip it, fresh, sir. That light in the deli or cheese case? Not a good thing.

No wonder it’s embedded in my brain that food sitting in the case UNDER THE LIGHT is filled with bacteria that will kill me. 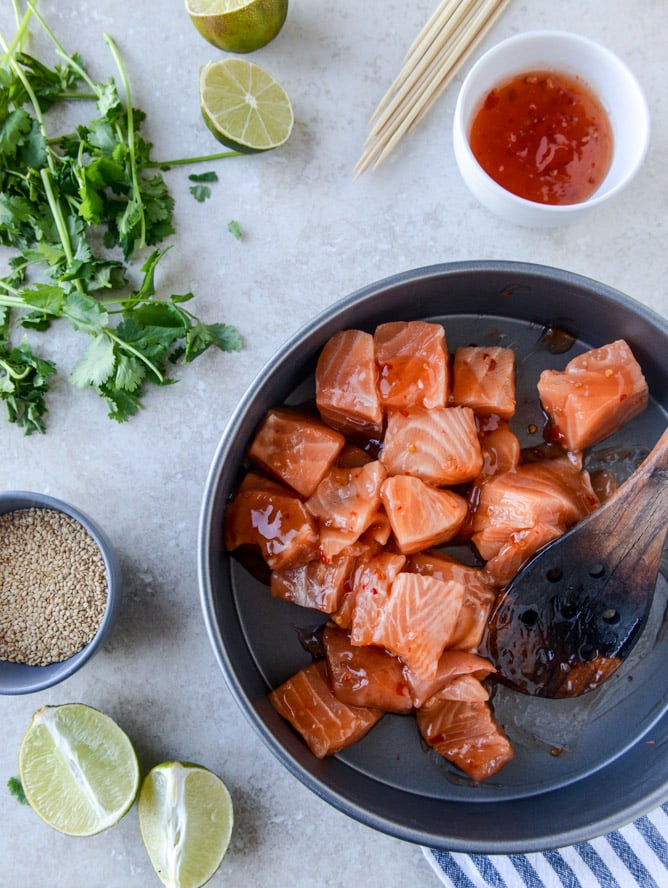 Long story long, my local grocery store (which is NOT Whole Foods) often has a chili salmon that leaves a lot to be desired – just in appearance. Frankly, it looks like it has been sitting under the light, mother lovett style.

That’s where this came from. I haven’t been able to stop thinking of the combo! Plus, it also is similar to my most favorite salmon recipe – this toasted sesame salmon – and that is also your favorite salmon recipe! It’s one of my most popular recipes to date, even though it has set plenty of people’s ovens on fire.

(mother lovett would probably love that since she had a HUGE mental block against her broiler. My mom is still 150% convinced that I’m going to burn the house down when I turn mine on.) 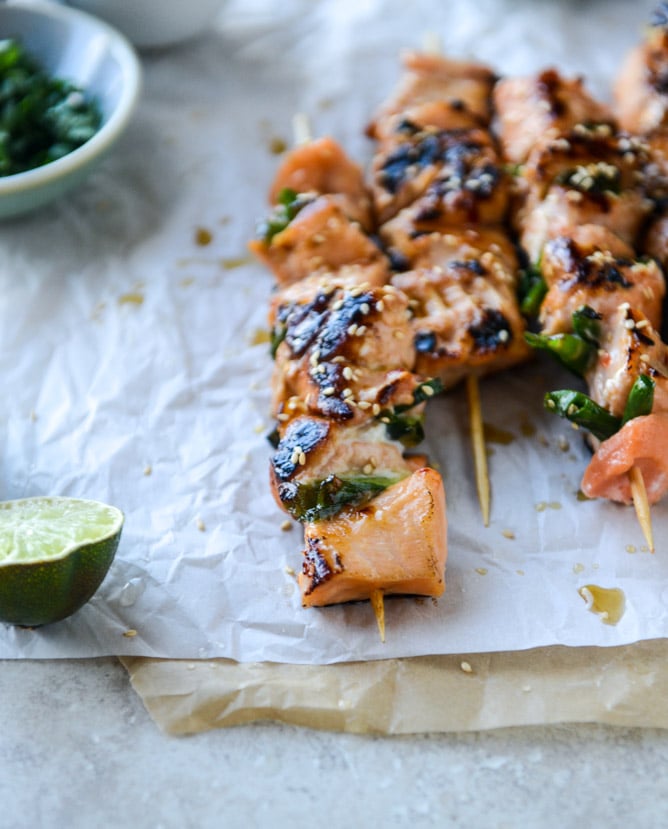 If you love Thai flavors and enjoy salmon (I’m back on the wagon, FYI), these are calling your name, I promise. And they are simple! Especially if you have sweet chili sauce (my favorite is trader joes brand, but you can also use this one), which is a staple in my kitchen. We use it ALL the time. Coat your salmon in that delicious goodness, skewer chunks with scallions (grilled scallions give me life), grill them up and cover with toasted sesame oil, toasted sesame seeds and cilantro. (<hearts to my soapy cilantro haters, you can leave it out.)

They take even LESS than 30 minutes if you’re familiar with the kitchen, but for the sake of not being overly ambitious on this third day of the new year (whaaaat? It’s started MONDAY.), let’s go with the leisurely half hour. And you have time to make rice!

Or a salad. Whomp whomp. 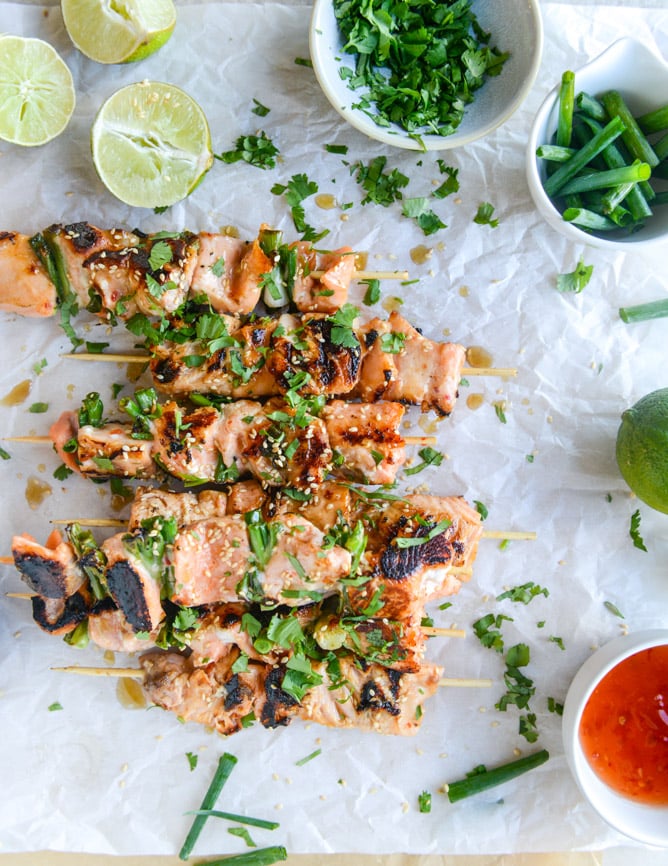 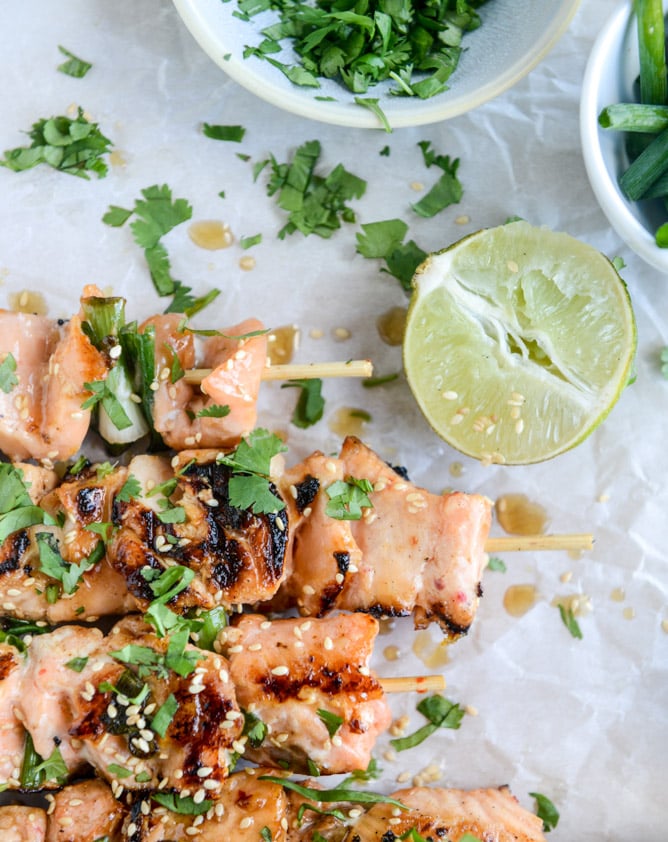