Let’s put breakfast back in the do(ugh)nut. We’ve crossed this threshold where donuts are no longer considered breakfast – they are almost always considered dessert. Right? It’s crazy. Donuts are insanely trashed up today with crunchy bacon bits and glazes galore and cereal on top and half of the donut dunked in two different kinds of ganache. And then there’s even cronuts. It’s 100% ridiculous and obnoxious and I 100% love it. Shocker.

It’s 2016 where donuts are no longer breakfast yet leggings are considered pants. Where nachos are considered dinner and backpacks as purses are back in style. Where I’ve actually considered purchasing a BODYSUIT to wear as a top before hopping in a time machine back to my tween years. It was my intent to put the morning back in the donut here. With yogurt! And granola. And maybe a leeeeeeettle bit of sweetness.

Even if these are still a bit sugary, I love the tang from the yogurt and the crunchy clusters on top. Plus, hello, STOVETOP granola?! This has changed the granola game for me. Bigtime.

Okay, so maybe the weekend morning? We can make this happen, I swear. I’ve discovered the secret to crunchy granola clusters and I believe that it can be found by doing two important things: adding enough “sticky” sweetener and allow the granola to cool completely in one big clump before breaking it apart. I slide it out of the skillet and onto some parchment paper where it stays until it cools.

It’s one big hunk o’ love. Then break it up! Simple as that. So maybe I’m running in the whole “glazes galore” camp but as a yogurt lover, this it too cool. And tastes fab too. 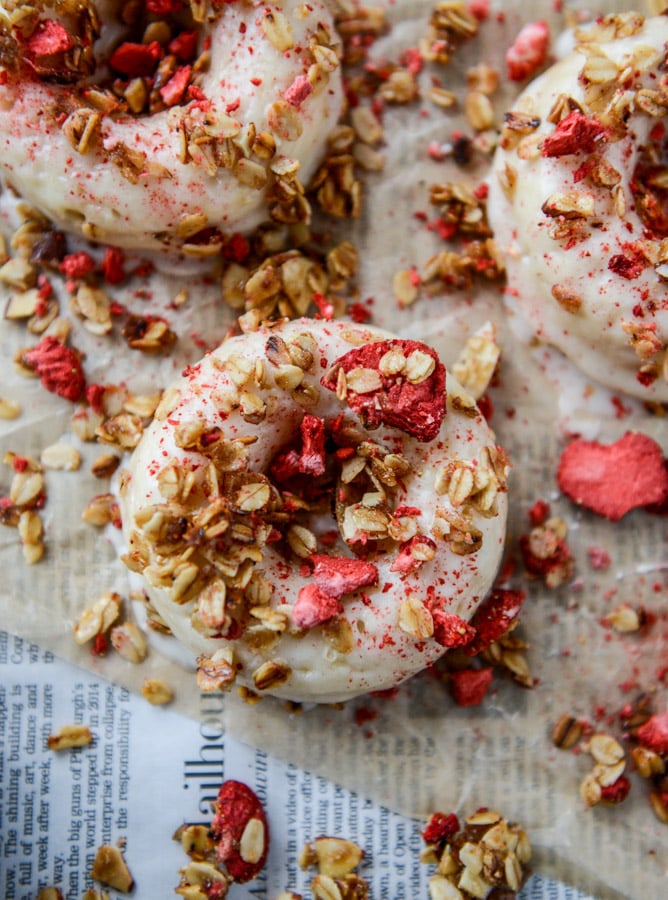 Aren’t they so super cute?

Don’t you just want to a wear a yogurt donut inner tube for a swim this weekend? One more also, in fact it’s an also that you probably already figured out: the texture! Soft and pillowy cake donuts. Sweet glaze and crunchy granola. For someone (me) who was so anti-baked donut for such a long time, I may as well drown in the glaze. Completely fanatical over these. This is the same as eating a yogurt parfait… right?