Can I convince you to chat over a soothing bowl of soup? 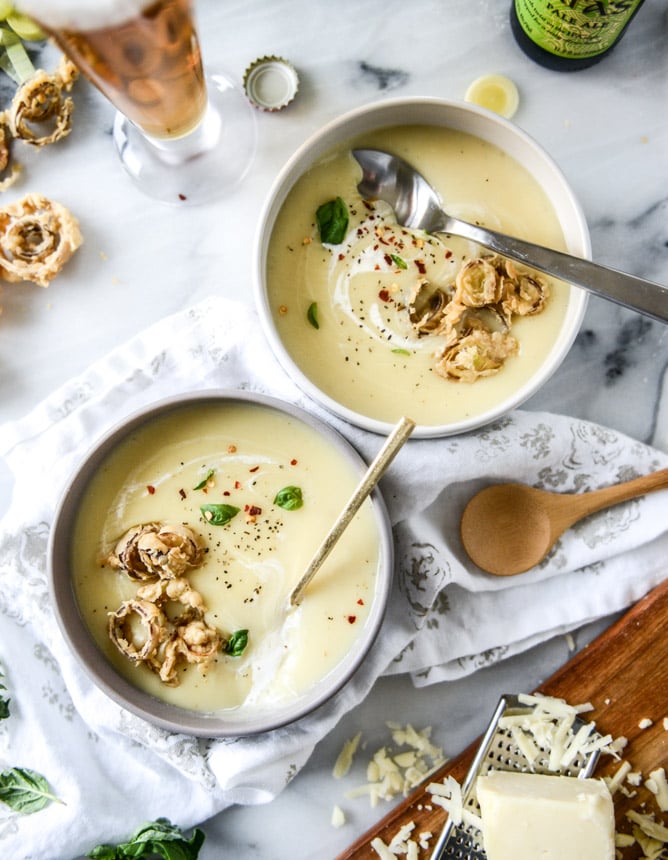 Moments before writing this post, I was having a full scale meltdown about all the things I need to do. Things I want to do, have to do, need to do out of necessity and need to do because I create them for myself, and felt so overwhelmed that I almost retreated to my car to eat a peanut butter stuffed chocolate egg in peace while throwing my own personal pan pity party and take seven deep breaths.

But then. I started peeking at these soup pics and I was like THERE. Right there. I instantly (and oddly) felt at ease, like I was virtually eating my emotions and it was fantastic.

Potato soup was one of those little luxuries when I was growing up, passed on to me by my mom. There were a few other gems that we’d indulge in, like gravy smothered French fries, scrambled eggs and fried ham on a sandwich, mashed potato pancakes fried in bacon grease and hot bacon dressing on spinach salad. All of these delicious dishes – she’d talk about like they were gold (they sort of were…) and we’d MAYBE get them once a year.

This is like that! Except it’s better, because cheese. Potato soup might have been on the menu more than once, but I’m talking about one of those loaded baked potato soups: tons of bacon, tons of sour cream.

I guess this is, in a way, my semi-trashed up Irish version of that. Surprise! 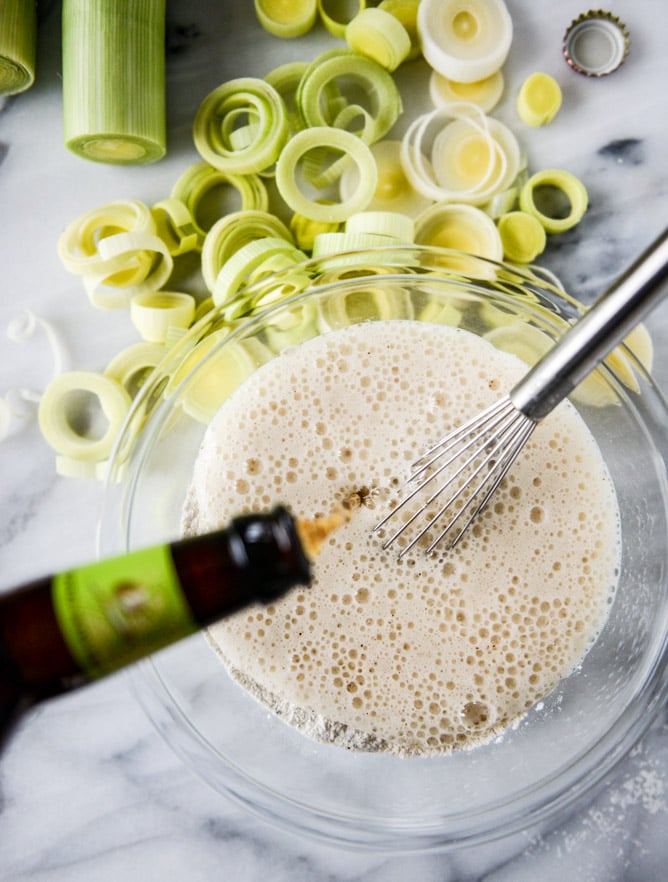 Here’s the thing. We always joke about how ridiculously Irish Max is. Eddie has lots of Irish roots and so do I, but neither of our families cooked any traditional Irish foods or held tons of Irish traditions. Unless you count a large amount of Irish whiskey and frequent appearances at the Saint Patrick’s Day parade?

I want to change this and am actually dyyying to go to Ireland (I wrote about this in my Tuesday Things last year, so I really think we should plan a trip NOW!)… so I just need to bite the bullet. The soup though. The soup!

I covered it in beer battered leeks. They kind of look like calamari, no?  Don’t let ’em freak you out. They are so lightly battered in beer and fried until crunchy that they nearly melt in your mouth. Like fried shallots, but leeks. In adorable little rings. Piled on top of soup.

Can you say a texture lover’s dream?

And I definitely don’t discriminate against soup. I’ll eat it pretty much any time of year, but I think it’s safe to say that what’s regularly viewed as “soup season” is coming to an end. Especially a rich, comforting potato soup.

Hence me sneaking in one more itty bitty recipe here, made with two favorites: beer and cheddar. Guys. I think we need to take stock in Kerrygold. Eddie is a butter snob and basically refuses to use any butter other than their grass fed unsalted. Whenever I can find the reserve cheddar, I end up with an embarrassing amount in my grocery cart. And this is no exaggeration, but it’s also not a shock that I’m frequently self-conscious about the amount of cheese in my cart.

Sometimes I have, like, six blocks of cheese? Thank god for self-checkout. Keeping me from being an adult and having confidence in my decisions since 2005. The beer and the cheese? It’s not a secret that I’m no beer connoisseur. I just cook with what I like to drink. Occasionally I like a dark stout, but usually for drinking ONE frosty glass or making a rich glaze with beef or salmon. And always when the words “double chocolate” are included in the title, even if it doesn’t really taste like the big, fat chocolate bar I’m expecting.

Often, I take the words “double chocolate” quite literally. Hello world, I’d like my actual beer to taste like a cold glass of hot chocolate please.

But that’s why there is no chocolate here, just lots of potatoes and cheese. Swirled together with the lighter ale, topped with the crunchy leeks, a drop of cream, some heat and herbs. I’ll be eating it up until the 17th, thankyouverymuch. Now bring on the Baileys.