It’s the most wonderful time of the year!! Okay,  I know I know. It’s kind of always guac season, surely it is in my brain, but it’s only really guac season here when it’s warm and the margaritas are flowing in the sun. 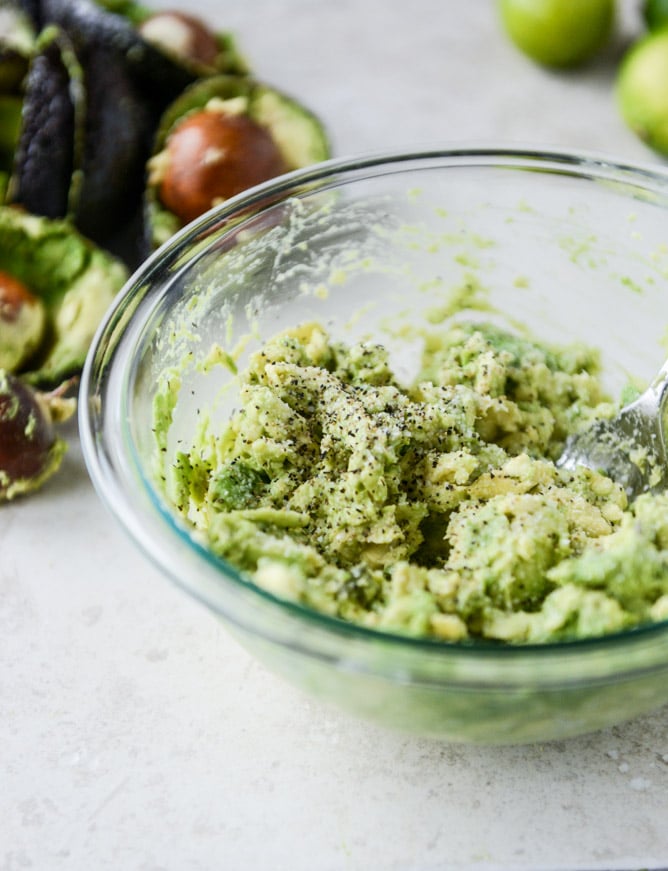 Here’s the thing: I didn’t grow up with guacamole. I rarely even saw it at a party, and if I did? It was stuffed in between that old-school million layer taco dip and was most certainly pre-packaged and already brown.

These days, since I consider myself to be a guac monster, I’m down for putting anything and everything in guac. Like EVERYTHING.

Last year I added caramelized pineapple, bacon and goat cheese. I freaked and thought it would be 100% terrible and instead, it was 342% wonderful.

It’s sort of like having pineapple on your pizza. It’s not the pizza you want every single time, but when you have it, it’s damn good. I’ve gone through stages with my more traditional versions of guacamole. You may remember that my version in Seriously Delish (how sweet house guac, what what) has tomatoes – and I never thought I’d change that recipe. But the fact is that I don’t really loooooove tomatoes – unless they’re roasted! Or unless they are covered in balsamic with burrata piled on top. Or unless they are smashed on top of aforementioned pizza.

So for the last year or so, I’ve made guac sans tomatoes. No way, no how. Just basic with lime, cilantro, diced onion and jalapeno. With lotsssss of salt. Sometimes garlic. But then, I thought of the roasted tomatoes. They are a huge staple in the summer for us, no matter how hot it gets. I’ll turn on the oven to roast these babies or even pop them in a hot skillet to burst with some garlic and olive oil. They find their way into salads and pastas and popped on toast.

It was only natural that they would get swirled into my guacamole, right next to some charred lime. And you know how delicate and juicy the roasted tomatoes become? It’s almost like a super fresh sauce swirled into the dip and combined with crumbled queso fresco, the texture and flavor is out.of.this.world. You don’t even want to know how many times in the last month this has been my lunch. 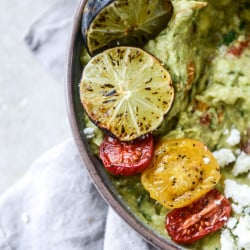 Now please give me 32 tacos!