I know I sound like such a broken record but I HAVE NO IDEA HOW THIS BABE IS 21 MONTHS. Eeeep. Spoiler alert: I still want to eat him up.

So, I don’t think it’s any secret that I’ve really loved every stage with Max. But more than once in the last few months, Eddie and I have both said how much we absolutely adore this age so much. It’s so much fun watching Max get excited about things he loves, learn new things, repeat every single thing we say, heck he even speak in full sentences most of the time. I had no idea what to expect at this age but he is just such a little person. I love it.

The sweetest thing is watching him with Eddie. He loves dada so much and it’s the most adorable thing I’ve ever seen. He gets SO excited when Eddie comes home from work. It’s seriously heart melting. I always thought it was suuuuper annoying before I had a kid that everyone went by “months” for ages, but I now understand why. Just saying that Max is one year old is such a broad statement and he is incredibly different at this age than he was at 18 months!

One thing that just boggles my mind is how much he talks and how well he talks. He understands everything and he often says words that I haven’t said for days. I guess I am just really surprised at this because he doesn’t have tons of interaction with other kids at the moment (not daily interaction or anything) since he doesn’t have siblings. But maybe that’s because I’ve basically talked to him like an adult since he was born… ha? I actually find myself so annoying when we are out because I talk to him the.entire.time. Like at the grocery store, at the mall, running every errand imaginable – he knows exactly what we’re doing.

His favorite place is Target, so there’s that. My favorite thing that he has been doing for the last month is pointing out people’s possessions. Or what he *thinks* are their possessions. For instance, he always points to my water bottle and says “that’s a mama’s!” and one day he dragged a protein pancake box out of the pantry and yelled “that’s a dada’s!” I just die. It is my absolute favorite thing and I never want him to stop. And I never want to forget it. He does it with EVERYTHING and his little voice is a dream.

Max is still a pretty decent eater. Last time I wrote an update, I shared that I was afraid he had started to head into some toddler pickiness. I learned about a week later that the rest of his teeth were coming in and I think that pickiness was mostly due to teething because he went back to eating normally – or normally for us, anyway.

Now, I mean, don’t get me wrong, he is still picky over certain things (he’s been obsessed with meatballs since he was six months old and last night he threw every piece on the floor without tasting them), but in general he still eats pretty well! And he eats everything – but lately he’s been tossing the broccoli off the chair too. I am still giving him everything we eat, within reason of course.

He loves yogurt and eats yogurt every morning for breakfast, alone with some peanut butter toast and maybe banana. He ate eggs every morning for months but is over them for the moment. Lunch might be leftovers from dinner, some sort of sandwich (almond butter + jelly/grilled cheese + veg or pickles/etc), whatever fruit and veggies we have on hand, some crackers or cracker-like breadsticks, string cheese or a combo like that.

I make so many recipes that it really depends and varies every single day!

One snack he still absolutely loves are any kind of cereal bars. Right now we are loving the Happy Tot Fiber + Protein bars, and he still looooooves the Plum Organics Mighty 4 Bars. Like it’s not rare for him to ask for three or four a day, so it’s a constant battle to keep them out of his eyesight and find real food in that moment! 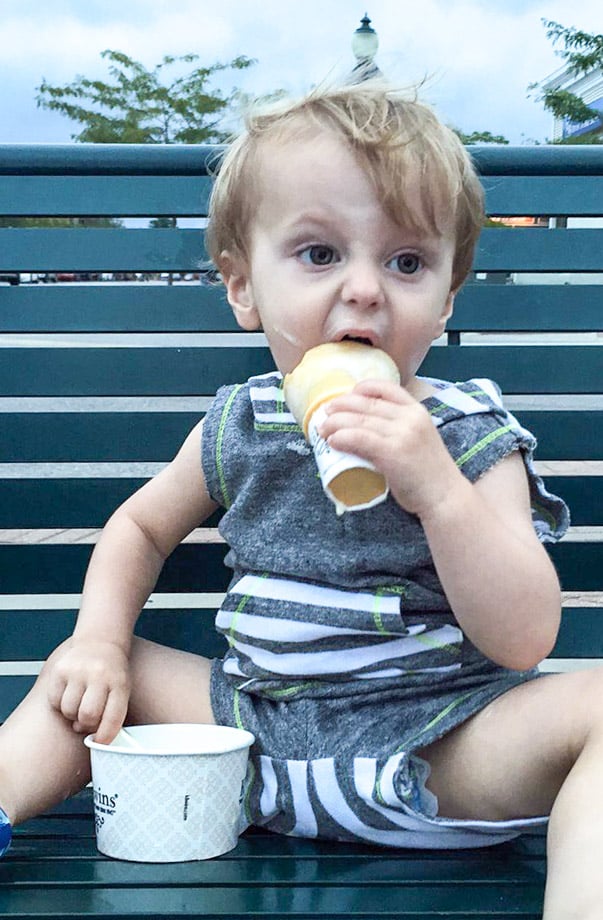 Welp, Max fiiiinally slept through the night at 20 months old and it was on our first night of vacation. I think he was completely wiped from running around all day and being outside in the sun for such an extended period of time, plus a relaxed nap schedule. He slept from about 7:30 to 4:30 which was amazing and unreal.

Since then, he has done it a few more times but as I write this, last night he was awake from 2AM to 5AM. It was kind of hilarious because he kept screaming that he wanted “mama to put on her glasses.” Like, what? Ha!

I’m still nursing him and have moments of realizing that it’s almost over, and get so freaking sad. It’s been such a wonderful experience for us and I feel really lucky and thankful about that. I only nurse him maybe around twice a day – always in the morning and then either in the afternoon or in the evening before bed. Eddie does bedtime often, so sometimes I’ll nurse Max in the late afternoon and then not again until the morning. I can already tell that the morning will be really hard for him to give up.

Max is still wild about any and every type of car, truck, tractor, bus or van. The amount of small cars I step on daily is horrifying. He loves books, all wooden blocks and anything he can push or pull. He climbs unlike any toddler I have ever seen. Seriously, it is to a point that is dangerous. We have a very high bar in the kitchen and he can climb UP the bar stools and on to the actual bar. He is a lunatic.

His favorite thing to do is be outside – it doesn’t matter what we are doing, he just loves to be OUT! It’s a nightmare to get him in the house and it’s when he throws the biggest fits. He absolutely loooooves to swim and splash in water. He loves to pick up rocks and he can point out every bug crawling on the driveway.

P.S. you can find our 18 month favorites here… we are still loving everything in that post. I considered doing one at 21 months but don’t have many new-to-us items, so the next one will probably be 2 years. WAH! I already miss every other day that I’ve had with him. I miss every day as it passes. Does that sound insane? Much like I wrote about in the beginning, I am literally soaking up every single minute I have with him, as much as I can. I appreciate it and intentionally LIVE those moments yet they still go way too fast and I still feel like I’m missing something. I already miss every stage and day, even the hard ones! I find myself nostalgic over the most ridiculous things.

On the days where it feels like I just can’t tackle everything (even though every single day I swear that I can!) I need to do, I really just try to remind myself that this stage is still so short and it will pass. I mean, I think I can give up a few work commitments because in two (maybe even one?!) years he will be going to school and in five years he will be in school all day and not here with me – all day. When I think about that, it blows my mind – like I can’t actually fathom him not being here with me all day. I can’t even imagine it! That brings me back down to earth and makes me realize what I need to focus on daily.

Although, yes, of course sometimes I throw us both in the car just so I can sit… in a seat… by myself… and drink coffee. AH. I just feel so freaking lucky to have him. He has saved me more than I can even express in the last 21 months. He is the best babe! xoxo