[this post is in partnership with Harry and David. I’m creating some wonderful recipes with their royal riviera pears this season, starting with pear cider and I can’t wait for you guys to see what I’ve come up with! xoxo] 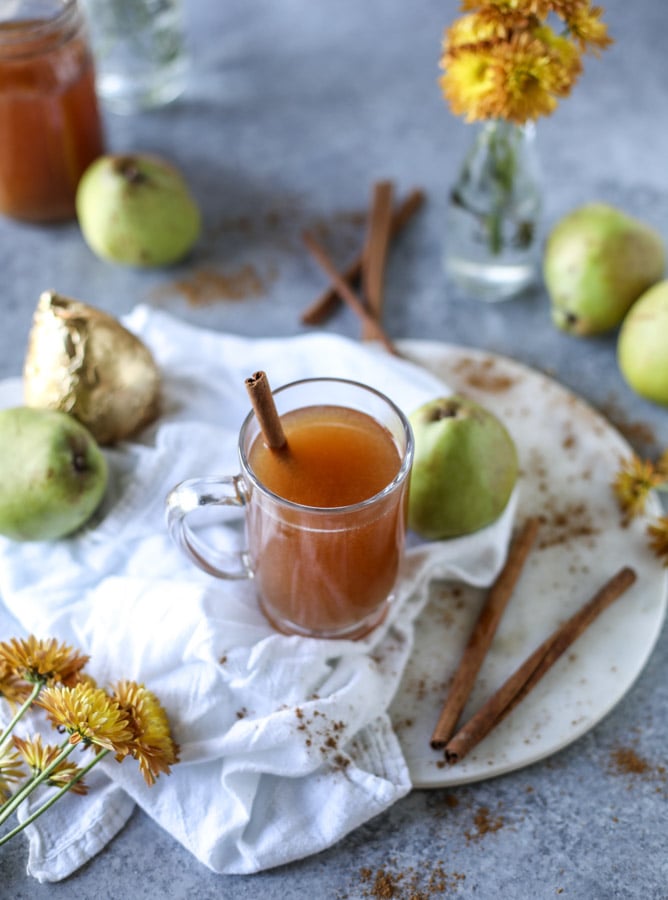 I have the best best best warm and comforting drink that will keep your soul cozy this month. I might be slightly shifting my love of apples to pears (I mean, they ARE such an underrated fruit this time of year) right now in most predictable Jessica fashion, but I don’t hate it.

In fact, freaking out priorities may be shifting to pear cider over apple cider. WHAT. I could not be more excited to develop some recipes for Harry and David this holiday season using their incredible pears. You might remember a few years ago when I went to the Harry and David headquarters and it still ranks up there as one of the best trips I’ve ever taken. To say I’m absolutely enamored with their pears would be a serious understatement.

It’s a nostalgic thing for me, of course. (um, hi, what isn’t?!) When I was a kid, my dad would usually get a box of pears or two from people he worked with as a holiday gift. And I remember the first time I had a GOOD pear. You know? Juicy, sweet, not mealy whatsoever? I fell in love. From that moment, my brothers and I basically fought over the fruit that would come each December. As the first born crazy person, I’d plot so I could get the gold wrapped one. It was all that mattered to my tween self. And that was BEFORE instagram existed. So naturally, I knew that the first thing I had to make was pear cider because… up until making this, I had never even tasted homemade pear cider before!

New infatuation. Here I am. Hello. First, lets talk about how AMAZING our entire house smelled the day that I made this. I love to make homemade simmering spices during the winter but this was, like, ten times better because we actually got to consume the deliciousness after it simmered on the stove all day.

Second, it was out of this world incredible. We’re talking four words: In. Cred. I. Ble. That’s necessary. This was my first thought after tasting the cider: it tastes like winter. WINTER!  Which I absolutely loved, and here is why.

I’m a seasons freak. I love the shift of spring to summer to fall to winter. I could never live somewhere that didn’t have all four seasons – all four seasons dramatically, that is. I love to eat seasonally and enjoy every moment of what each season brings. And to me, apple cider tastes like fall. It tastes like October. Like bonfires and pumpkin patches and hayrides and days that still might reach 80 degrees. It’s fantastic, but it’s all crunchy leaves and pumpkin spice-like. The pear cider? It reminds me of those moments from Thanksgiving to Christmas. Maybe it’s the cloves or the allspice. Maybe it’s simply the pears. It’s just different enough that it screams Thanksgiving turkey turned into snow and Christmas presents and twinkling lights. It’s warming and spicy but sweet. Hot or cold, turned into syrup, thrown in a cake – it’s a familiar enough taste that you’ll feel super cozy, but has that slight hint of… “these are pears!” And booooy do I love pears. Give me a cup of this and turn on Love Actually and I’m SET.