That stuff totally cancels out the bacon, doesn’t it? It does. Because I said so.

Last year at this time, I didn’t even think that I liked quiche.

This year, it’s allllllll I can think about. I’m growing up! I’m am obsessively obsessing over the quiche idea for breakfast, lunch and dinner around the holidays. Mini quiches, quiche bars, quiche tarts – you name it, it’s in my plans. Such serious comfort food that you can trash up incessantly.

This has my name all over it. These spiralized sweet potatoes practically MELT in your mouth. It’s insane. See those little swirls up there in that slice? They aren’t mushy but they aren’t crunchy either. It’s like they are perfectly al dente when quickly tossed in some bacon grease. (Oh yeah sorry I did that too.) The kale is garlicky and delicious. I love kale with eggs and omelets, as long as it’s chopped into small pieces. I did the same here for the quiche and its perfection. Plus, I swear that the inclusion of kale here deems this quiche a Christmas superfood. It only makes sense. The crunchy bacon is obviously fantastic but what’s even better is the havarti cheese. If you have a copy of Seriously Delish, then you know that I have a frittata in the book made with queso cheese sauce. I planned on doing the same here! I wanted to make a quiche with queso (I mean how often do you get a recipe with two Q’s? oh hi alliteration lovers.) but as I was developing this recipe, things got a little out of hand.

We were already crisping up the bacon, spiralizing sweet potatoes AND chopping and quickly cooking kale. It was becoming too much work, even for me who is always in the kitchen. So I swapped my queso idea for one of the meltiest cheeses I know: Havarti. And guess what? The freaking Havarti almost acts like queso! It’s so thick and melty and gooey and delicious. I was afraid my eggs were undercooked but oh no – it was just a large pocket of cheesy goodness. Also, my quiche looks so desperate and sad for a nice crust because I threw it in a springform pan. My tart pan that I usually use was already filled with something delicious, so I was almost out of luck. I didn’t want to use a pie dish because I wanted to remove the quiche in one piece, so springform it was.

I actually loved the raised crust! It wasn’t the prettiest but I crumbled the extra crust on TOP of the quiche and oh my word was it perfect. Extra crunch and that buttery flakiness? I die. If you want to see how I make a quiche in my traditional tart pan, check out last year’s roasted broccolini and bacon quiche. Is this becoming an annual holiday thing? I think so. Never hold the bacon. 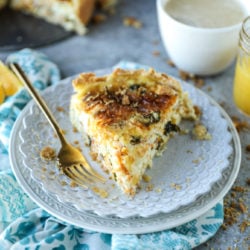