Put a milkshake on the menu for dinner tonight! I reeeeeallllly wanted to make some sort of super luxurious chocolate shake for Valentine’s day purposes, because the holiday just makes me think of deep, dark cocoa desserts. And if it’s not going to be a brownie or cake, shakes it is. They are just so easy. Obviously. Who doesn’t want dessert in 5 minutes?! With all of the recipe development going on for the book, we’ve barely been eating out at all. Maybe once a week, even once every two weeks, because we have so much delicious food at home. And weirdly enough I’ve been on a burger + homemade fry + milkshake kick (which started when I was testing a bunch of different burgers) and they are tasting so GOOD at home. I’m never one to order a shake when we grab burgers our, but something about making them at home with a great burger and fries? YES.

I loooove that idea for Valentine’s Day. Take that, filet and blue cheese sauce! Also. I have to tell you about my favorite fairly recent Valentine’s day memory!

A year after Eddie and I started dating, I woke up on Valentine’s day morning to go to the gym. It was 5am and snowing like crazy and my car slid sideways down the hill from our house, sort of getting stuck in someone’s yard. FUN. Since he was also on his way to the gym, I called him to come help me as I sat there crying like a baby not knowing what to do. (Really, I could have got myself out of this situation. I’m sure.)

Once the situation was remedied, we both ended up not going to work because there was a TON of snow (like feet! feet of snow! why haven’t we had any this year?! crossing my fingers for today.) – and we made this huge breakfast back at his apartment. Like a big, spur of the moment, weekday breakfast. It was so fun! Also. This story is not interesting. You had to be there, right?

The only downside is that I think we used turkey bacon. Ugh. Turkey bacon. Way to ruin the romance. 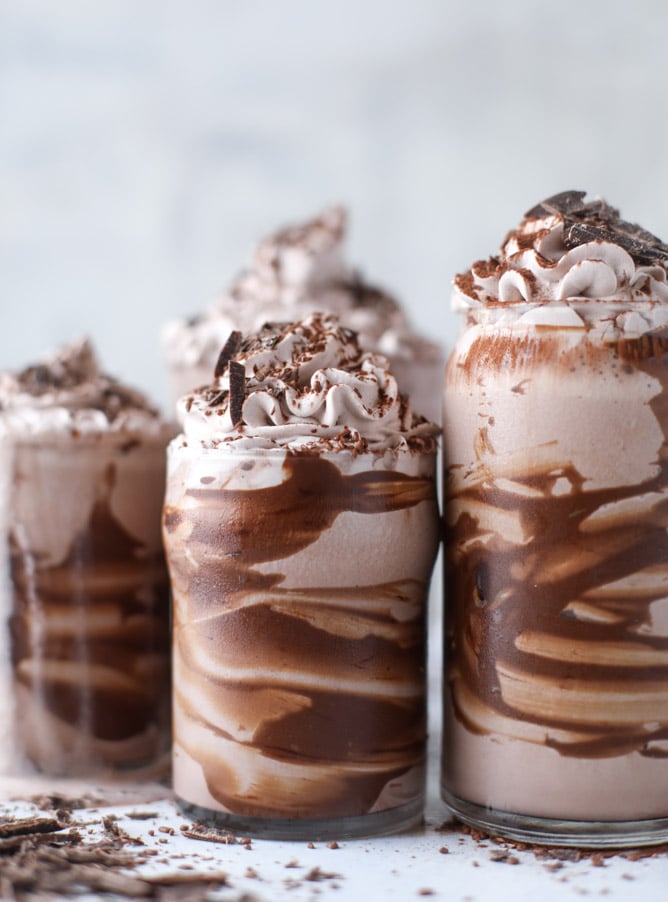 Anyhoo, we did NOT have chocolate shakes like this that day, but we should have. This year, I will probably make a bunch of cliche fun heart-shaped food for Max (I’ve turned into such a sucker) and I’m 99% sure I’m doing the burger night for Eddie. Very obnoxious milkshakes included! Maybe some chocolate covered pretzels on top. I can’t tell Eddie about the sea salt because he will freak.

Me on the other hand? Give me all the salty chocolate.