If I can convince you to make one dessert for (yourself on?) Valentine’s Day, this shall be it! These are so rich and decadent and guess what? They only make a tiny serving! Just for you! And me. Of course. These beer brownies come from Christina’s newest book Sweet & Simple: Desserts For Two which is out now, just in time for your sweet teeth to crave some super chocolately deliciousness. Christina makes all the best desserts in batches to serve two people. Two! Isn’t that amazing?

I’ve probably mentioned it a million times but really, the only person I know who can bake a 9×13 pan of brownies and not consume it like a pyscho is my mom. She can make a large serving of ANY dessert, have it sit in eyesight on her counter in the kitchen and enjoy one single serving every single day and no more. Absolutely NO more. Not even a crumb.

I fall somewhere in the middle of that and omggivemeallthesugar. Since I technically cook for my job and have a lot of food in my house at once, I have a certain level of discipline when it comes to dessert. Bake a pan of brownies. Cut myself one pretty square of fudgy brownie after lunch.

Eat it. Enjoy it. Not like “enjoy it” by sitting down and savoring every bite, but more like “enjoy it” while standing over the sink and simultaneously scrolling through Instagram on my phone.

I’ll take one more forkful. I mean, I don’t need a whole piece. I’m pretty satisfied and a whole second brownie will send me over the sugar edge. But a forkful? Yeah. I can do that.

I mean, maybe a second forkful.

Seven hours later dinner is over and there are 13 forkfuls of brownie taken directly out of the pan. BUT I NEVER ATE A WHOLE BROWNIE! Do you relate? Or would you and my mom be besties? That’s why I have always been obsessed with Christina’s concept of desserts for two. Two! Probably also since until fairly recently I was only part of a family of two, and those desserts were perfect for Sunday night dinner and the link. Small batch sugar cookies? Yes please! Little cheesecakes? Hello lover. So. Guess how we start out making these beer brownies? By making a beer syrup.

Christina calls it a beer concentrate and it happens by boiling beer down until it’s, well… concentrated. Yes yes. I sort of just wanted to slurp it off of a spoon. The beer syrup gets mixed into the brownie batter. It gives the best hint of flavor EVER. A tiny bit also gets whipped into the buttercream and now isn’t that just the best thing you’ve ever heard of in your little life? Sugar plus butter plus BEER. 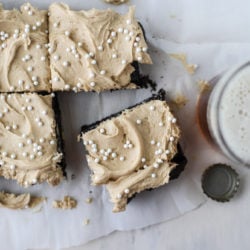 These are the fudgiest things in life.