[this post is in partnership with my favorites, DeLallo Foods! I’m created some delicious recipes and videos that you’ll see over the next few months. xo]

I’ve got your dinner tonight! I’m barely embarrassed to tell you what a huge pizza mood we’ve been in recently. I’m nearly positive that on my end? It comes from the huge amount of different recipes we are shooting each day – meaning tons of different flavors, some recipes that compliment each other, some recipes that do not, but must be shot in one day – and when you have all that food going on, you just want something comforting and traditional.

Something “normal” as Eddie calls it.

On his end, he would eat pizza for lunch and dinner if he could. Every darn day. I don’t even know if I’d complain. I cannot explain how much we love the DeLallo pizza dough. It is so freaking good.

We’ve been eating it for ages now (thanks mostly to Eddie, who started making it once a week last year) but especially lately, in these last few weeks as I’ve been shooting a plethora of those random recipes for the book, we’ve heavily relied on it.

It comes with the yeast packet and all you have to do is add water and let it rise. Sometimes I’ve even thrown some dried herbs and parmesan into the dough. It’s so customizable. And easy, especially for Eddie, who isn’t used to making my own dough recipe ten million times. Just look at that fluffy heap of love! So stretchy and silky, just how I like it. Kneading that kind of dough is one of the best feelings in the world. Right?! Okay, BUT! My favorite part of this pizza?! The one that can’t be ignored? Eeeeep. These truffled mushrooms.

GUYS. I can’t even explain the flavor here.

And here’s the thing: up until last summer, you wouldn’t have caught me dead eating any sort of canned or jarred mushrooms. I just told you how long it took me to get into mushrooms in the first place and the idea of canned ones always majorly freaked me out. Last summer, I was walking through the DeLallo’s store just grabbing a couple things for dinner and spied these on the shelf. They were brand new and I was intrigued and I bought three jars and then snapped a picture to all my foodie freak friends. I was terrifically excited.

Pizza was first. It was the obvious choice. We made pizza after pizza with these last year and fell madly in love. The next thing I did was an omelet. Whoa whoa whoa. Equally as fantastic. Since then, I’ve put these on quick flatbreads and french breads and even did a quiche with them over Christmas. If you still love truffle flavor like it’s going out of style, you will dieeee over these babies.

I made a pepperoni + bacon version here because it’s Eddie’s absolute FAVE. What I love to do the most though is fry the bacon, then sauté some fresh spinach in the bacon fat until it wilts. That goes on the pizza with lots of garlic. Check out the video for a peek at that recipe. It’s a flavor bomb over and over. 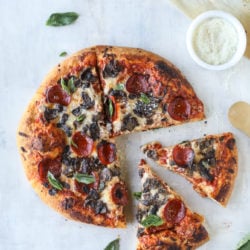 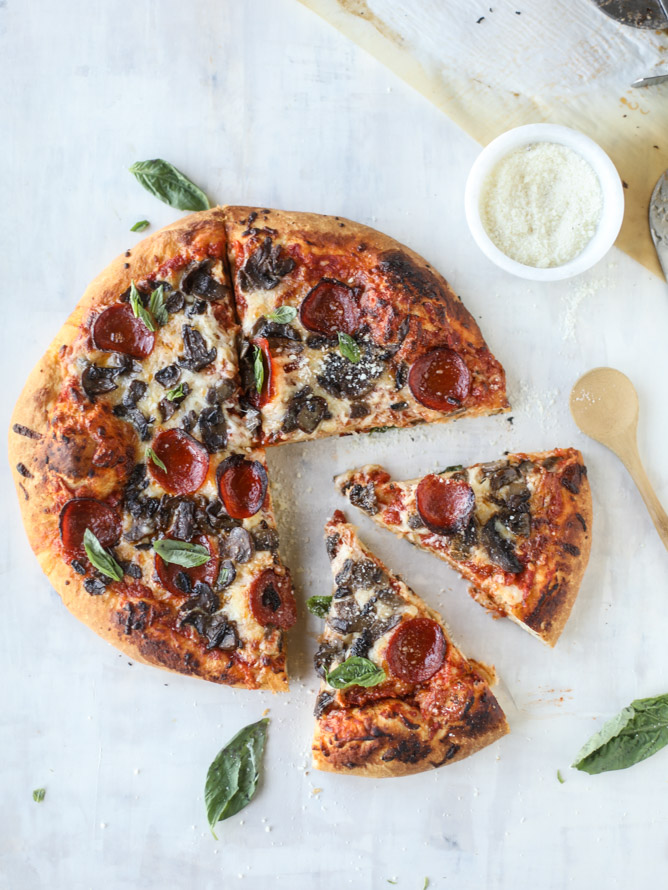 Would it be weird to frame this pizza art in my kitchen?!