How thirsty is your Thursday? 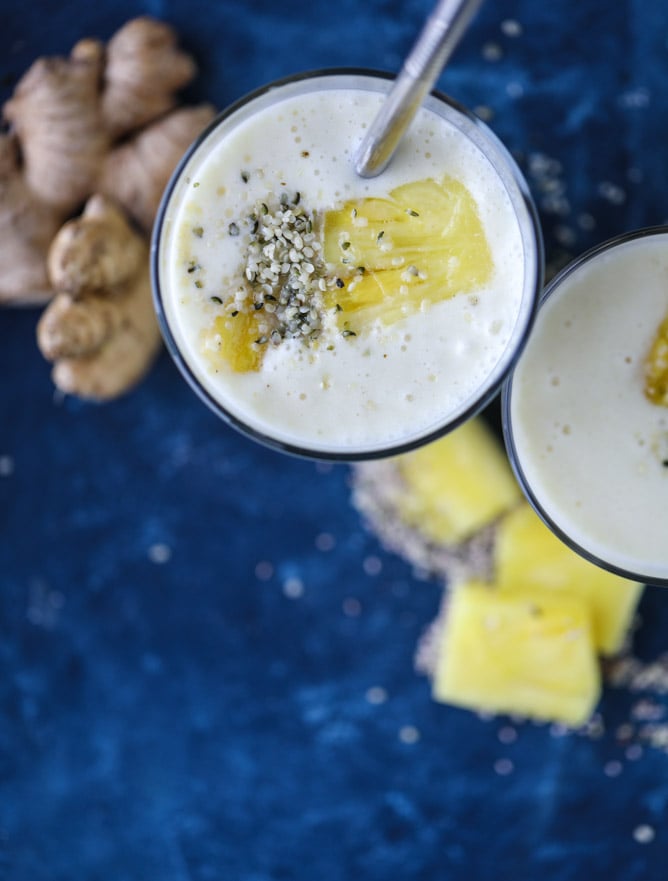 We’re taking a slight break from our cocktails this week so I can tell you about one of the smoothies I am living and dying over today. If I’m not making a pitaya smoothie every day, I’m making this one! It’s pretty and golden and tastes like sunshine. Or so I pretend. Even though last night it went down to 14 degrees (WHAT?), we are in full blown smoothie mode here. Max doesn’t want to touch a vegetable at the moment (um, where did he get that gene?) so making a smoothie each day is how I assure he is at least getting SOME sort of veg in his diet.

Eddie is still making his smoothie each morning too and would you believe that our Vitamix actually BROKE the other day? It just stopped working. I wanted to cry.

All those shoes I could have bought with that money. Well, I’ve been on such a ginger kick lately. It’s not always my favorite flavor (though I won’t kick a piece of candied ginger out of bed… it’s so good) but a few weeks ago, I had a pineapple ginger juice that was UNREAL. Oh my gosh. It was to die for. I initially got it because I thought I was getting sick and wanted to kick the cold to the curb before it began. Lately I’ve been doing a lot of the raw garlic and ginger trick which has seemed to work, especially used in conjunction with apple cider vinegar, which you guys know I think is the best thing on earth.

Seriously, I swear it’s the cure for all things. But anyway! While this smoothie doesn’t have any green, I haven’t been minding because the flavor is so good. It’s creamy from the coconut but still frosty and milkshake-like from the frozen pineapple. We basically keep a frozen fruit tree in our freezer because we make smoothie packs every week and like variety. My two go-to fruits are peaches and cherries (ahhh so good) but I always look some good pineapple chunks.

This here has a little zing from the ginger but it’s still sweet from the pineapple, which of course I loooooove. And Max loves too. I don’t know if he has had an actual milkshake yet, but he thinks that these are milkshakes. The day that boy has his first hot fudge milkshake… oh my.

Also! This sort of reminded me of my caramelized pineapple lassi, which is such a throwback. I was drinking those as I finished photography for my first book and it’s like I get in a pineapple smoothie mood every time I finish up a book. Or something. I mean, I don’t think a drop of coconut rum would be HORRIBLE in it either…