Hiiiiiiiii. TELL ME SOMETHING. How are we over halfway through June? Like almost at July? I don’t even understand this in my stereotypical cliché world and I need time to slow down just a little bit.

ENTER this no-bake cheesecake triple berry star tart (!!!!) with fireworks vibes. Because we need to be festive and all since the 4th of July is a mere week away. Fireworks, BBQs, pool parties and MARGARITAS.

Those have nothing to do with this so I regress. Aside from my sad attempt at a berry star, this tart is SO delicious if you love cheesecake. It’s simple, only has a few ingredients and is a huge hit at parties.

The crust and base for this tart comes from all of my no-bake cheesecake recipes. And it’s SO freaking easy! The cheesecake layer is simply cream cheese, sweetened condensed milk and vanilla extract. Three super basic ingredients whipped up to make the silkiest filling EVER.

And you all know how I live for graham cracker crust. I will gladly eat the crust without the filling if I’m forced to. Or, err…. Not even asked to. It’s SO good. Just love a graham crust! With the crust ingredients, that brings us to an easy five ingredients for the base of the cheesecake. It is embarrassingly simple. Horrifyingly. Humiliatingly. 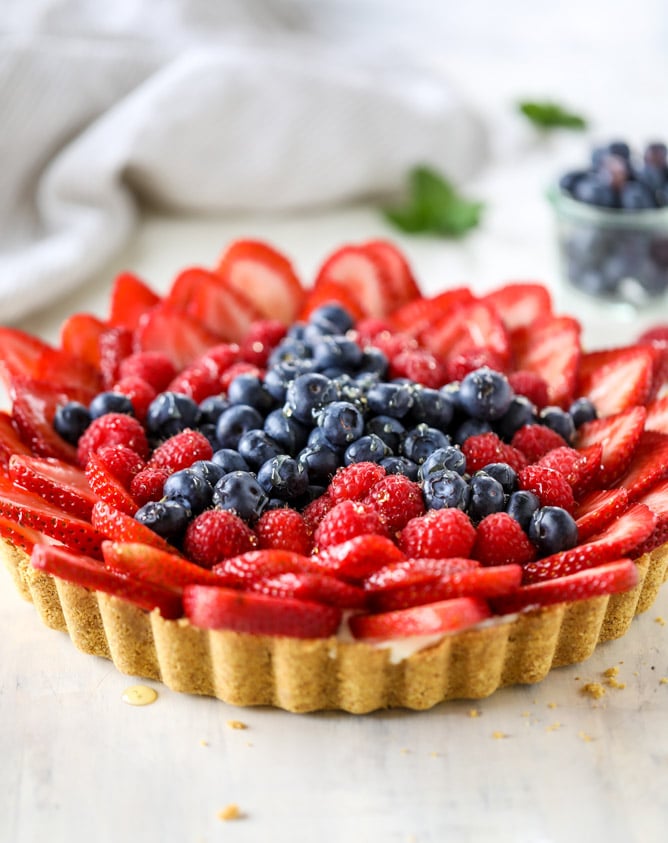 Then, the berries! I used this tart from Martha as inspiration for my blueberry star and let’s just say it isn’t quite as easy as it looks. It definitely isn’t as Martha-perfect as it should be. But the three berry variations with the plain vanilla cheesecake are such a classic.

And they taste like SUMMER. The peak of hot summer days. ALSO. Even better news. You can totally make this ahead of time because it has to set up anyway, especially since it’s no-bake. It will be a little creamier than your regular old baked cheesecake, but it should still hold up great. Just place the berries on right before serving and you’re good to GO. So tell me allll the plans you have for the 4th and allll the things you intend on making! Or eating! Or drinking! And drink one for me. This just makes me giddy!

« Previous PostCurrently Crushing On. (and 10 Recipes for the 4th of July!)
Next Post » Tuesday Things.