I’m having a toast problem. I will seriously put ANYthing on a piece of toast. It is getting ridiculous.

But! I have good reasoning.

Just look at this grainy, seedy bread! Would you want to throw everything on top of it too? Whipped ricotta is not a new thing for me on toast – you know this! – but with roasted, caramely pineapple? Ooooooh. It’s (embarrassingly) the bomb.

Given my insane fruit obsession, pineapple ranks up there. There aren’t many fruits that I won’t eat by the bowl full. I love most fruits when they are roasted or grilled too, and pineapple is no exception. Especially with the freshness of the mint! And the creaminess of the ricotta. And the crunchiness of the toast.

My texture brain goes into overload. There aren’t many people who would consider this a meal (um, hi, my husband?), and maybe I wouldn’t either. It probably wouldn’t be lunch, but it’s a perfect breakfast. Or a perfect snack for the time when you need a little something extra but don’t want to feel weighed down. Better than just a cookie, you know?

It’s this balance of savory and sweet that just gets me every.single.time. Also, let’s revisit the toast issue. How do you like your toast? Toasted to oblivion? Warm bread that masquerades as toast but is really not? I’m still on the super dark and golden, very extra crunchy toast train. Eddie is still very much on the warm bread train.

Sometimes he makes me breakfast and “toasts” the bread to have with eggs and it’s soft with not a golden hue in sight.

I need there to be CRUNCH, people! Not only could this be breakfast or a snack, I’m fairly obsessed with the idea of serving it on tiny crostini as an appetizer at a party. How freaking cute would that be? And let’s just get this out of the way: Eddie would nevvvvvver eat this. It’s totally not his thing. Not his taste buds. Not his palate. He’d maaaaybe eat it if the pineapple was in jam form, if that could be a thing. Wait! Is that a thing? Can caramelized pineapple jam happen? It should. A drizzle of honey and a few sprinkles of sea salt take this over the top. It’s rather filling too – I mean, more filling than you would expect. It’s better than eating a brownie though, right? RIGHT?! 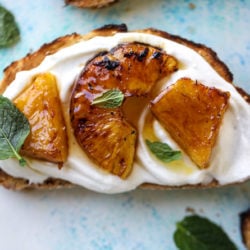 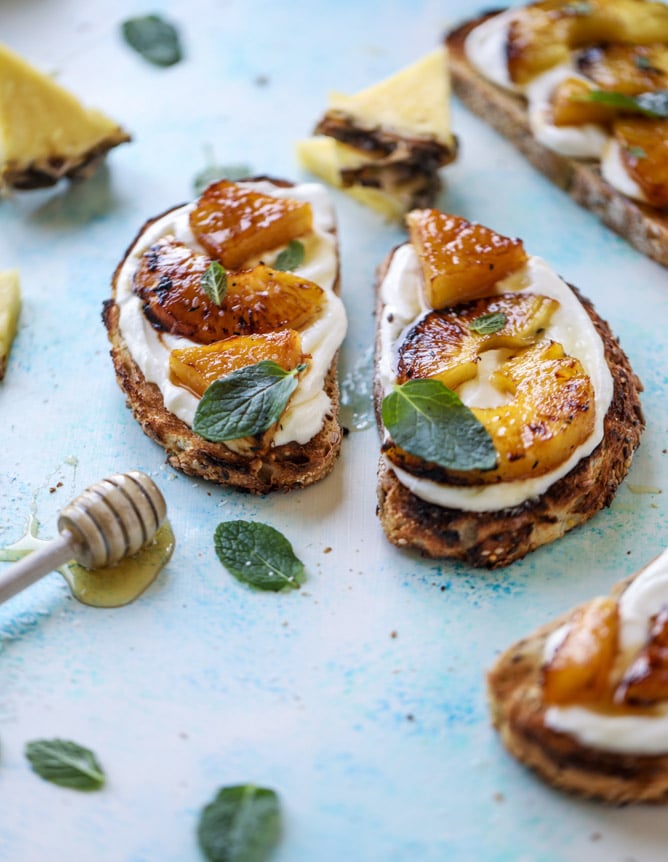