Hello hello! In the heat of the summer we’re needing something fresh to cool off, I’m sure of it. This is everything I want to be eating right now, except for ice cream sandwiches. You know. I didn’t think I should put an ice cream sandwich on top of zucchini noodles with shrimp, but I’m sure weirder things have been done in pregnancy. Maybe? Last time I was pregnant, I thought that mac and cheese crostini was an EXCELLENT idea.

But this! Not weird at all. Summer shrimp zoodle bowls full of all the summer harvest veggies. BROWN BUTTER SHRIMP. More flavor than all the things! Look at these beautiful curly cues! I mean, still to this day, the spiralizer saaaaves me when it comes to veggies. It makes me want to consume the green things. It makes me look FORWARD to consuming them. So first thing! A bunch of you ask me often how I keep my zucchini from being watery. Years ago (like in the first few weeks of my blog) when I made a stuffed zucchini recipe, I was taught to salt the zucchini and let it hang out on a towel for a while to draw out some of the moisture. I’ve done this with my zoodles and it seems to work too. Right before writing this I googled if that was even a thing and apparently it is! Woohoo!

So if you lightly salt the zoodles and press them in between some towels, after a few minutes they will release some of the water. I like to sauté my zoodles in a bit of olive oil and garlic for extra flavor, but the key is that I still like them to be somewhat crunchy too. As long as I don’t ACT like they are pasta noodles, I love them. I like eating them with some texture and crunch, you know?

I AM THE TEXTURE QUEEN.

That sentence above is a running joke in our house because Max runs around shouting that he “neeeeeds” things. Which he probably learned from me when he was trying to take my notebook or pen or something and I’m like “oh no buddy! I need that at the moment!” What else what else! There are all sorts of summery things on this bowl. We have our zoodles topped with brown butter shrimp that is divine. DIVINE! And I’ve been weird about shrimp since I was pregnant with Max so if I’m loving it, you will love it.

Summer tomatoes because they are about to be the best of the season! Slice ‘em and season ‘em and try not to eat them all. Grilled corn because hello it’s July and do I EVER share things without grilled corn in July? I think not.

And blistered shishito peppers! So much freaking flavor here, I can hardly stand it.

Oh oh oh! And some marinated fresh mozzarella. Can’t forget it. I also cannot do anything without cheese, in case you haven’t noticed. I’m sure you haven’t.

Lots of herbs, because I managed not to kill anything in my garden aside from one bunch of tomatoes that I accidentally snapped from the stem. Bah.

Nothing else, besides all of my freakout excitement in eating a big bowl like this that tastes amazing and is actually good for me. That’s real life. 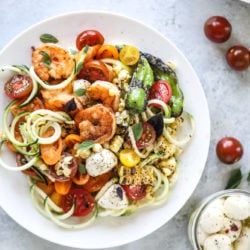 And it has all these bright colors too, so obviously!