There might not ever be another way to eat oatmeal. 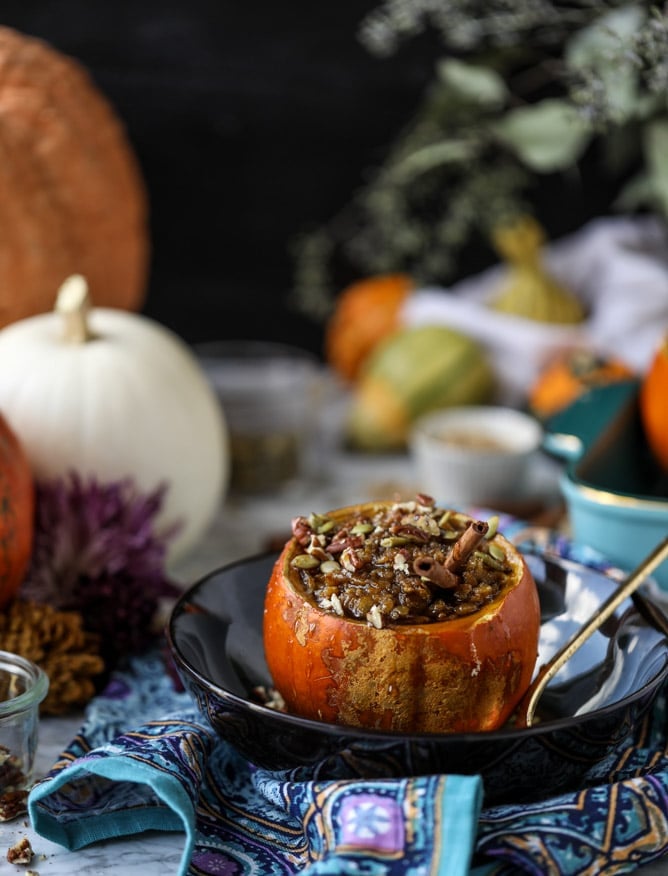 A slightly crunchy, sugary topping that is crisped up on pumpkin pie oatmeal?

My life is over now that I’ve discovered this.

I’m also very much considering if this is a legit breakfast that can be eaten every single day. Probably not. I also really love this sort of oatmeal for dinner occasionally too though. Perhaps that is more acceptable. If you’ve been following me for a while then you know that one of my most embarrassing secrets is how much I loved (um, still love, present tense) the Quaker instant oatmeal packets. But that’s it. I couldn’t really get behind real oatmeal unless it was full of tons of brown sugar.

Which this one sort of is. Sort of!

But it also has a lot of pumpkin and I think that’s a vegetable so we’re good. And there is fiber and stuff. And cinnamon and spice!

This is practically kale if you ask me. So! You totally don’t have to put the oatmeal inside of these little sugar pumpkins. I did that for fun. It’s obviously more time consuming but I do love the presentation if you wanted to serve this for some sort of brunch or what not. You could prep the pumpkins ahead of time (like maybe the night before) and it would be worth it because they are so cute. But. The key here is to make the brûlée topping (that I first saw on serious eats) and throw it on top of the pumpkin oatmeal and let it get all crunchy and amazing and sweet. Texture perfection! I love this on top of oatmeal so, so much. It’s the star of the show here. Now I’m wondering if we could do that bourbon oatmeal inside of these pumpkins? I’m thinking yes. This might kind of taking breakfast for dinner over the top.