I’m convinced we all would like oatmeal if we made it with bourbon. Oh yes. We are going there today. Making banana, bourbon and pecan baked oatmeal. I’m thinking we can call it lunch or dinner too because it’s just that good. It’s certainly perfect for brunch. Or breakfast by yourself.

Or Saturday night… I mean that sounds just as good to me. 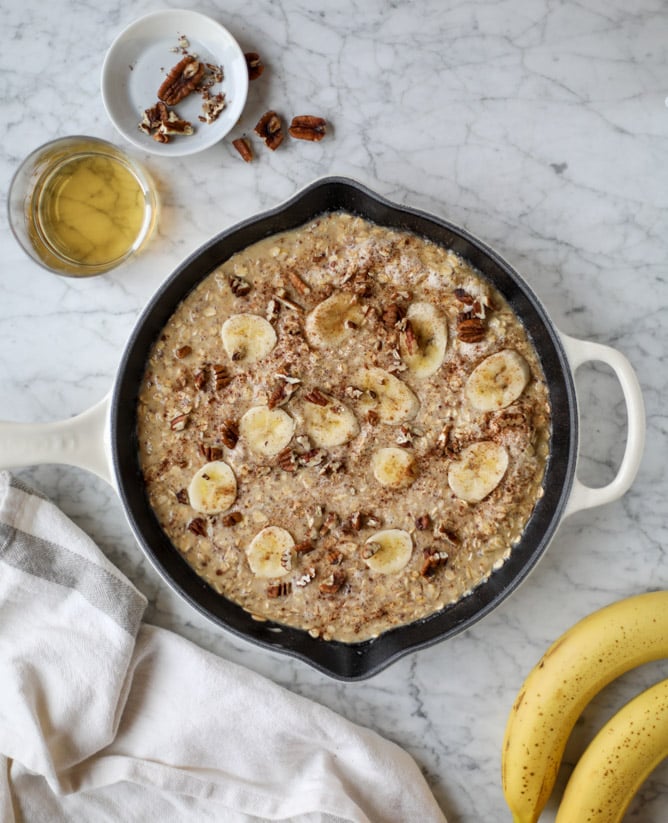 This recipe comes from Megan’s of Country Cleaver’s new cookbook, Cast Iron Gourmet, which makes anything and everything in a cast iron pan! It is so cool – there are SO many recipes I want to try and it’s another one of those books where tons of pages have a corner turned down.

I’m obsessed because there are lots of savory recipes and tons of sweet ones too and it’s like the best of both worlds.

My mom still uses a cast iron skillet that is close to 100 years old (maybe older?) and my goal in life is to have one just like her. Hers is PERFECT is she never even has to season it or anything anymore. Megan’s book also talks about cleaning and seasoning your cast iron which, um, hello I’ve needed for years because I’ve actually thought that I ruined multiple cast iron pans before. OOOPS.

Perhaps my most favorite memory involving cast iron, however, involves Eddie ramming his foot into a cast iron skillet at like 5AM one morning in a sleep haze shortly after we were married and still hadn’t fully unpacked. I don’t know why I laughed so hard. Let’s break down the deliciousness of this baked oatmeal. It’s baked with cream and bourbon and tons of cinnamon. And bananas! Even maple syrup! Some evaporated milk which is like the most delicious stuff ever. Oh oh oh and topped with toasted pecans. And more bananas. And cinnamon!

It has butter too. How could this be bad? It’s just a mess of comfort in a bowl! So insanely delicious and wonderful and comforting and warming. Perfect for fall even though I’m sweltering in late September since it’s 90 degrees. I’m not hating life or anything. However, even with the heat wave I refuse to miss these first few weeks of delicious autumn recipes, like loads of apples and warm soups and baked oatmeals and even last night I miiiiiiight have made beer cheese and pretzel buns for dinner after making them for a cooking class on Monday evening. The thing for me is that baked oatmeal is by far my favorite way to eat oatmeal. It just adds something so much… more. It’s almost cake-like or something. I can try with all my might to make warm, fresh cooked oatmeal in the morning and enjoy it, but I never can get into it.

Unless I start adding loads of brown sugar and bourbon to it? This is still a health food, right?