Let me introduce you to our new favorite meal. 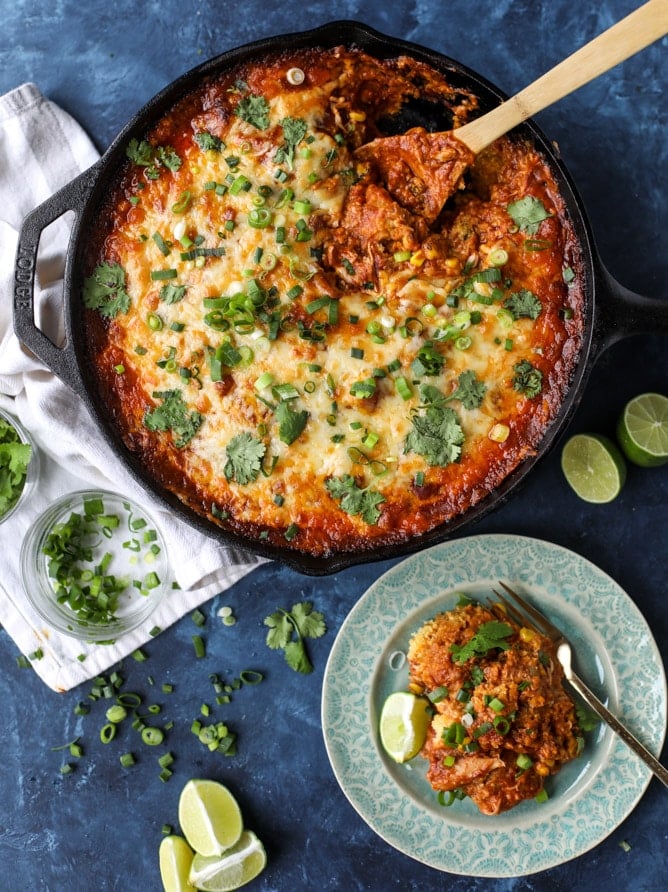 When I told Eddie that I was making chicken tamale pie, he looked at me skeptically because he had no clue what it was. The minute the words “cornbread base” came out of my mouth, he was all SOLD! before I even could tell him what else was in the dish.

Really, this skillet here is made up of every single thing that he loves and mostly of what I love too. Going to eat it forever. Okay bye. 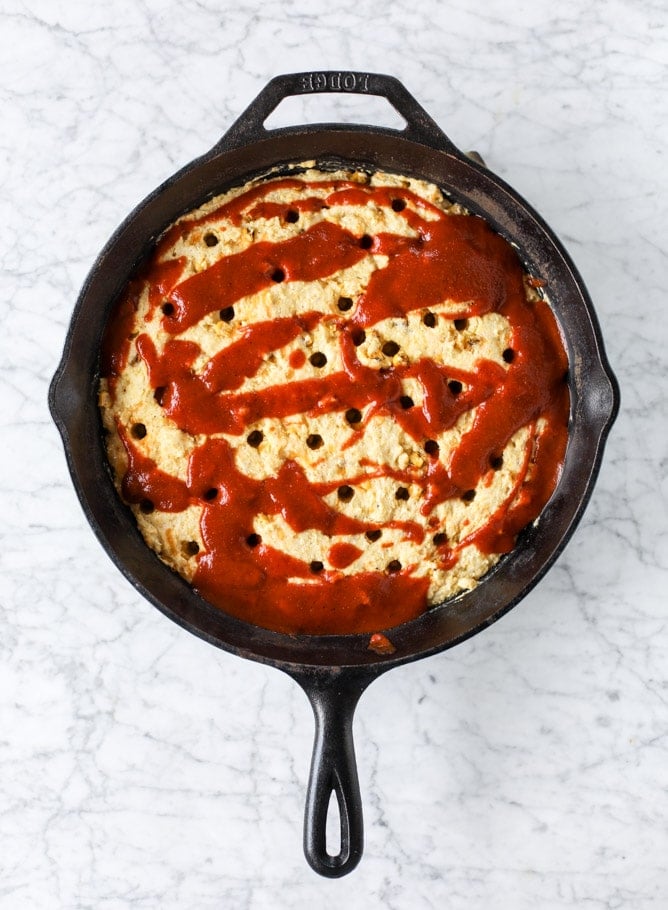 Now, it’s not the prettiest dish when served. There is really no way to serve this warm without it appearing to be a slop-pile mess. But that doesn’t take away from the deliciousness.

Also, can we please take a moment for the cheeeeeeeeeese. 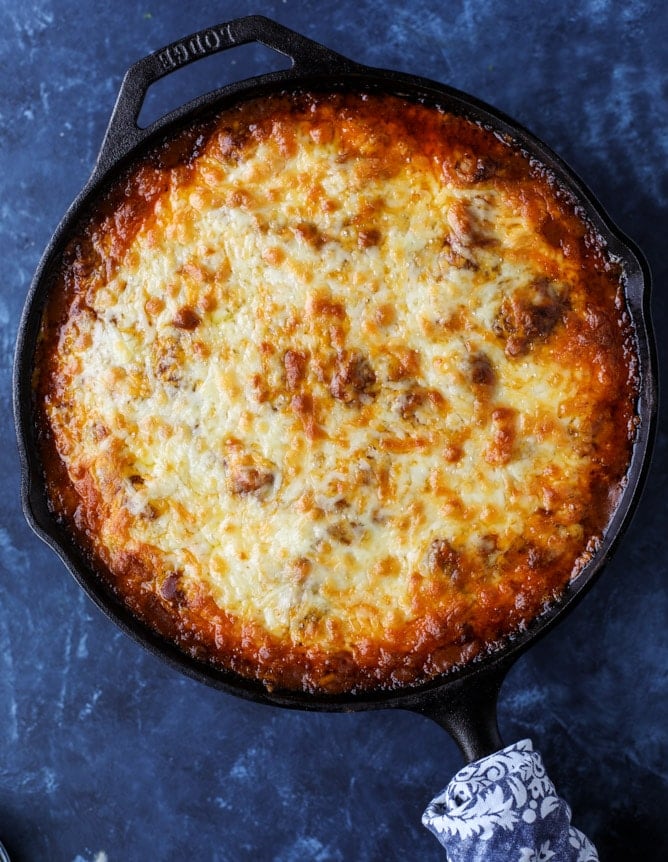 So here’s the thing. This tamale pie is a little on the high maintenance side. It doesn’t have to be. But this one has a homemade cornbread base AND a homemade enchilada sauce. Neither take a long time to make, but there will be multiple dishes adding up in the your sink, FYI. Most tamale pies I’ve seen in the past are made from a cheater’s version which seems completely acceptable to me if you are in a rush. Boxed cornbread, canned enchilada sauce, rotisserie chicken – and boom, you’re done.

If you’re dreading dinner and have to go to the store anyway, you can grab all of those things and throw this together as such. For me, I never have cornbread mix on hand but I do always have ground cornmeal. This homemade enchilada sauce has completely RUINED me because I can no longer use canned sauce (nor do I want to) and it really only takes 10 minutes. It is so freaking flavorful! The ingredient list looks long but it’s mostly made up of spices that go in the sauce – traditional “taco” ones that you most likely have in your pantry. If you’re missing something like smoked paprika or cayenne, leave it out! No biggie. I’d say the chili powder and cumin are the biggest game players so as long as you have those, you’re golden. And then for the chicken? Well, rotisserie can totally work. I had some leftover shredded chicken breasts from making a Thai chicken soup a few days before (OMG was it ever good… will tell you about it soon!) so I already had that.

The only other secrets I used? Canned green chiles and the roasted corn from Trader Joe’s. Since we can’t find ears of corn anymore, the roasted corn totally took its place and it was fabulous. Sometimes that corn can almost taste like an ashtray or something, but as long as you use just a bit, it’s amazing.

This combination is seriously straight out of my dreams. As for the rest? You can totally make it your own! Add black beans if you want and serve it with rice if you want something more, but really this is a complete meal right here in this skillet. It’s crazy filling and satisfying and total comfort food. After we ate dinner, I told Eddie that I can see this being a meal that I make once every two weeks until next Spring, because we loved it THAT much. 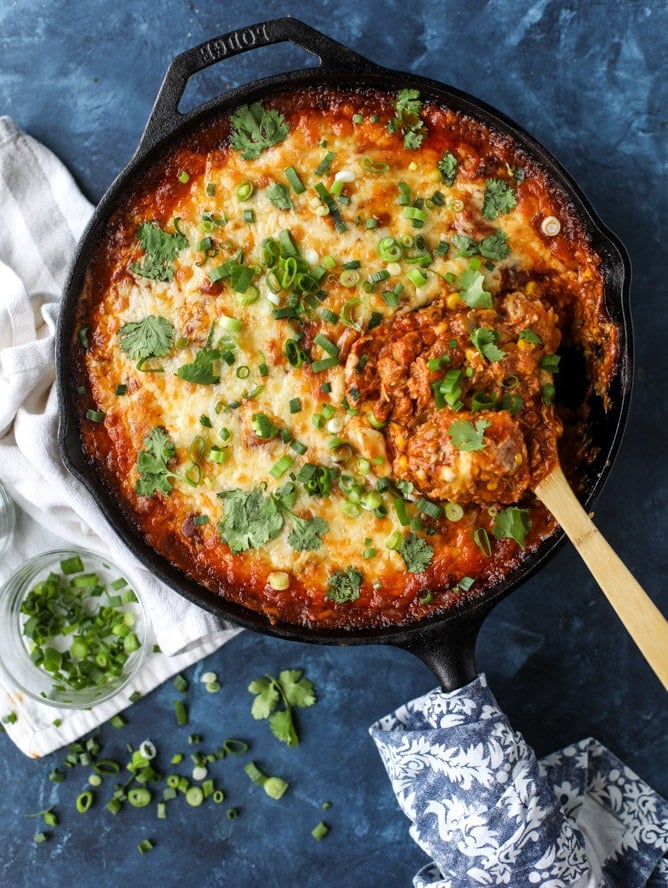 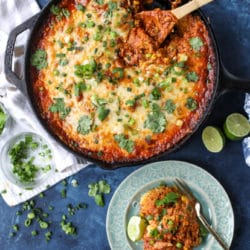