I’m here to tell you that we need to make pumpkin cobbler a THING. 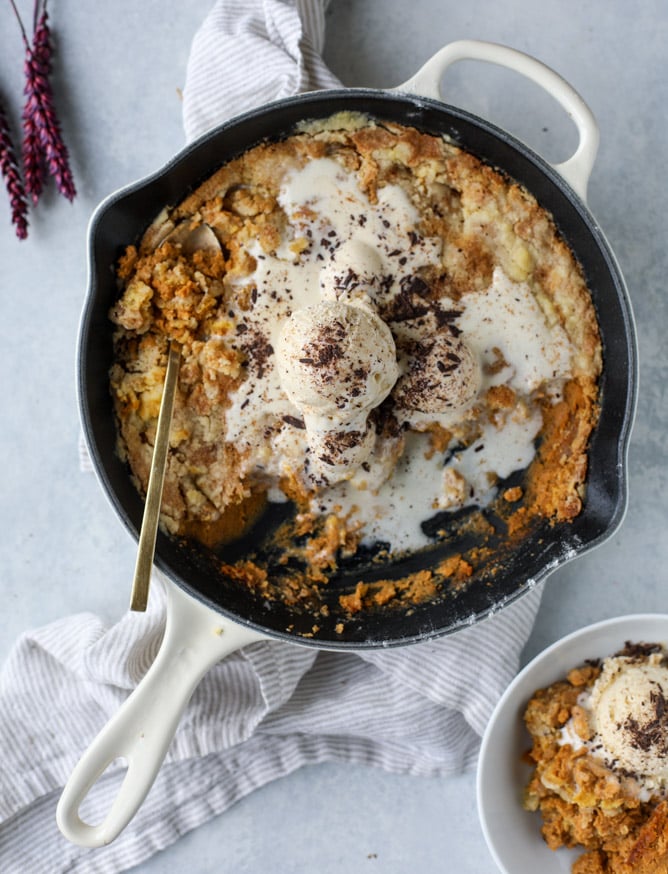 For some of you, it might already be a thing. I didn’t even know it was a thing until I decided I wanted to make it a thing and then it ended up already being a thing. And now it’s one of my things!

It’s okay, you can punch me now. This is how this baby is made! Odd, right? I had to show you a pic so you actually believed me when you read the instructions down below. Because it TASTES LIKE HEAVEN. My initial thought with this recipe is that it would be like the chocolate skillet cobbler, but with pumpkin! It sounded SO delicious to me. And while it is a similar concept to that, it’s also almost like one of those old-school dump cakes where you pour the cake mix over top!

What an unfortunate name though, right? Whomp whomp. Here’s the thing: the texture probably isn’t for everyone. It is like a cobbler-y cake but there isn’t very much crunch. It’s warm and soft and wonderful though. And topped with ice cream? OH MY GOSH.

I want to eat it alllllll. The base is a pumpkin custard-like base and then I made my own “cake mix” (dry ingredients only!) and sprinkled them over top. It’s such a cool dessert and definitely one you can make ahead of time, but in doing that, I’d be sure to reheat it so you get the melty ice cream factor.

And while we’re on the subject of ice cream, I really think this chai ice cream would be ideal with it. SO so so fantastic.

I have ONE more pumpkin-like dessert for you coming this weekend and it DOES involve chocolate, so of course you can take your pick. Sometimes I’m into chocolate and pumpkin and sometimes I just want one or the other. Or all the time I want both. Always.