[This post is sponsored by Rodelle! Thank you so much to my favorite vanilla brand ever for sponsoring this delicious recipe!]

I have the best of both worlds for us today. 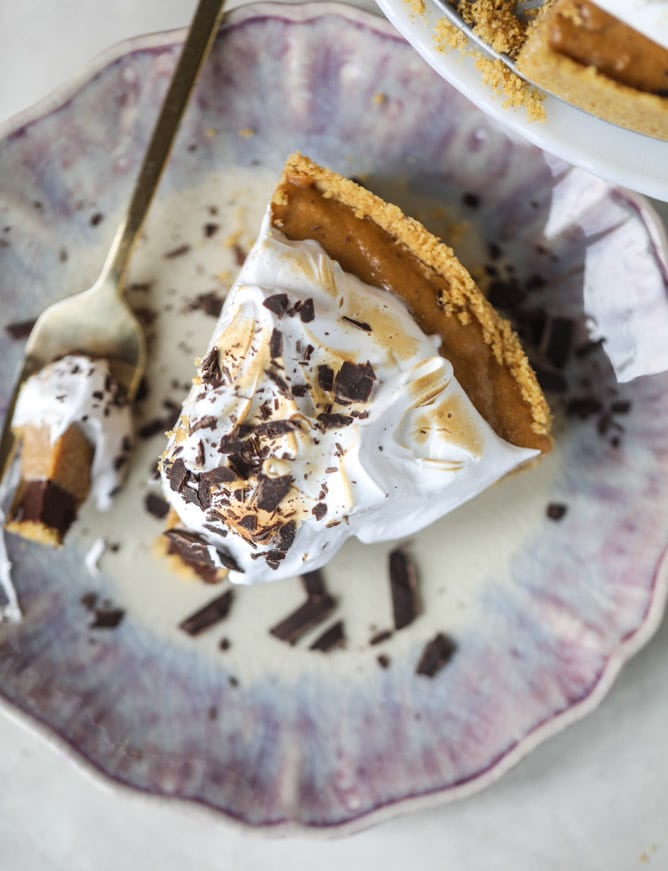 I am almost certain this was made for me and me alone, because while I won’t turn down a bite of pumpkin pie on Thanksgiving, I… also sort of always maybe definitely want a bite of chocolate dessert.

Like I usually take a chocolate dessert to Thanksgiving, wherever it is, purely for selfish purposes and for those like me who would like a bite of chocolate after Thanksgiving dinner. Or let’s be real: the day after Thanksgiving breakfast.

Because after Thanksgiving dinner I can barely move and dessert is often the last thing I can think about. Until midnight when I’m in bed and think I’d sort of like a bite of pie. This post is sponsored by Rodelle, which is my all-time favorite brand of vanilla extract, vanilla bean paste, vanilla beans and cocoa powder. Their ingredients are PERFECTION! Their vanilla is extra vanilla-y and I always have a ton on hand.

In this case, I used the vanilla bean paste in the pumpkin layer since I’m a vanilla bean freak. Those little bean specks? So perfect! If you don’t have the paste on hand, you can use vanilla extract for the same flavor. It has a graham crust because you know how incapable I am when it comes to pie crust. Plus, I like the taste of graham crust more. The base is a chocolate fudgy ganache followed by a no-bake pumpkin custard type of later. It’s seriously delicious! What takes it over the top is a homemade marshmallow piled high and then a sprinkle of chocolate shavings. It is rich and fantastic and perfect for when you just can’t choose what the heck dessert you want after dinner.

And while I’ve gone way overboard with pumpkin this season, when chocolate is involved, it doesn’t even matter. And um, the most important part: it’s NO BAKE!! Yes yes yes, my favorite kind of pie or dessert.

It basically means it is fail proof. You do cook the pumpkin layer on the stovetop to help it thicken up, but that’s it. You can (and should!) make it ahead of time, but wait to top it with the marshmallow until you’re close to serving time. And that perfect bite thought? Oh my gosh.