How on earth is this little man THREE?! I mean, how? It blows my mind because I feel like he was just born. I know that is soooooo cliché and predictable, but it’s absolutely how I feel.

Tonight I even said to my mom that I was petrified of how fast time is going. It’s like it has sped up exponentially since Emilia was born and I don’t know what to do! Make it slow down please. ugh!

But anyway. This boy. 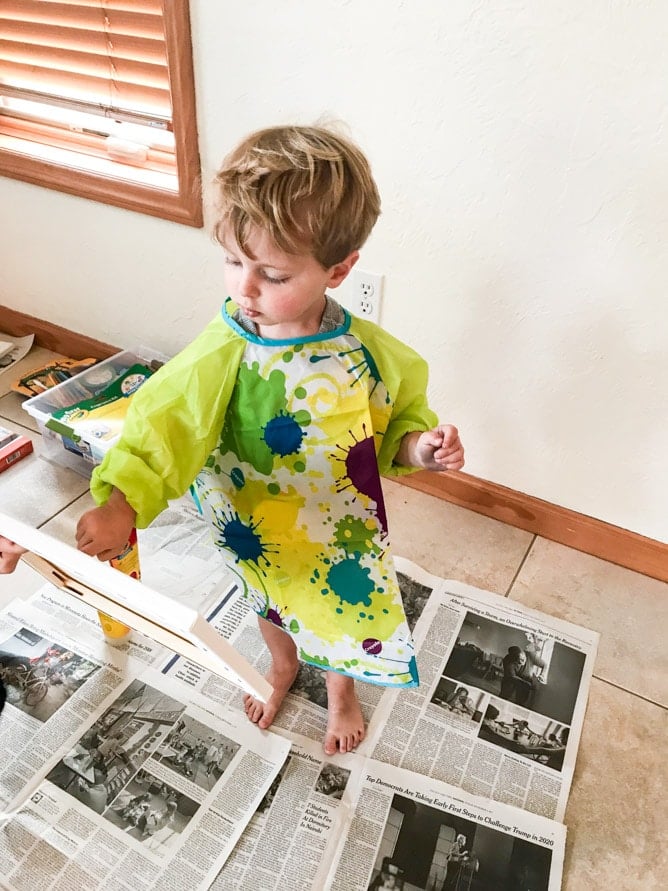 He just kills me. He is so sweet, so funny, so smart. I don’t want to be one of THOSE MOMS but I guess since I have a blog where I exploit my life, this is the page where I can annoyingly be that mom.

I love what a little person he is. I love how he carries full conversations with me and remembers things that happened months ago. Just last week he looked at me and said “oh mama, we forgot to go to New York City this year!”

Like, what?! We haven’t even talked about going given our new babe in the house, so this was utterly hilarious. He is just the best boy.

Max is SO ridiculously fun. He loves to play. PLAY anything. Indoors, it’s all cars and trucks all the time. He takes multiple cars to bed every single night. He also loves to color and paint and do any sort of art work! He loves to bake and help me make pizza dough too.

His favorite thing is being outside though. And playing with others. He loves playing with “his friends” (he says this almost every day!) and the moment he meets someone, they are instantly “his friend.” I love it so much.

And he just cannot wait until Emilia is old enough to play! Every single day he shows her toys and it melts my heart. 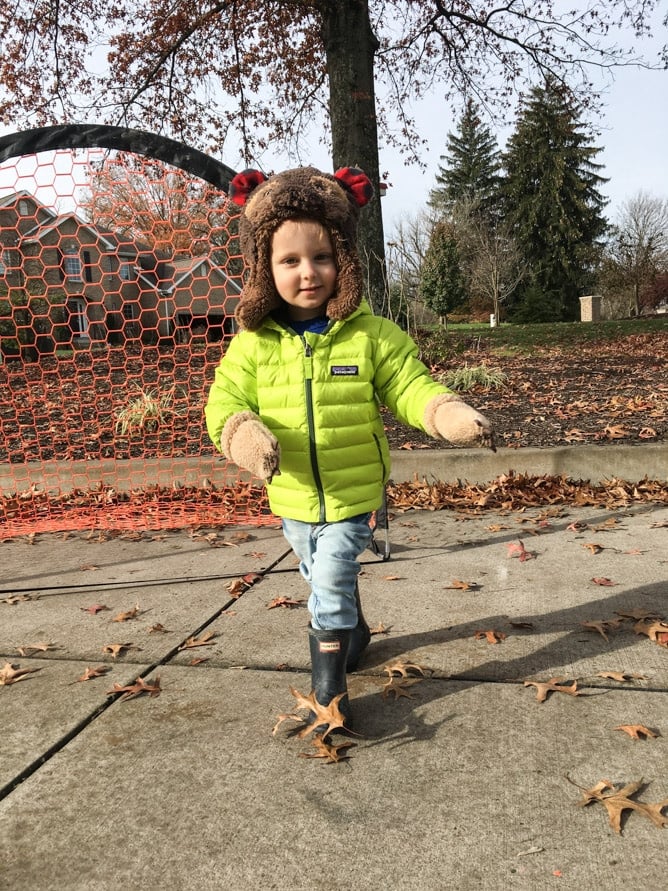 We are obviously obsessed with Emilia in this house, but I still miss my Max and mama moments at times. I mean, for almost three years it was just the two of us all day long until Eddie would come home and we did so much together. Everything together! That has been the biggest adjustment since Emilia was born, and let’s just say that Max is taking it a lot better than me! Ha!

We have been able to do things a few times – just the two of us on the weekends – but there were definitely moments in the first week or two that I would cuddle him after he fell asleep in the dark and bawl my eyes out because I missed spending every moment of every day with him.

Who even am I?! I never expected to be this person! 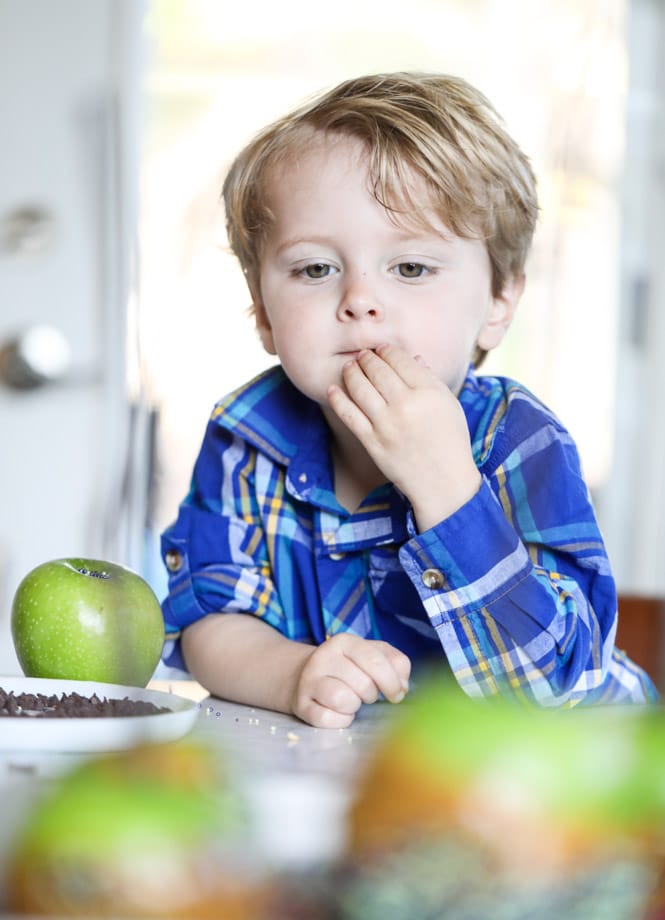 The crazy thing is that Emilia sleeps sooo much and because of that, Max and I were still spending a ton of time together, but it was just… different. You know?! It’s like I can miss him even though he is right here with us.

Fortunately, these moments mostly came in the first two weeks and since then? We’ve really gotten in a groove of it being the three of us. I can’t even tell you how amazing it is to see Max be a brother. He wants to hold her every day. He calls her his “little cutie.” If she is crying in the car he says “don’t worry baby, we’re almost home!”

GAH. I just die. He is the sweetest. At the same time, he is a total threenager. The terrible twos? Never happened for us. Unless you count the last month or so. I wouldn’t even call them terrible twos. He hasn’t been terrible, but he has been turning into quite the THREENAGER. Like, he has his own opinions and his own demands and he is a human! Ugh.

This age is definitely the most challenging so far. It has been a piece of cake up until now. He can be the sweetest little bug and in an instant lose his mind because I put water in the wrong cup. It’s actually hard not to burst out laughing. Often!

Also, this is his “funny face.” Kills me. 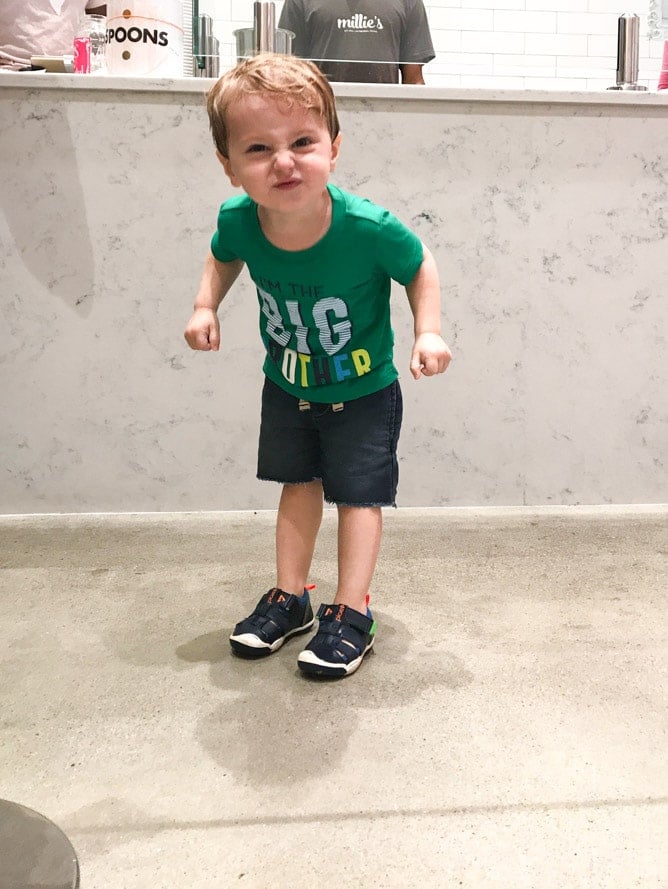 One of the best things about this age is how much Max can HELP me. He grabs things for me and helps me with Emilia so much. He is wildly independent – in fact it’s pretty much a fight every morning about who makes his breakfast. Because he thinks HE can make peanut butter toast with bananas.

The scary thing is that he almost can! It’s just nuts. What a little person! Feeling so lucky that I have this love muffin in my life. He is just wonderful. Thank you for loving him with me!

P.S. later this week, I’ll be telling you about our favorite things over the last few months… woohoo!