All your breakfast dreams are about to come true. One hour cinnamon rolls!

Or brunch. Maybe brunch dreams. Because if we say brunch, then we can have cocktails without judgement and that’s just… super festive. Along with one hour cinnamon rolls, life would be made. If you’ve been reading for awhile then you know that I have a, well… complicated… relationship with eggnog. It’s no secret that I absolutely adore eggnog lattes. Especially iced. They are incredible and rich and decadent, but I also don’t want them past December, so having one month of them is perfection.

Does this rambling make any sense? Since I was a kid, I loved having a few sips of eggnog every December – but only a few sips! Like a small glass is juuuuust right. It’s such a decadent drink and coming from someone who never loved milk growing up… eep. It can be a lot. However! In recent years I have been head over heels for eggnog-flavored things. This very week after Thanksgiving? I usually share an eggnog-based recipe and have done so for YEARS.

So why change it up now? Eggnog based one hour cinnamon rolls are giving me life at the moment. I mean, I have your PERFECT Christmas breakfast right here. !!!!!!

So many exclamation points. So, for the last few Christmases I have made the Pioneer Woman’s cinnamon rolls a day or two ahead of time and given them to people to have on Christmas morning. They are easily some of the BEST cinnamon rolls I’ve ever had. They are slightly time consuming though, so a few years ago I started making a one-hour version. And this year, I made them with eggnog.

And the DREAMIEST eggnog icing. Just look at that!

This recipe is for when you… forget… that you want to make cinnamon rolls, or you wake up and want to make them immediately. They may not be a hugely fluffy as traditional ones that take a few different hours of rising, but they will still rise enough to taste DELISH. 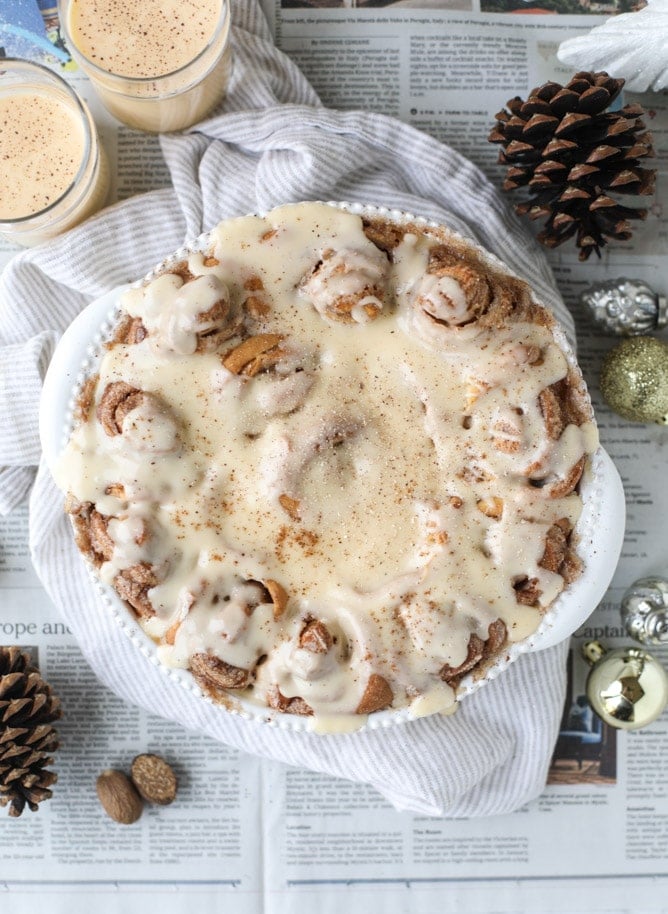 It’s the most perfect blanket of eggnog sugar that I ever did see. And the nutmeg specks! That’s what MAKES it. The best news is that you can even prep these the night before if you’re really feeling it and then just pop them in the oven in the morning. Cover them with the glaze, maybe serve with a shot glass of eggnog (+ bourbon?) and you will be the most popular person in your house. Forever! 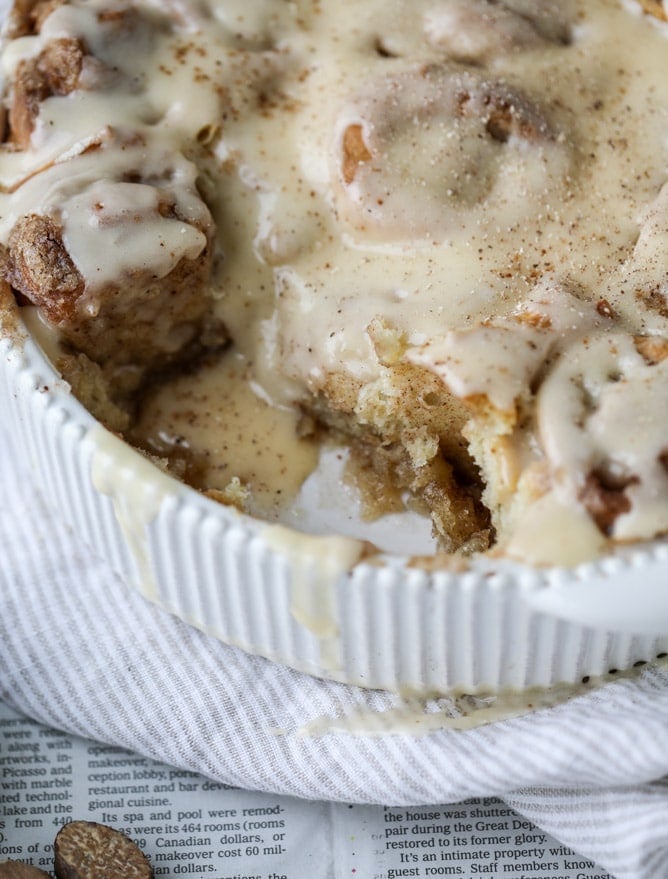 And you should certainly make an extra pan (or three) and pop them in the freezer for breakfast emergencies. You know, like right after New Year’s Eve orrrr the like. Maybe even for January. Be a rebel! 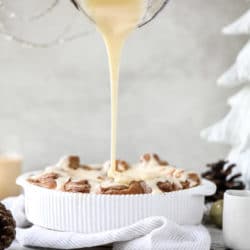 Isn’t that the most perfect cinnamon roll puff?