I have game day eats for you today! Errr… at least not yet. I find it to be awful for meat (four cuts in one week – ruined!) but I do find it to be amazing for rice and beans and things like that.

The replies I got to my instant pot saga were hilarious. Many of you (I even want to say the majority buuuuut) were in the same boat. Saying that meat tastes horrible from the instant pot and that anyone who actually likes meat from the instant pot, doesn’t like to eat meat that is cooked properly. (I laughed for a long time, to be real.) Others said it was the best meat they’ve ever had!

Some of you want the instant pot but think it’s a fad and don’t want to jump on the bandwagon. Many of you don’t have the space for the instant pot! Neither do I. It’s sitting on my dining room table and I want to punt it.

And then some of you acted as if I had just given you horrific news and that I was 100% RUINING THE LIVES OF EVERYONE by not using the instant pot.

People are serious about their instant pots. Let’s just say that. For me? It just seems to take MORE time. It seems MORE difficult to use! More complicated. And I mean, I’m not only talking about the fact that I’m also convinced it might blow up our house.

Perhaps I was completely unfazed by the instant pot because I have used this slow cooker over the last few years that sears IN the slow cooker (and haven’t stopped raving about it – I KNOW!), so that part is not impressive to me. I mean, it was SO impressive two years ago when I bought this slow cooker because that is downright perfect. Less dishes? Seared meat? I love it!

For now, I’m just side eye-ing my instant pot from across the room. We shall see. Okay, back to the freaking meatballs.

So this BBQ sauce? Obsessed. It’s the best combo of sweet and spicy. Maple, which I rarely love on its own PLUS chipotle.

I took the idea of this cherry chipotle BBQ sauce and ran with it. Could eat this stuff with a spoon. I mean, I pretty much did. It’s delicious.

And once you make BBQ sauce at home once or twice? It’s pretty darn easy enough to keep doing.

I like to make the meatballs on the more, let’s say… mini size. The smaller the better! Because they are cute. And then they fit on small sliced of garlic buttered baguettes.

OMG. Yes. I just said that. Put your meatball on a garlic buttered baguette slice and eat it. Devour it. Best thing ever, forever. 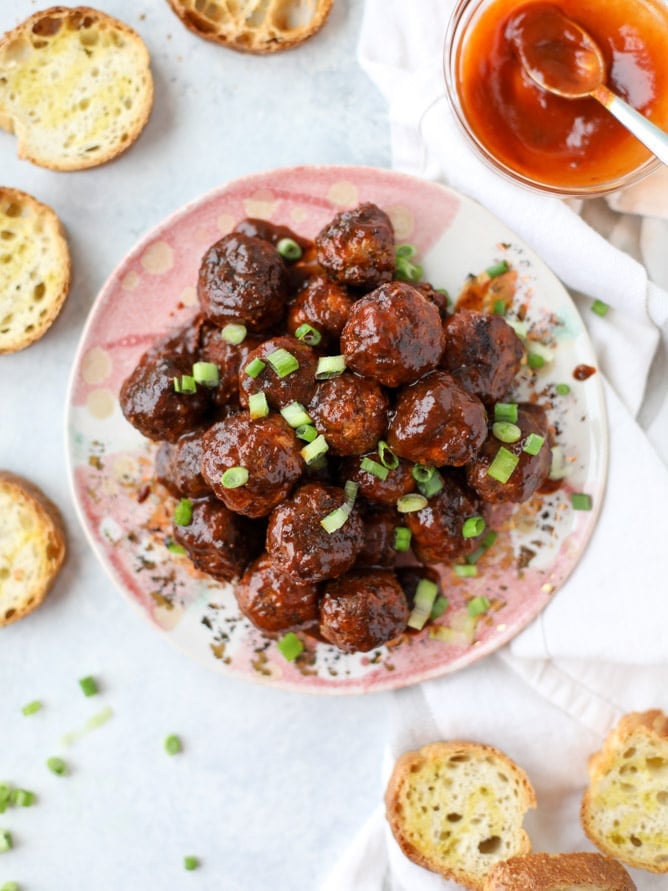 In all seriousness, one of the other reasons that I like these meatballs to be smaller in size is because of the BBQ sauce. Does that sound weird? The BBQ sauce on a small meatball isn’t as overpowering as the BBQ sauce on a large meatball. If that makes sense. Probably doesn’t!

But when do I ever.

And yessss I used turkey for these, but you can totally use beef. Or chicken! Or pork. Maybe a mix of two or three or four. Whatever the heck you would like, for sure. Yep. So I think that I adore this combo of the meatballs with toast because it’s just different enough. Just ENOUGH. It’s different from the traditional tomato-y sauce that you expect with the garlic toast. So very good.

Down below, I’m also telling you how freeze these babies! Back before I had Max, I made the freezer meatballs from Seriously Delish. I threw them into the slow cooker that New Years Eve with a ton of sauce and they were absolutely perfect. Like some of the best meatballs I’ve ever had – so that is forever my go-to recipe. Always!

And now let these take you away. To freeze the meatballs, roll the mixture into balls and place them on a parchment paper lined baking sheet. Place the sheet in the freezer for 60 minutes. After 60 minutes, remove the sheet and place the meatballs in a large ziplock bag. They will stay good for about 6 months! When ready to use in the slow cooker, place them in the sauce and cook for 8 to 10 hours on low heat.
Course: Main Course
Cuisine: American