Hugs hugs hugs for us all! Silky sweet potato soup just SOUNDS like something I want to eat on a Monday. Another big hug in a bowl; a comforting, smooth pot of flavor that is satisfying and generally not terrible for us. I think it’s even accidentally vegan. Fantastic! Let’s chat about it. This sweet potato soup has that melt-in-your-mouth goodness. It’s a little zingy from the fresh ginger. It’s rich from the coconut milk but also light since it’s pureed and not weighed down from any flour or cream.

The insane person in me considered adding a bit of pulled pork to my own personal bowl, but what psychotic brain would do a thing like that? A few years ago I made a Thai curry butternut squash soup that has been a major favorite. It probably comes as no surprise that I adore all things coconut and curry! And I wanted to do something similar but not repeat the curry thing with… just sweet potatoes. They are practically the same thing anyway – I swap them all the time. You know?

So this is a sort of similar yet totally different kind of soup. Because it’s the internet and I said so! It starts with some onions that get all caramely and sweet. This isn’t a necessary step, as without it you could easily have this soup done in about 35ish minutes. But it adds such a lovely depth of flavor – another version of sweetness that still has a savory bite, and when combined with the ginger? Oooh! Going to flavor town.

You can totally use your immersion blender here if you want. I loathe immersion blenders. I think they make a mess ALL THE TIME and they never get soup as smooth as I want it. I’ve tried all the “good ones” too! I’d rather carefully pour my soup in my favorite blender and then boom – it’s whipped and silky and perfect.

On top, I like to add a few things for crunch. Sliced green onions and then some hemp hearts, which end up adding a few good-for-us benefits! You can also do croutons like these garlic toast croutons or brown butter croutons or something else wonderfully crouton-y. I was out of GOOD bread. You know, the Ina kind of GOOD.

An extra drizzle of coconut milk or even cream here not only makes it pretty but adds one more little touch of richness! It’s super creamy and incredible and warms you to the core.

Already feeling better on this Monday! 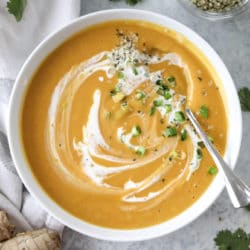 That’s a work of soup art.